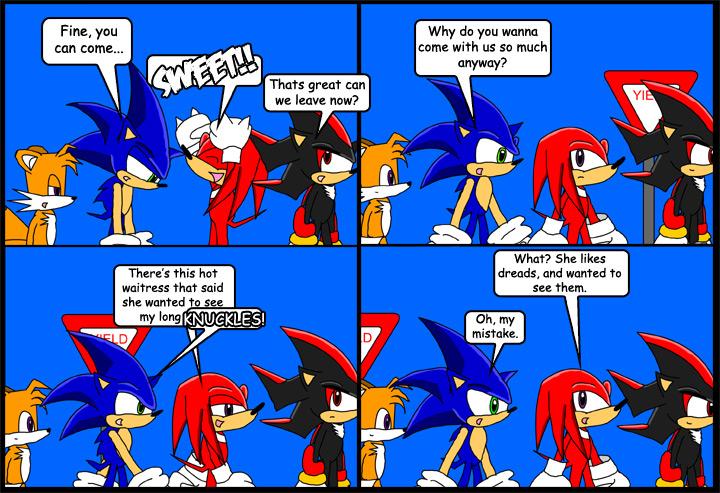 Okay, Okay, Okay… I'm sorry for the huge delay, but in my defense, no one gave me guest comics. It'd probably would've been easier if I gave you an email address, but meh.

Yeah, Its finally occured to me that it takes too long to make a comic, so I'm getting a job and getting a scanner, so I can make awesome amounts of updates. I'm still going to update weekly, but yeah, until I get a scanner, it won't be any more frequent.

Oh, and sorry for the horrible scripting, I just never thought of a good script while I was studying, so sorry.

this is funny man keep doing the comic.i like the funny parts in it

WE BEG OF YOU! COME BACK TO US!

DAMMIT COME BACK, THIS WAS THE ONLY GOOD HAND DRAWN SONIC COMIC!

Seriously. We get a really good drawn Sonic comic and it keels over. Shoot.

This comic really is dead....

Nice. I still miss your Sonic Boom sprite comics. They were classic, man.

There's no excuse for not having updated this for a year.

When are you updating this thing?

Oh, how freakin' stupid of me. I think a mute is in order.

There goes sonic boom, the (to me) funniest sonic comic on drunk duck.

It was more of a rivalry than a competition.

What the fuck are you talking about Zaku? Since when were we in a competition for anything comicwise? If we were in a competition, I'd take updating seriously. Having said that, anyone who still comes here, well, stop it. I'll have like 1 finale comic up sooner or later in this month and I'm done with sonic, period. I just don't like the fact that the characters have preset personalities that I can only somewhat manipulate. I was working all summer trying to make a drawing style that worked for me, and I have a strip in my head that is gonna be 100% not a fancomic at all. Please check it out when you have a chance, first comic will be up next week.

I pronounce this comic dead. In the end Nam, i won after all. Victory for Zeon!

I remember this comic...

I keep thinking how odd it would be for Fiona Fox (Dark red fur. blue eyes. Yellow bow and boots) to come back from Tails's past (has not been done yet. I checked). She was Tail's first crush. Of course that was on a robot duplicate of Fiona. The original Fiona dug out of Robotnik's prison and developed a crush on Sonic. I still check your comic weekly.

I love how insignificant you have become.

Followed you here. Actaully I was here once before but I was'nt logged in...but that's not the point..

That must explain why he keeps them well conditioned.