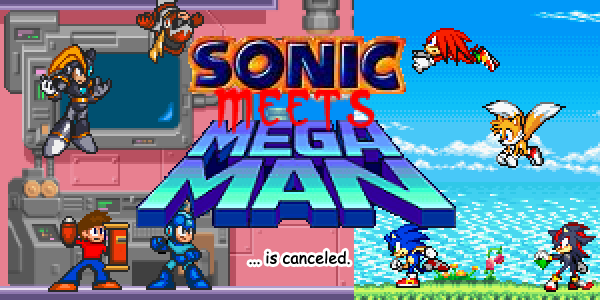 3 years, 6 months, and 7 days ago, I started this comic with the intention of emulating the success of some of my favorite comics at the time, such as Bob and George, Planet Zebeth, and Helmeted Attack. Two of those three have ended, as this comic is now.

In the beginning, I wasn't terrible. I wasn't great either. But I've never really had a story for this. It was always kind of just… “Oh, I like those sprites! I wanna use them!” And then I made some shoddy story around them. While that worked at first, things happened in real life that distracted me from making more pages, which caused me to lose sight of where the crummy bits of story I did have were going.

Now, this is a major problem. It's sapped my will to work on just about everything, because I didn't wanna let go of this. I still kinda don't want to, but it's time to get over it. Hopefully leaving this behind will free me up to work on other things, like my sprites, TMO, and various author comics I'm a part of.

So, finally, thanks to anyone who made a cameo appearance. Thanks to whoever sent in some questions a while back. Thanks to anyone and everyone who hosted this (piece of crap) comic at any time. Thanks to anyone whose ripped sprites or backgrounds I used. And last, but not least, a very big thank you to anyone who actually considered themselves a fan of this comic. Fans are the most important part of a comic, more so than flashy graphics or, god forbid, a plot! So, one final thank you.

And if you have any questions about any part of this comic, feel free to ask, and I'll do my best to answer them quickly. Thanks again.

I don't know. Maybe someday, I could. But it would likely be very different. A lot less filler, for one. A lot more coherence in plot, for another. But yeah, maybe, in the future.

Awwwww, sadness. perhaps you can do a Re-make of this comic in the future?