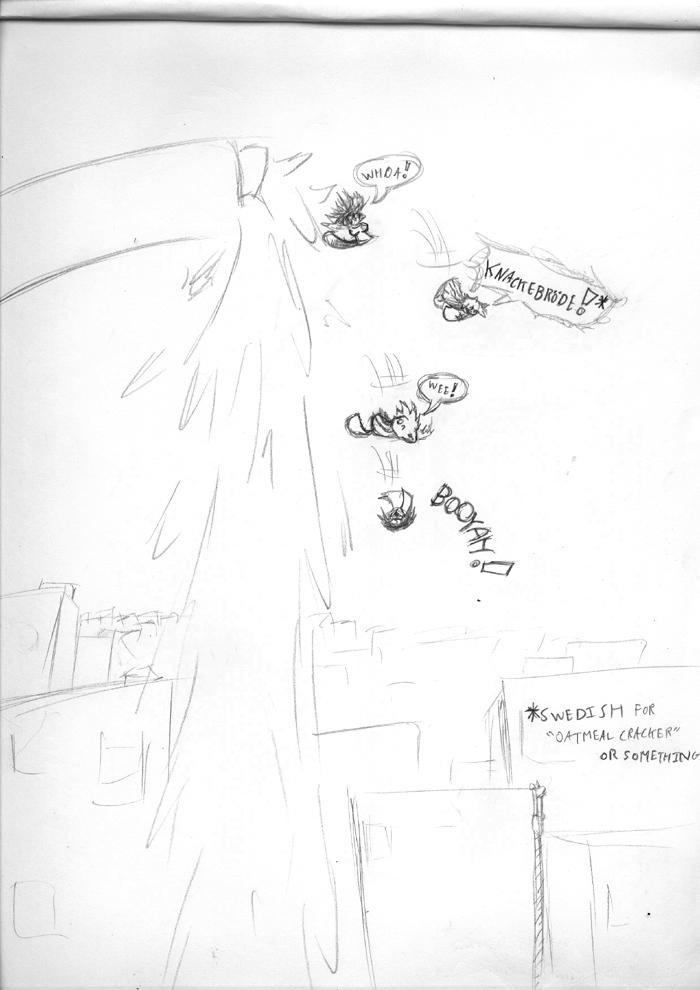 I didn't intend my previous update to seem like a joke from “emperor's new groove”, but after King Reaper brought it up, I decided to expand on that last page, and on that idea.
Also, I had intended sometime to make a villain named “Knackebrode”, (mattias taught me that word… about the only swedish I know…)but I decided not to.
yay?

Recently, though, I've been ffelin' a bit depressed.
It seems like my work is just getting worse, that I'm not improving in any manner or form. Sometimes I wonder if I'm getting better, or if I'm just getting worse at drawing. To be honest, I feel as if I've hit an impasse.

KNACKEBRODE! You are the ultimate in WTF randomness!

[quote]DAMN, that was a fast response. I just updated it like... thirty seconds ago...[/quote] I'm a very brisk reader. I read super fast, and I take in all of it with ease. Magic powers Radec... Magic powers...

Radec, you have to be one of teh BEST comic writers on DD, alright? And drawing isn't the only spectrum of a comic, the writing is just as improtant (though often over looked) So don't just look for visual improvement, and if you don't think you're getting better art wise, look at a drawing you've done a while ago, you'll see what I mean.

I agree with lefarce, forced work always looks like crap. Also ink this one in if you have time, it'll look a lot better.

knackerbrode...I like that. anyways, i can relate to feeling of not improving. i enjoy your comic and your art. You have a hell of a lot more mad skilz than i do. So try not to be hard on yourself.

Whether it was copied or not, that's one of my favorite movie jokes. Let me guess... we're about to go over a HUGE waterfall? Yup. Sharp rocks at the bottom? Most likely. Bring it on.

DAMN, that was a fast response. I just updated it like... thirty seconds ago...

Your doing fine. Just don't force yourself to draw. When ever I do that, my work looks like crap.