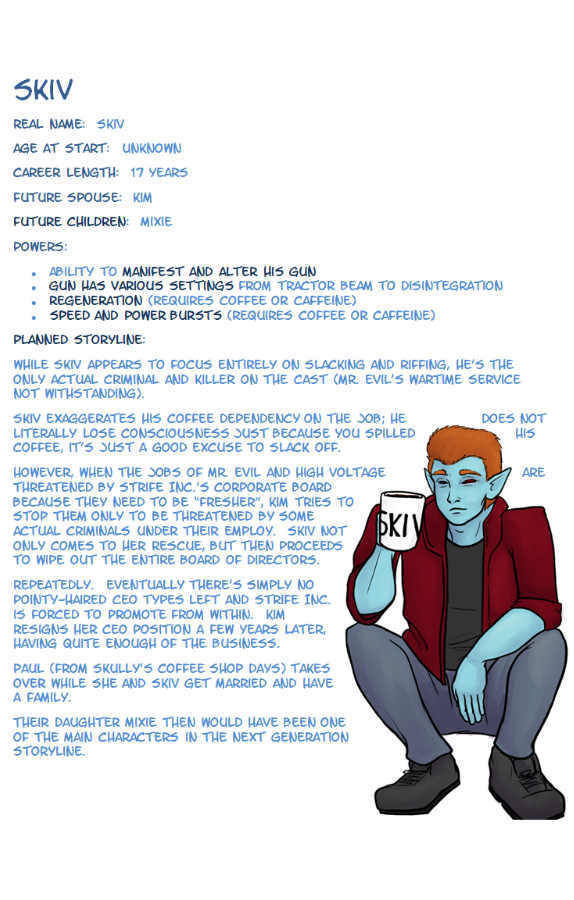 Skiv predates Sans by about 20 years but he's very similar: he appears to slack off and be generally harmless, what he does with his eyes is importance to how serious he is, he knows what's actually going on and is unexpectedly powerful.

Revealing both his actual nature and powers was going to be a pretty late-story thing but it was planned out pretty long in advance. On the Super Temps TVTropes Page, someone asked what Skiv's powers were so I included them in his epilogue.

I'm not quite sure where Skiv's taste for mature women came from other than it just seemed to fit his character given his big-brother instincts towards young women.

Both Kim and Skiv originate from some earlier character concepts. Kim is a grown up, non-combatant (relatively speaking) version of girl named Alison who was originally a cyborg bounty-hunter. Skiv was originally a one-shot thug who seemed so casual about the amount of danger his life was in I decided I liked him. He eventually became the minion of a childish, red-headed, lesbian, demon-like lady.

Why do I have the feeling that Mr. Evil always knew what Skiv was actually capable of? Sorry we never got to see his story develop.

I think in the original draft Mr. Evil *suspected* there was more to Skiv than met the eye but in retrospect the two have probably worked together in the past before showing up on Earth.

I was always curious about Skiv, thank you for including him.

Skiv mostly stays out of the limelight when he can, glad to shed a bit of light on him. Let me know if you're curious about anything else.