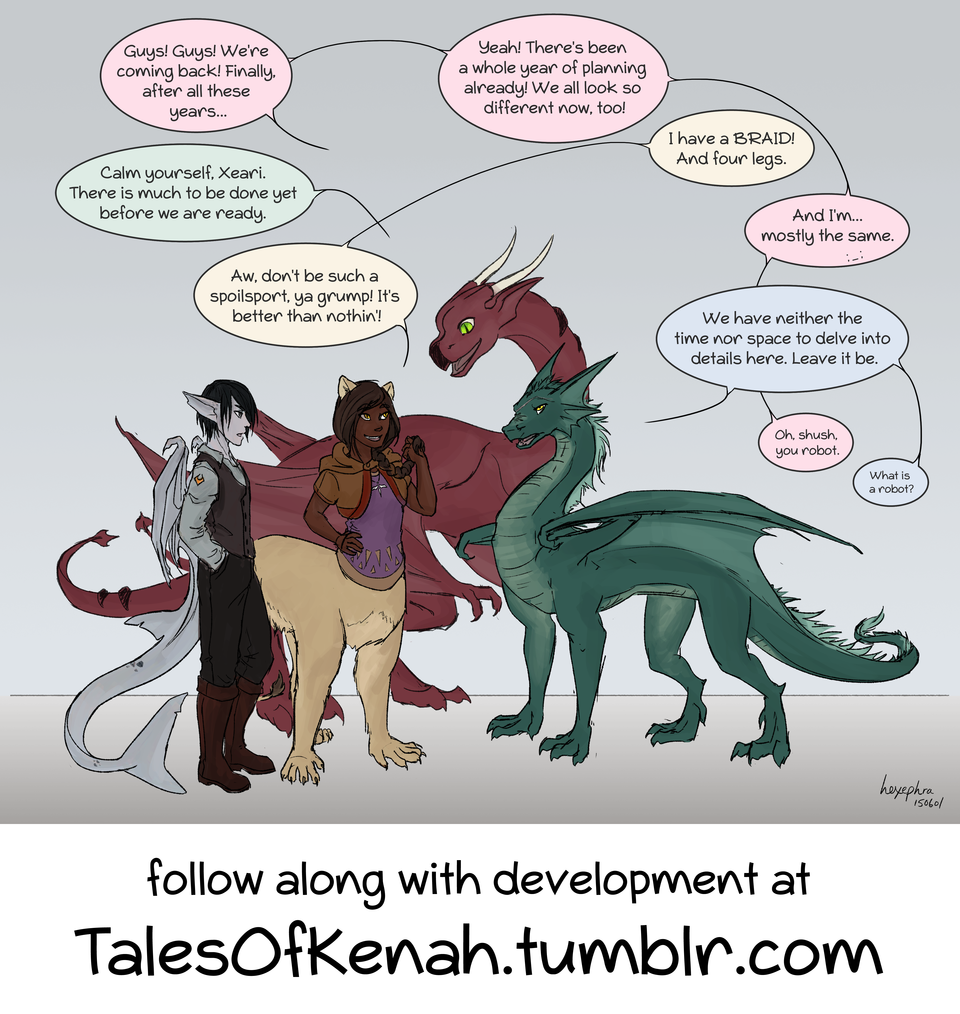 ToK has a tumblr!

Hello? Anyone still there? Hi!
Hoo, boy. Where to begin? Tales of Kenah has been dormant for many years now. I read my last goodbye post (link here) and thought, man, this is so depressing! I really wanted to give up on ToK FOREVER?
I think deep down, though, I knew I'd never really let it go. I took a break, engaged in some other projects, got swept in an out of fandoms, learned a lot. I went to uni for animation, got a job at a game company, struggled (and continue to struggle) with not-quite-depression. But all this time, ToK's been sitting quietly in the back of my mind, resting, quietly gathering the momentum it needs to come back. And a year ago, it reared its great head and said, HEY! THERE ARE IDEAS! And I listened, and I am still listening!
I've been working hard on ToK for an entire year now, working on plot, characters, worldbuilding, and more in almost every spare moment I have. Don't get too excited yet - there's still a long way to go! I'm not even halfway through the plot in terms of planning, and I want an idea of the whole thing before I really start working it into something worth presenting.
BUT! If you still remember this webcomic, and want to see its journey through development, there's a place you can go! Art, worldbuilding, and other non-spoilery tidbits are being posted to talesofkenah.tumblr.com. Come have a look, say hi, catch up on recent changes, and ask some questions! This webcomic never got very far as story goes, but even so, lots has changed! If you want to know a bit more about the characters, read on.
Characters from left to right: Ciaran, Leanael, Xeari, Vark
Xeari has changed the least out of the four of them, both in terms of visual design and personality. She's still bright and optimistic, though a bit of a scaredy cat, and she still loves helping others. Thrown into a new world and a new body, she's pretty unsure of herself to begin with, but she really grows into the situation and ends up really enjoying all this new stuff!
Vark is still the same grumpy old grump, but with even more grump now. He's holed up in his little mountain cave, set territorial boundaries, and scared off anyone in his area. He's a voracious bibliophile in a world where books are still made and copied by hand. He is decidedly NOT happy to be dragged out on this crazy adventure.
Leanael… well, for starters, she gained an additional torso and two legs! She's a Zethyl now, the race of taurs who have always existed in ToK but who have never showed up in the webcomic. She's a lion-based taur, and comes from a little village in a very warm climate. As a priestess in training, she's been sent out to get firsthand experience of the world. She gets a little income by helping people get from point A to B as a navigator and bodyguard.
Ciaran turned into some sort of shark Wevlin. It just seemed fitting for him. His skin is also blue now. He hails from a nomadic clan from much colder climates. He functions purely through logic and is unnaturally strong. The rest must not be said for fear of spoiling the story!
If you liked ToK in the past and want to see how far I've come and how far it will go, head to talesofkenah.tumblr.com!
Thanks!