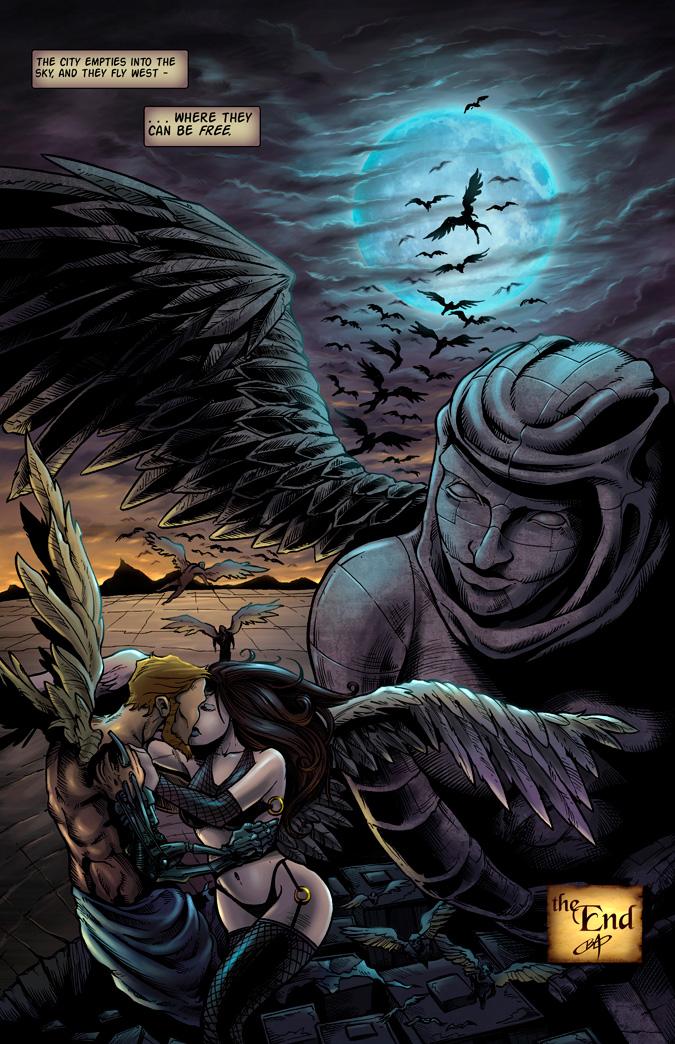 Yes, this is THE END of The Ends! I am currently writing a prequel to the story that explores who Jason was before he woke up in the desert - BUT, to be honest, I can't say when that will come to fruition, or if it ever will (although I hope otherwise). If you think the story ended too early, you'll need to take that up with my wife, who thought the late nights of inking The Ends would NEVER end!

I will post the cover in a few days (turned out really cool, I think).

Also, The Ends will be available in print. I will release details on where to order it as soon as it's ready to go. This was always designed for print, and it looks really, really cool.

If you are NEW to the Ends, this is a great time to read it, because I've recently updated some of the earliest pages.

The Ends started as a drawing exercise for me, and really came alive when I started getting a lot of readers. I want to thank everyone for that, and for motivating me to finish this chapter.

I planned on The Ends being a 54-page stapled printed comic, but as the story grew, I'll admit it became a little cramped. But here we are at Page 54, and I need to take some time off to focus on my freelance work (we're building a house, so I need some extra cash) and, oh yeah, my family too! I remember them . . . hope they remember me! :)

Basically my intention was to write a story about a strange world, and create a comic that was fun and easy to read. I like to leave a lot of room for the reader's interpretation.

However, if there is anything about the story that is just bugging you and keeping you up at night - please post your questions/comments here, and I will try to answer them as best I could.

Thank you so much for reading my story, and for voting it Best Sci-Fi of 2009!

If you learned anything from the Ends: Never forget what you are, and Never sleep with radioactive weapons.

@Senex - thanks man, that's a huge compliment.
@Product Placement - Thanks! The Future Jason's appear because time is so distorted, that the lines between different “time paths” are blurred, and in some cases, merged. The purgatory is a nice theory. I can't say that I really know where they are, exactly. But their world was once much more like ours in some ways.
@MeHighLow - I agree that things are a little cramped. Next story, I intend on pacing it over several issues, instead of trying to cram it into one.
@Seelengst - The Ends will be back some day, cheer up :)
@I Am The 1227 Master - Huge compliment, but I am not worthy! He is a huge inspiration though.
@EVERYONE: THANKS!!!!

most epic conclusion eevar if a little mind bendy.

It was a fun read all in all. Lots of freaky things that go on explained (like what was the deal with the Jasons from the future?) The interpretation that I now make is that this place is some sort of purgatory where the people "living" there had to figure out what they were in order to move on. I'm probably wrong with my assumption but it's as decent theory in my opinion. Congrats with finishing your story. Hope to see more of your work in the future.

wow this is the comic with the best art work and lovely developed ;D hope sometime you make another one we (your fans) ahhaa will be waiting for it ;D

Great Job with the comic! Thank you.

i would buy this stuff in print anytime man. just perfect comic with some amazing artwork.

Amazing amazing stuff this story has been. Thank you!

super amazing, your backgrounds and color are the best

This was just amazing, one of the most original stories I've seen in a long time. Also I love that moon on the last page there.

What an epic story!

Just love it Brian. Many thanks for the great story and art. I truly look forward to your next project and will make sure to stick around for your return to DD.

Ok, great ending, the story felt a little cramped up at places, like there was too much going on too fast, but man, what a ride it was. And it is such an achievement to finish a full 54 comics, it simply makes me want to shake your hand and shoulder vigorously! Hope there's not a hidden mouth there... A solid 5 all the way, man and keep coming back!

its been an awesome ride, thanks!

Whhaaaaaaaaay? The end of THE ENDS? Well, the only way you could make it up to me for that is a printed comic, LOL. I'll the first to get one. Thanks for the great comic here. It really made me strive to improve that art on WarriorBorn. Also thanks for the support on that comic. I hope we continue to see you here on DD, or in some kinda comic fashion. For now, Cyberdog out.

Just....just beautiful! 5/5 all the way! This has been a rather epic story ;-; i literally feel depressed that its met its end

Thanks for sharing The Ends with us. Best of luck on building your house.

Brian your the Best!

Very VERY awesome. *high five* Looking forward to more of your stories, but I can be patient. ^.^

The end of the ends? Nooooooooo!

your work is some of the best i have ever seen keep it up :3

Great ending, Brian. I have thoroughly enjoyed the Ends. Stick around DD and I can't wait to see what you come up with next.

You did a good job I'm proud to have someone like you on DrunkDuck and as my final word before i got to school: awesome......

Great ending, great story. I look forward to whatever else you create with this world.