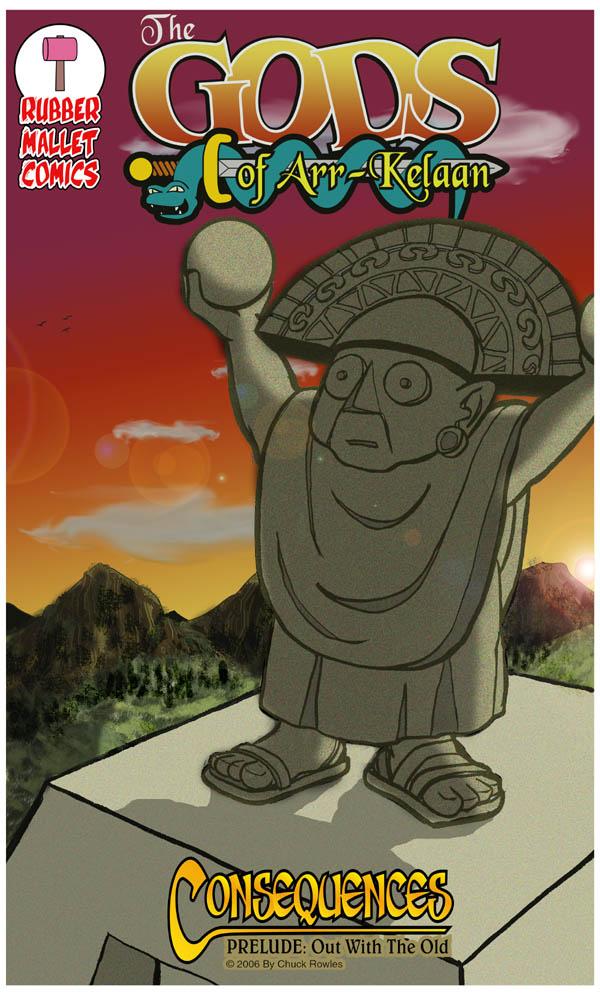 Here we go again, everyone. An all new story that will update every Tuesday and Friday.

I would wager it's something to do with, oh, say, the sun setting in the background with the statue of a sun god in the picture? Symbolizing the downfall of the "old"? Also, the sun is setting on a sun god, heheh.

Well, not so much irony as symbolic touches that no one but you and me know.

There's acually an ironic hidden meaning to the cover, too. Although, unless you have read the issue, you may not get it.

On a light note; the god that the statue portrays looks like he has been staring in to the sun a little too long :) But yes, brilliant cover. Really a work of "breath taking" quality.

All caught up with the fill in stuff. Ha, glad to see I didn't miss any of the story ^^ Wow, great clouring on the cover. He's an adorable little god! Hopefully he doesn't want fresh hearts or drowned babies or anything like that ^_^

We'll know for sure on Friday, I guess. Very good guess, Matt. Did you do a Google image search using "inti" and "sun god" though? Because I think that there's a chance that might just possibly work.

Well, the Incan sun god was named Inti, and was normally seen as a sun disc with a man's face. So that sort of fits. A google image search didn't turn up Chuck's little statue though, heh. It's certainly not the Aztec sun god, Huitzilopochtli, because he was normally portrayed as a hummingbird, or at least would be adorned with feathers and have black skin.

[quote]I must admit though, I don't know what kind of god would like being portrayed like that. The eyes...they never shut...[/quote] [img]http://www.drunkduck.com/The_Gods_of_ArrKelaan/gfx/sungod.jpg[/img] Hint: He's an Earth god...

That's all Steve. He did a great job!

That is a really nice background. I mean, REALLY nice.

Well, looks like the Traveller Gods get to have a bit of fun kicking out the old gods. Can't wait! I must admit though, I don't know what kind of god would like being portrayed like that. The eyes...they never shut...

caption: OH MY GODS... MY BALLS FELL OFF!