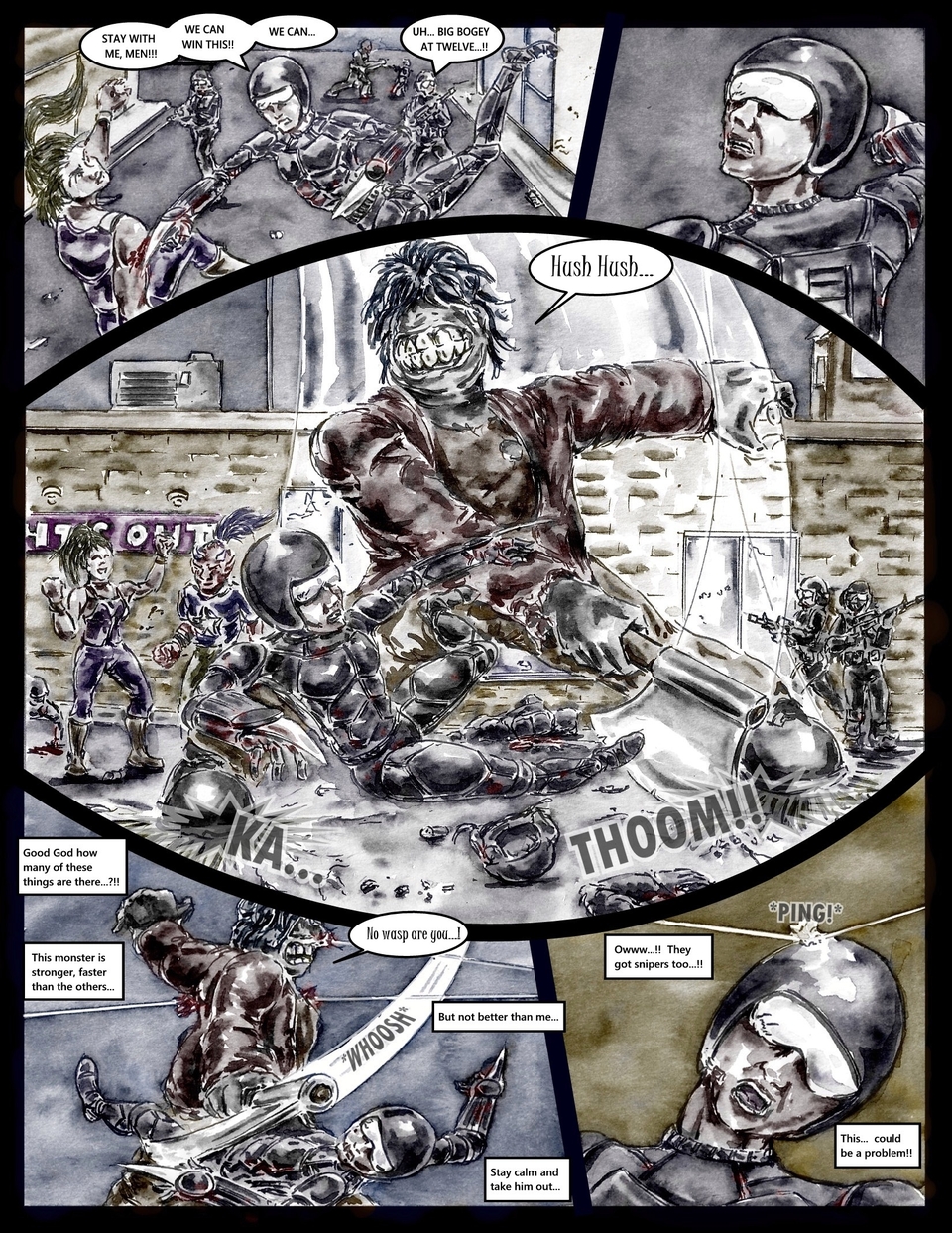 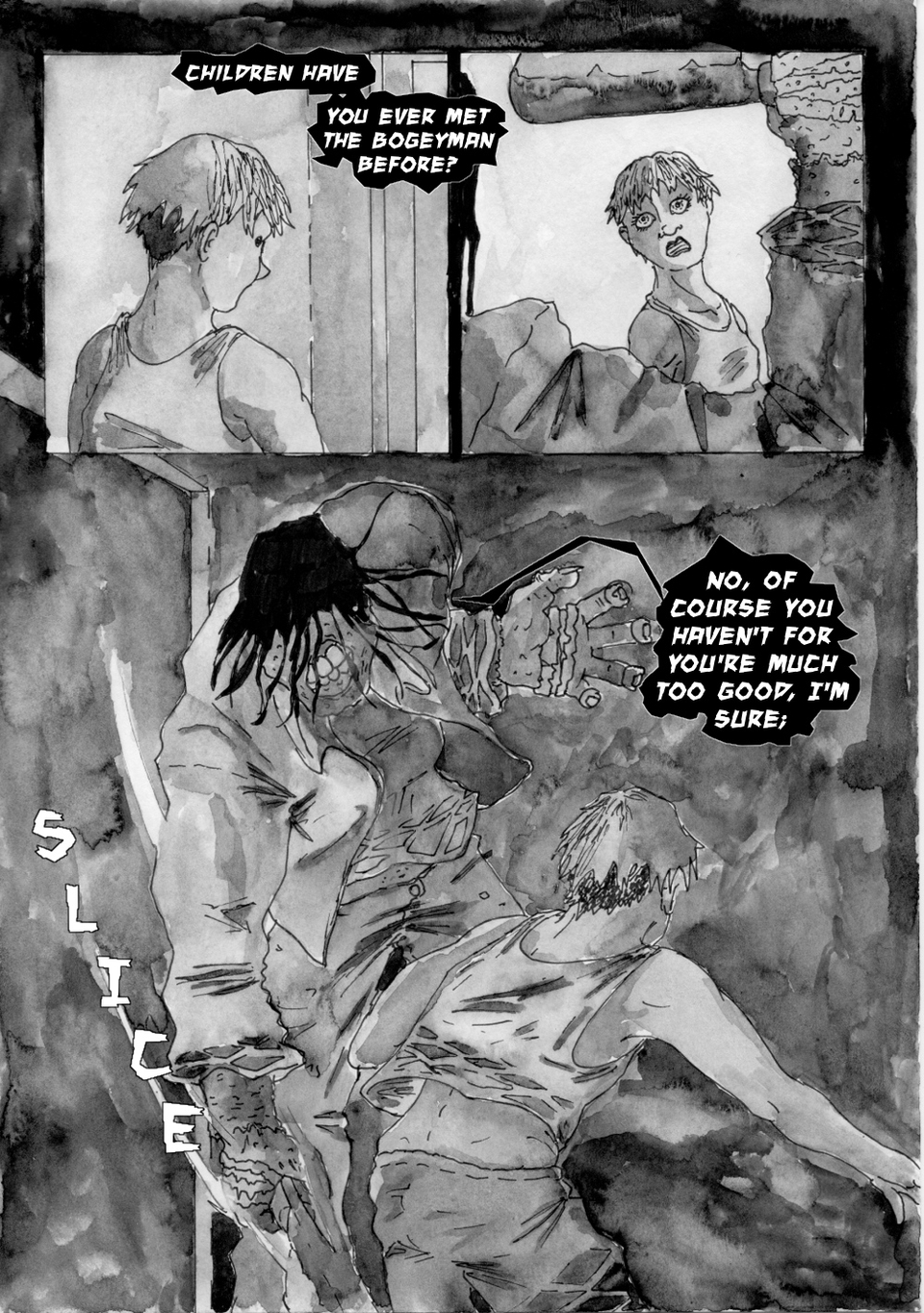 The BogeyMan!! I loved Call Me Tom's comic ‘The Understanding’ more than he did I think, cuz he canned it! But with plans to redo it (I hope)… I especially loved his character Bogeyman! The Monster struck such a chord with me! The way Tom rendered him was so raw and visceral; genuinely scary. I hope we see him again!! I feel confident in that - like Jason and Freddie, some monsters never die!!

And Tom graciously said I could create a character inspired by him…! It's perfect! This story, so dream-themed, and now a real creature from nightmares shows up. I think it'll tie together well in a few pages!

Speaking of pages - delay coming, because…

PC Update!! After my crash, I got a spankin' brand new Alienware Tower that is so powerful I'm afraid it might take over the house, but there are some… issues

My old image editing software will NOT work with it, so I have to learn something new. I've downloaded Gimp (for touchup) and a couple other apps for adding speech balloons, etc… but these things look like Babylonian Etchings to me. There will be a learning curve, so the next page could be delayed a good bit. (had to get a new Scanner to, but that wasn't too big a deal)

But I'm working with it and will have new pages out… not too long from now I hope.

Thanks for Reading everyone, and for your overall support!!

DAMN! As a fan of the Understanding, I cheered when I saw Boogeyman show up. Very scary character. Cool page layout again, as well, giving Boogs a showcase of an entrance! Congrats and good luck with your new PC. I have a similar issue with my old computer failing. Keep meaning to look at Gimp, too...

THANKS!! Seems lots of us were fans of The Understanding and Bogeyman!! I've been messing around with Gimp on the New PC - things are starting to come together... sorta :D

HOLY FRIGGIN MOTHER OF....How the hell did my brother end up in this comic? How did you know what he looked like?

Okay, I was literally thinking in my brain that the BOGEY guy might have been the same 'Bogey' we all know! And as it turns out, that was correct! So quite literally, they have a wild Bogey on their hands!

Indeed! In this story nightmares do come true!

Hope you get your new art programmes sorted soon, I know how frustrating that can be, especially when moving ahead with modern technology actually feels like taking several steps back!

Thank You again!! I pulled some emotional extortion on my brother (who is a Imaging Wizard, adept in all sort of apps) to come by tonight and show me some tricks. Maybe I can lop alot off the learning curve!!

Wow! What an entrance!! That's a truly awesome enemy as well so much respect to the creator and praise to you too Kim for bringing him back with such stunning artwork. I never felt Eli needed any support as he has always been so powerful anyway but now Kimberley's really going to have her work cut out!

Thanks so much! The Bogeyman is worthy of all Praise!! :D

Careful the computer does not take over the house or become like Colossus: The Forbin Project.

Great action on these pages. Love the cross over. Call Me Tom's comic ‘The Understanding’ is one of my favorite too.

Holy Moses! I can see how Bogeyman and Eli must have been on the best of terms instantly. ;)

You say your moldy oldy software won't work on your new PC? Have you tried running it in Compatibility Mode? That's what I have to do to get my old Photoshop 6.0 to work properly. (yeah, I'm outing myself there... I use Photoshop 6.0!)

I was using Microsoft PhotoDraw - it came with Office 2000 ;) It won't even install! I read lots of forums and it seems to just finally be fully deprecated!

Oh cool! I recognized Old Bogey right away. Great likeness, and a lot of bad news for Team Luster.

Go Bogey! And remember the best thing to take out a sniper, is another sniper. It's all a question of good spotting. You know Special Forces units may be incredibly bad ass but they have a tendency to get overwhelmed and need plenty of support. So where's the goddamn support? ;)

Haha, well, keep in mind that I've only seen examples of 'special skills' teams performing deep penetration search and destroy missions via movies - and in the movies I've seen plenty of them get overwhelmed like this (Aliens, Resident Evil...). My thinking was this group was trying to sneak in undetected and find Eli (not knowing exactly where he is). Once they found him and got a chance to setup an 'encounter area' then they'd deploy snipers, but they got surprised-ambushed before they had a chance. Kimber Lee was supposed to be their advanced scout/lookout but, somehow, they avoided her detection by moving in from other directions... almost like the freak brigade knew they were coming... ;) But they do have backup, of sorts - wait and see!

Ha ha ha ha ha! Fantastic page! Ol' Bogey dose get around! Looks like he is also moonlighting for the Trump administration! http://valkyries.thecomicseries.com/comics/14

Haha that is so cool! Did he ask you first (at least I asked you ;))

Gimp has a bit of a learning curve, but it's a robust program. There are probably lots of tutorials on youtube. I hope all goes smoothly with the new computer and all the new gizmos.