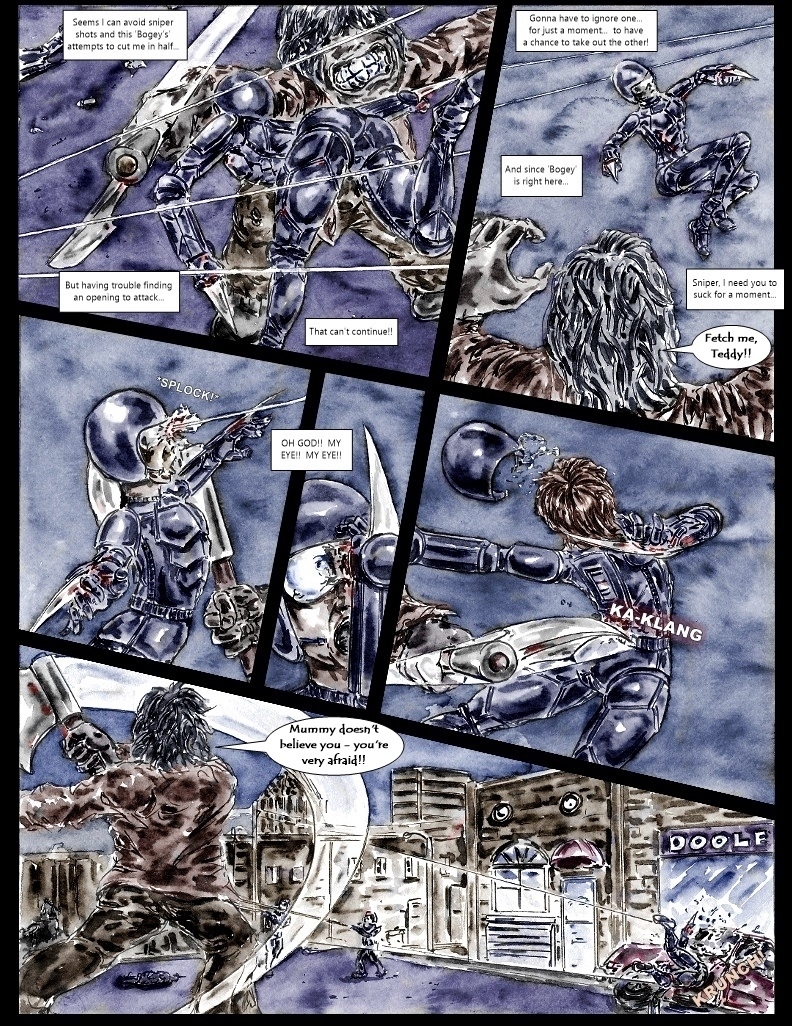 Well, here's my first page using GIMP for editing (really just enhancing color and shadow) and using IPhotodraw for the Text and Balloons. I'm actually figuring out GIMP relatively quickly I think (how to use layers, paths, brushes) - in fact, I'm contemplating an attempt at doing the color for an upcoming page using Gimp (I'd still have to draw and ink everything on regular paper and scan - ain't no way I could actually draw digitally). Anyway, thinking about it!

No matter what I decide, I'm back in action! The pages could be a little slower until I get more comfortable I can't see a page ever taking more than a week!

Anyway, the page…! Kimber Lee maybe shouldn't have decided to ignore the snipers first - they have pretty good aim when she's not dodging them. She'll keep an eye out for them from now on *HAW!!* (yeah, that was cringe-awful ;))

(yeah Bravo, I know… Colonel should've used Snipers to counter Snipers - let's just say they got ambushed before they had time to take positions… I remember in Saving Private Ryan, they had a sniper, but they were on the move a lot and he wasn't always in a position to snipe away ;))

Whew! Thank for Reading Everyone!!

Whoa! The shot to the eye was a shocker! Looks like your transition is working well - a lot of challenges on your end, but it seems quite seamless as a reader.

Hey Avart thanks so much!! I used a very old software called PhotoDraw (it's a Microsoft product). It was simple but plenty robust enough for what I was doing (enhancing color and shadow, adding shapes and text (good for speech balloons and panel borders)).

Be careful what you ax for Bwahahahah!

Nice work using the GIMP for editing! GIMP is a good free alternative to Photoshop for sure, I used to use it and did a lot of the same stuff as I do in Photoshop and Manga Studio :3! And man, Kimber is learning a huge lesson here, but it's gonna cost her an eye it looks like x.x...

Thanks, Peipei! It's coming along. I used it to try to paint a little and that sucked! haha! Yeah, Kimber Lee made a wrong choice here but... Well, you'll see next page! ;)

I had a nightmare about this guy last night

Me too - this sucker gets around!!

I noticed this page looked a little different from the others, but couldn't immediately put my finger on what had changed. Looks like the transition went smoothly enough! Some harrowing developments here. I guess Kim can at least be thankful she wasn't cut in half, but if those snipers are good enough to hit you in the eye mid-jump, maybe not a good idea putting them on the back burner?

Yes, the transition, while fairly bumpy from my perspective, hasn't been a show-stopper by any means. Every time I sit down and work with the new programs I learn something new so, who knows, maybe I'll figure out how to make it do it all for me!! :D And yeah, Kimber Lee has had issues with snipers in the past - she shoulda known better!! But sometimes options seem limited when you're under fire I guess... :)

You seem to have a thing about people getting it in the face these past few pages but it certainly has the desired shock value! Love the guy slamming into the car in that last panel and as always the snappy chat! As for the art, I'd forgotten you had swapped progs so everything looks pretty much the same as normal to me. The only thing I have noticed is that the linework seems much finer and the type a tad smaller so I'm not sure why that is. I flicked back to last weeks page and the lines are much thicker and softer. No complaints though, tis still as readable

Haha I guess I do fall into patterns!! But, maybe it's like zombie movies - everybody knows the best way to kill a 'Godstrained' is to go for the head!! And yeah, my new editing apps can't do everything my last one could do, but they also do more at the same time!! I suspect my 'look' could go through several changes the next few pages ;)

Thanks for the link to the lyrics. I wondered about the "Mummy", since Eli didn't srike me as having much of a feminine side. :) And that sniper did suck, but too hard! I love working with GIMP for some things, but when I tried colouring with it one or two times it kind of made me return to watercolours very quickly. Not that it didn't work - it worked quite well to some degree, only I found it so tedious, just like all that work on a screen is generally tedious for me. But then, I perhaps just lack the patience and computer skill for that. I'm curious how it'll work out for you.

Haha yeah, those Lyrics are really creepy when coming from something like Bogey - Tom really did a wonderful job with that creation!! I'll let you know how Gimp goes :D

Thanks so much - and welcome!!

The GIMP work is looking good! Next thing we know, you'll be using a Cintiq to do all your art XD

Thank You! Me using a Cintiq - wouldn't that be something!!

Have you tried paint.net ? Not as complicated as GIMP. Kind of a free photoshop. http://www.getpaint.net/index.html

When deciding what to replace my editing software with I looked at it, along the Gimp and a few other 'free ones'! Gimp seemed to have the best 'PR' so that's what I went with. Maybe I'll download paint.net and just take a look..