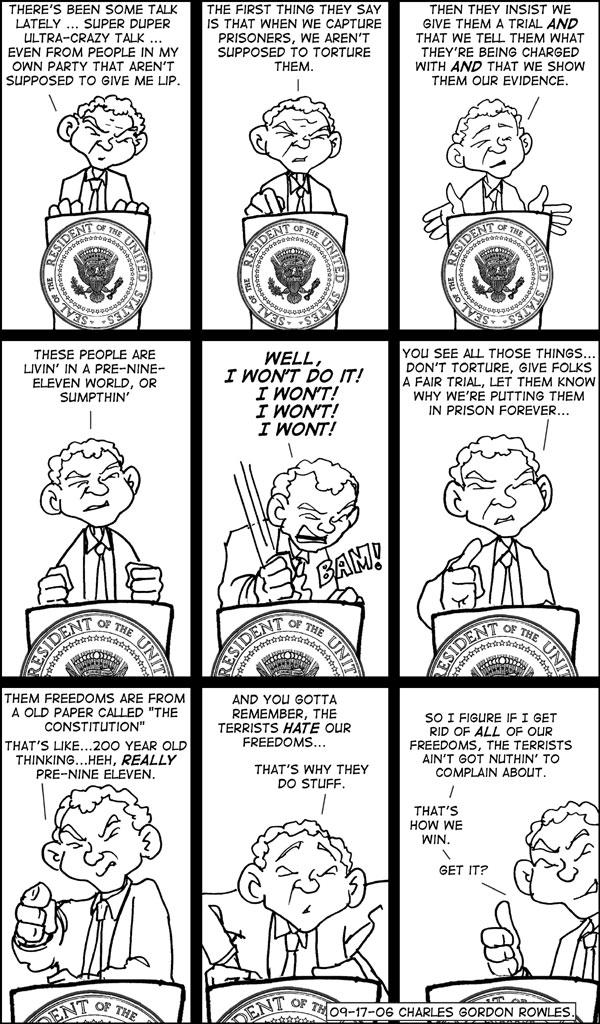 They Hate Us For Our *BELCH*

1. The other comic I work on (a lot harder than this one) was getting behind.

2. I found myself often angry and not in a humorous mood towards our leaders.

The debate over torture and disappearing of people we allegedly picked up for terrorism goes on.

There's a lot of articles you can link to about this. Most are written as if the choice to treat people as subhumans is a viable option, and I guess you'll have to decide if you like your tax money spent in this manner.

I don't. I tend to think that nothing shows our enemies that we won't budge from our belief in freedom than actually being free and treating everyone humanely.

Oh yeah, just so you know, there is no reported evidence of the tortures we put people through having actually prevented any terrorist attacks. Think about that for a few minutes, too.

I miss this comic.

Wow I read this and realized I just heard a comedian use the same line the other day but then I saw how old this toon was and realized he ripped you. Way to be cutting edge

wait, ronson is doing this comic? no wonder its interesting

Ronson. It wouldn't be you without the hard core commentary.

just stumbled upon this, great stuff!

Ahh, you should have had this post on September 11th. More symbolic! Bush and friends are a scary crazy bunch, but hopefully now they're on the wain... STupid buggers like Bolton and Rumsfeld have already had the boot! Anyway, funny comic ^_^

Its easy to get frustrated, but remember that it helps to get the word out. A lot of people don't have patience for reading blogs, or diving into the world of wonkery. Comics on the other hand...

I think he is a shinning example of why you shouldn`t drink and do drugs excessively!

This is a test comment to see where it ends up. :)

The real question, unfortunately, is whether or not we still have enough freedom to change the course we're on.