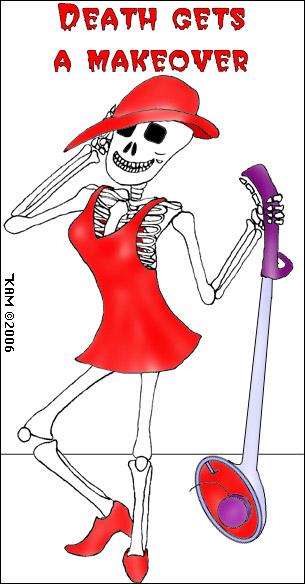 Death Gets A Makeover

A while back on the Life & Death boards there were some comments about Steve being like Garfield & I joked about Nermal showing up as “the world's cutest death”.

While this picture is not of Steve nor Nermal it was inspired by the phrase, “the world's cutest death.”

I considered coloring the background, but trying to decide which of those lines are bones & which are empty space would have driven me crazy (or, at least, crazier) & I gave up.

Man, drawing skeletons is a pain in the *Ahem*.

How does a skeleton have breasts, anyway? Also, I always pictured death as a male, so it makes it seem like Death is a drag queen now :P

Even with tits that's not a sexy skeleton ^_^ Still, it's a very good likness to Calista Flockart!

You're damn right about skeletons being a pain to draw.. It's why I avoid it like the plague ^_^ That's several entries for "World's *blankiest* Death"... Including cute and scary :D Hey, at least if anyone says "She looks like a skeleton", you've got a good case