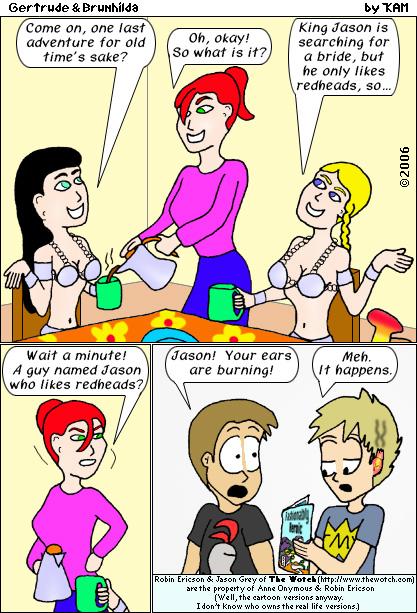 Admittedly that's because I'm a writer first & a cartoonist… 7th or 8th, but it gets really hard to think up stuff to draw with talking head dialogue. Still sometimes I do like what I come up with, even if it has nothing to do with the joke.

Well if you haven't read the cartoon yet, you should probably do so because this next part may give away some of the joke.

I wasn't consciously thinking of any comic character when I named the King Jason, there was after all a mythological Jason, although I wonder now if my subconscious was planning this joke all along. My subconscious can be pretty sneaky sometimes and this joke seems too pat to be just a coincidence.

I am surprised some people (Hi Hogan!) didn't ask about that name choice.

Because you got cameos planned!! I've learned from the Valkyries affair! :-/

Thanks all. :-) Hogan - why are you scheduling your vacation when I've got cameos planned? ;-) magicalmisfits - looking forward to it.

I like the Wotch and you know I like cross overs. (Trying to find a place for your trunk as we speak.