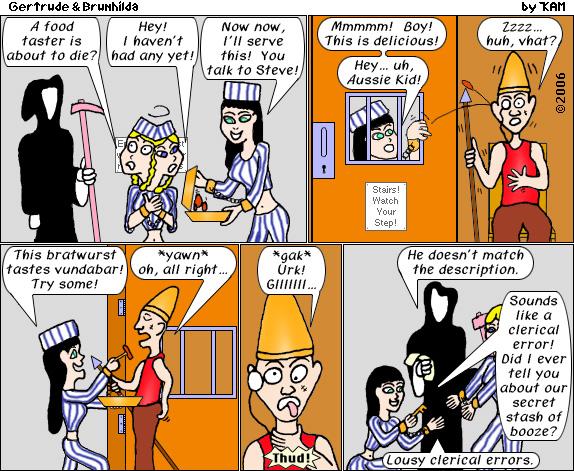 This & the previous cartoon were originally one joke, but as I was working on it I decided that there was just too much going on so I decided to split it into two cartoons.

If anyone was wondering how Gertrude & Brunhilda know Steve, well if you think about it, Valkyries are a specialized form of Grim Reaper (the hot form), and as Joff mentioned on one Life & Death cartoon all Grim Reapers are members of the same club or organization.

I was actually planning to use Steve (& another death from another comic) at the end of the storyline where the girls went their separate ways for a while. Since the castle was under attack I figured a number of grim reapers would have been called in, but it detracted from the story.

Well at least Steve extended a little professional curtasy in light of the booze revelation.

Everybody meets Steve or one of his counterparts at least once ^_^ Nice one Kam. You ever notice how many clerical errors occur in all these strips? Makes you realise why so many superheros come back to life

Not only do they know Steve quite well.. They're also kinda hot... and DANGEROUS! Looks like a perfect match for Steve, no? I mean... Steve likes beer... and generally if one likes cold beer, one like hot girls as well... Anyway... I guess I'm suggesting a lot of sequels to these two strips... ;-)

10 points for artistic escape! :D And the girls DO know Steve well! ;)

I guess that guy just ate himself to death? :) *sorry... can't think of any good jokes right now*