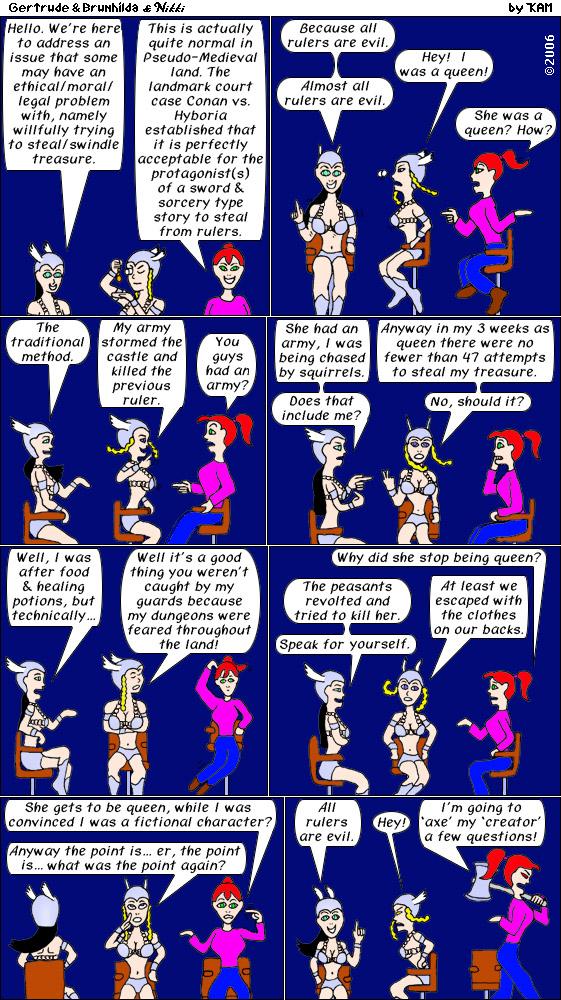 The curse of Friday the 13th kept me from updating.

I thought about the ethical/moral/legal implications shortly after I started this story, & decided I should at least address them.

I was going to draw them standing, but really didn't want to do that, so I decided to have them sitting, then decided they would be in spinning chairs!

Another question I thought about, but decided not to do as a cartoon, Would Nikki have slept with Jason?
Not for the money. However she is single & she did find him attractive (remember the blush), but it wouldn't have happened since Jason was only being a gentleman because he was worried about what might happen if he slept with the demon's intended bride. (He was worried the demon might take away his manhood. Muhahahahahahahahaha! ;-)

One more cartoon then I can tak a break from the girls… for about a week. D'oh!

Thanks all. :-) rmccool - It's rare that I decide not to do some jokes, but yeah, some never will. dracco - I was wondering if someone would ask that. I'll just say the opinions of the characters don't necesarily apply to the opinions of management. ;-)

All rulers are evil? Does it also apply to some non-fictional characters whose names I won't pronounce?

lol...so you also have jokes that will never see the light of day..or the web..like the "Ax" bit

Spinning chairs! Hmmmm Baby would only tangle her cloak!

That lineup and explanation was pure gold! I'm still smiling and probably will for some time when I think of it! :P

All rulers are evil... especially the one I use for straight lines! BWAHAHA!!!