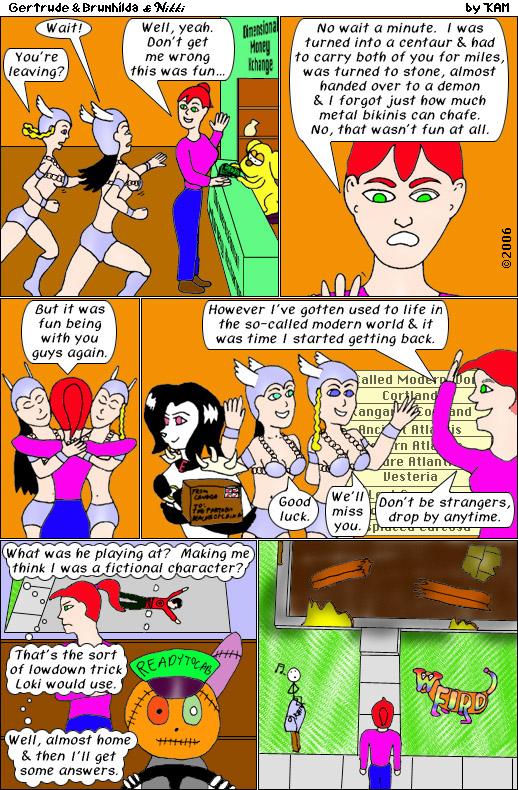 This would have been late yesterday, but my computer locked up & wiped out several hours of work (including stuff I know I saved). So the rest of this week will be Thursday & Saturday going back to MWF next week. (And I'm uploading Thursday, Saturday & Monday at the same time I upload this!)

This was originally 2 cartoons, but I combined them since the first was weak.

Hellos & Goodbyes, this is why I usually avoid them & jump right to the middle.

Also with this cartoon I pass more than 100 cameos & references in my comic.

In Trunk news it appeared at Magiversity on Friday the 13.

Thanks all. :-) rmccool - I think the rabbit saw the W of Washington & thought it was Wisconsin. Joff - It was always intended to be a temporary team up, although temporary was a lot longer than I thought it would be. And they will be teaming up in the future, so it's not a permanent goodbye. dracco - The Weird first appeared in KAM 8, if you want to find out more about it.

Poor Valkyires Three.. Splitting up after an adventure :( Otherwise, nice going Kam, though I doubt Hogan agrees with me

i'm lacking in both grammer and spelling...

lol...so on the way to distroy Wisconsin our boy took a cab drive...who knew...100 that cool

A great ending for a great storyline... I'll take my hat off for you KAM, this trip with the Valkyries Rhree really rocked! :D Now... come here so I can kill you in a 100 different ways!