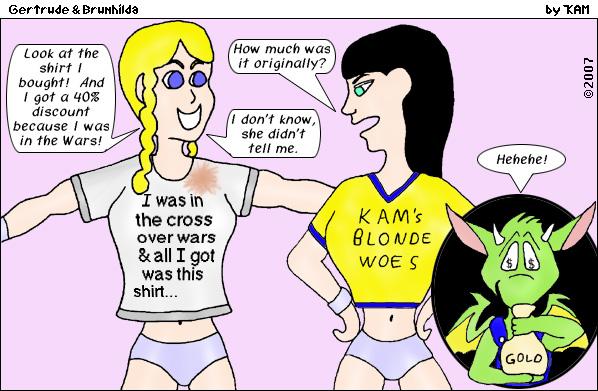 You may have noticed that this isn't part of the S.M.O.G. storyline. No, it hasn't ended it's just that I realized I was jumping over stuff that really shouldn't be jumped over.

I think I mentioned that one problem with this storyline is that it's a comic book idea told in webcomic form & that's where the problem lies.

A webcomic page has to stand on it's own with a beginning, middle & end, usually with a cliffhanger or punchline. A comic book page on the other hand is part of a whole book so it doesn't need to stand alone.

However in making sure the pages stand alone I end up leaving out some stuff that helps tell the story.

So I'm going to do some more work on the script so it flows a little smoother than it had been.

Man, add t-shirts to the girls' outfits & suddenly they look like they're in their underwear.

This cartoon follows a cartoon from Public Humiliation

Thanks Kira! :-) Glad you liked the cartoons & the tribute.

Thanks for the comments/ratings on my pages. =) LOL, my title got featured on a T-shirt! XD I was going to comment on the next page, but then I though I'd go back (for some reason) and lo & behold there was this! So I'll leave this comment here. The second part to this is quite funny, wouldn't have expected that if I had read this first. =D

And Brunhilda got Kerr's Whip ;)

"A webcomic page has to stand on it's own with a beginning, middle & end, usually with a cliffhanger or punchline." Blasphemy, I say! ^_--

I see that Summer is finally cashing in....