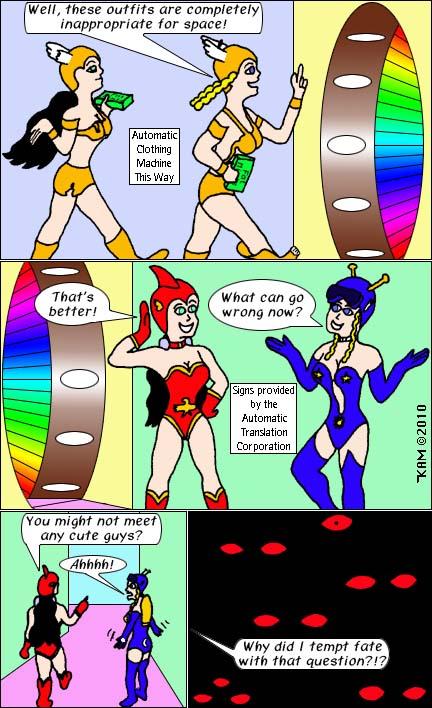 Apparently someone set that machine on Fanservice. Tsk, tsk, tsk! We have standards here at The KAMics! Okay, we don't actually use them, but we have them. They're still safely wrapped in the plastic bag they came in. Mint condition! ;-)

When I designed those things I was thinking Buck Rogers, but drawing this comic I realized they owe an awful lot to Dave Cockrum's costume designs for the Legion of Super-Heroes.

While it appears that the girls are exposing a lot of skin that's because part of the outfits are made of a transparent fabric. You can find out more about Brunhilda's outfit here & Gertrude's here.

This is part of the 2010 Halloween Cameo Caper.

I'm taking a low-key approach this year so I probably won't have another page until near Halloween that way I won't get thoroughly frustrated trying to match other people cameoing the girls with what I'm doing with the girls like has happened before.

Meanwhile, at the Hall of Lustness...

I "blame" jim for the settings on the machine, he designed the ship :D *hands Jim a fiver under the table*