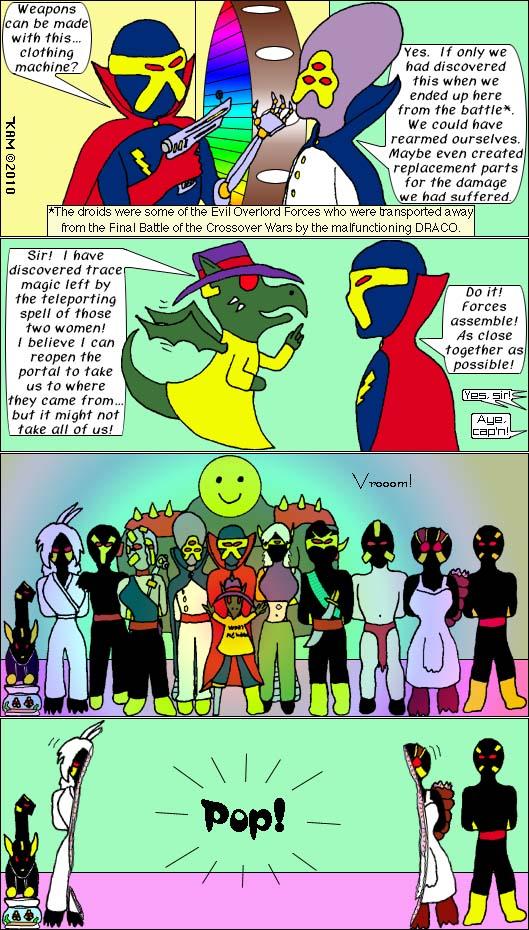 Sorry it's late. I was working on it Sunday when I realized that this thing had so much to color I wouldn't have it ready for Monday & I just didn't have enough time to work up a filler.

I went to so much trouble picking colors for that third panel… then I went & used an effect that altered the colors. *sound of head hitting desk* So for those who want to see the colors as I picked them I'll be uploading the unobscured panel at KAMics Kast after I upload this one.

Additionally I will be uploading bio pages for some of the droids starting tomorrow at KAMics Kast.

I'm not sure if this is part of the 2010 Halloween Cameo Caper or not. The next one certainly isn't, but I don't know about this one.

And just because I know someone will ask… No, this isn't part of any Crossover Wars 2 storyline.

As planning for this year's Caper was going on I was reminded that Evil Overlord forces had been transported off the battlefield & I thought it might be interesting if it had turned out some of them had ended up on the Nostromummy. I thought up some gags & then realized that since I was having trouble producing comics at the time I wouldn't have time to do them, so I wondered, “What if some of them got off the ship & into The KAMics?”… & the ideas grew…

I'll try for an update Thursday, whether I make it or not…

Glad you all liked it! :-) Mr. Kaos - If someone who understood their systems well enough probably. The big problem would be hooking up the operating computers right. Although since the majority of the computers are on the ship it's not impossible. Tobimaro - They're droids, they don't have pain receptors. (Why would a robot need them?) Amonstar - A prototype intelligence droid.

What type of droid is the one on the right in the first panel?

That looks painful, but they are droids so they should not feel a thing. I hope.

I just wonder if the two halfdroids could become into one new droid?

laughs... just when you thought it was over... next time he says get close they will get real..close...