The Last Hegemon of Abun 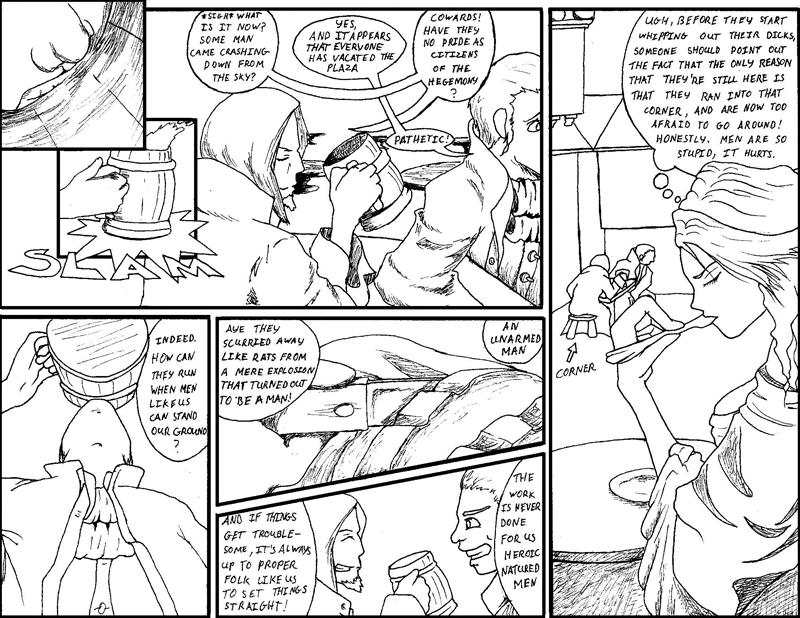 So usually, I try to post on Sundays, but here's the thing. When I started, I had already had these past three pages pretty much done. Summer semester just ended, and I'd procrastinated on alot of assignments, leaving little time to continue procrastinating on this comic. So yeah, there might be a bit of a gap in between now and the next update.

Now to the art. First of all I want to thank you all who have posted comments so far, they've been really positive and helpful, and just plain uplifting. I can see why people get addicted to checking on updates on like their facebook and such.

The art has received a little tweek here, because of two things. First, I was afraid of cross hatching because I was worried about wanting to comeback in the near future and coloring it. Then I realized, why the **** would I want to not just redo the art if I'm gonna go back and make changes. It'll be far into the future, so I like to think I'd have godly drawing powers by then… also either a pony tail, an eye patch, or a prosthetic leg. It's like a rule that your future self has to have one of the three.

Now if I am obscenely late, and you want to reach me immediately to yell at me for being a failure as a webcomic artist; then you can leave your hate spam on my deviantart page. I'll definitely get it then since DA is practically my home page.

That was a huge note, I wonder if anyone actually read it?

lol us men are not known to think things through

Something tells me these two are going to cause a lot of trouble in the future. And I wouldn't worry too much about cross-hatching, unless you think that you might actually go back and color everything any time soon.