The NEW Life Of TimmY 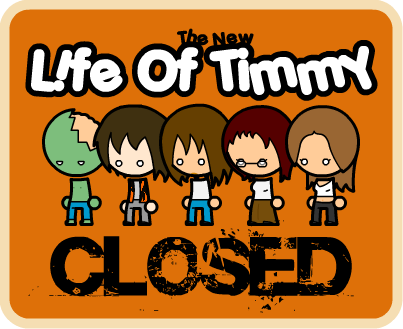 Yup, Life Of TimmY is over.

Why? And where have I been for the last 2 weeks? Both are answered in one. When I started Life Of TimmY it was Timmy, Nubs, Jo, Shelley and Hay. After a while because I'd stopped seeing them so much I wrote Nubs and Shelley out, but in the last few months I'd started hanging out with Shelley more, the next comic was going to bring her back into the comic, but the day I was going to upload it I got a call from Jo. Shelley passed away in the night aged 20. I've spent the last 2 weeks with Jo and Hay visiting family, going to the chapel of rest, and going to the funeral. Because of what's happened I don't think I can carry on the series. Sure I could change the story and carry on without Shelley, but she was there when it started, and she was coming back (a bit of ill humour that she was coming back as a Zombie), so it doesn't seem right to carry on without her around.

After a few good years running off and on, this is goodbye from the Life Of TimmY.

I have this terrible urge to say "It's a dying shame," but I'm not going to. Oops, already did. You can continue the comic. Please tell me you'll continue eventually. Since the very beginning reading LoT has been one of the high points of my day. Why am I giving this a five if it's not even a comic?

@slimredninja : I haven't lost the old friends :-/ only Shelley.

restart one with new friends

That's really sad! What a shame! I'm sorry for your loss (of both Shelley and the comic).

Thanks to everyone for there comments of support :-) although it is sad to have closed Life Of TimmY, it's good to know it'll be missed by people. Why am I posting this now? A few weeks after I first posted this 'closing' message? Well because of two reasons. 1. People are still leaving messages, which shows people are still looking :-) 2. I just checked Life Of TimmY's status page and it hit 30k :-) thanks to everyone for helping me reach my goal for LoT.

This has to be the most depressing ending ever. I probably should've commented sooner but I couldn't think of anything to say that wouldn't sound retarded. Er, still can't actually. Sorry.

I'm very sorry to hear that news. It's awful coping with a death of a close friend. I've never really commented on the comic before, but you did fantastic work on it. Anyway, my respects to Shelley, her friends and her family. *hug*

hey man, none of us can blame you, always keep her in heart though

This is sadder than a metaphor about something really sad. I hope you create another comic that is just as great as this one :).

I'd say continue the story in her memory, but I really can't think of a good way to bring her back without the ill humor. Sorry about your lose.

aw crap...and i just got here, well im gonna look at your acrchive, but awesome comic

Yes, that is sad indead, I hope you guys'll recooperate from this, though... And I guess you could use another digital hug *hugs* ...

i am sorry to hear that.