The Pen is Mightier 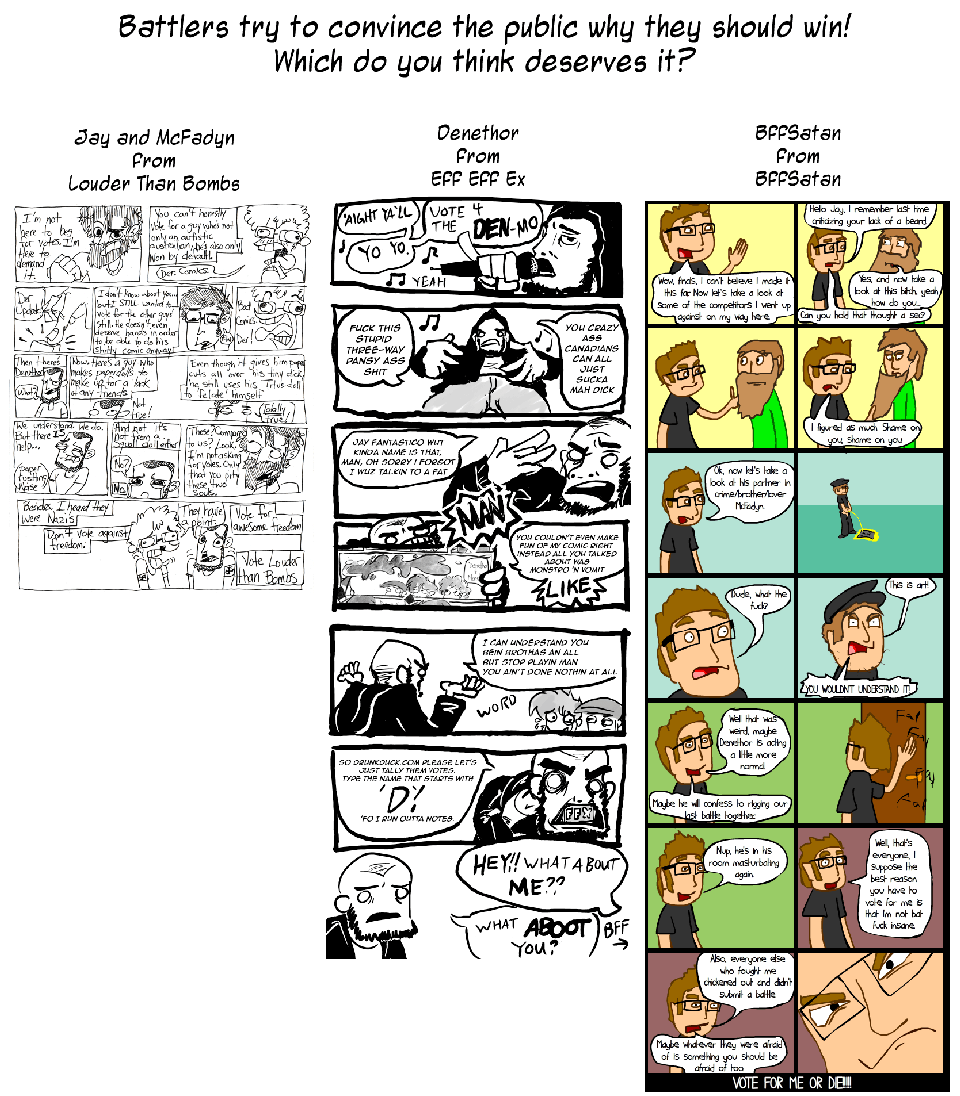 Well, this is the final week for TPiM Series 1. Join us in mid-January for series 2!

Thanks for all the voters and battlers!

'No I made it to prove a point:people do not like to face the truth. Everything in there was truth and if you don't like it, well I'm too "polite" to say FUCK YOU. Some of what I said was harmless jokes but some was not. Don't see why you can't afford not being loved by me.' Okay leet. I guess I have to explain how I'm not mad at what you posted, just that you seemed to just want a rise out of people for no real reason. Other then some attention. When you say the 'truth' you must mean what you view as the truth. Anyways, it's your opinion and you're totally entitled to it. You saying all this stuff in some voting area isn't exactly 'polite' to the others here. Give it a rest and we will too. I don't give a shit if you 'love me' I just don't want your shit all over a voting section.

said that when I was still angry...sorry...to everyone...

leet: For the last time. Take it to the forum. Click [url=http://www.drunkduck.com/community/?comic_id=39153]here[/url].

No I made it to prove a point:people do not like to face the truth. Everything in there was truth and if you don't like it, well I'm too "polite" to say FUCK YOU. Some of what I said was harmless jokes but some was not. Don't see why you can't afford not being loved by me.

Little ironic the comments section is filled with more epic comebacks by the artists then in the comics themselves xP Great stuff you guys, i can't decide between mcfaydn or denethor, but were great.

[i]@ Jay: You weren't angry with me were you? Or you didn't read my comment. Whatever.[/i] 1337? Did you just post that comment to get a rise out of people? If so, just leave. We don't want any stupid shit started. I read every comment because this competition is my responsibility. I take pride in the things I create. Unlike you and your hideous creations you try to pass off as "comics". No one cares. These comments were for who you vote for. Maybe a short blurb on what you thought. That's all. Now look what it's devloved into. I created a forum for this exact reason. Go to the forum if you have a lot to say. Respect everyone else.

I vote for BFF satan if this is still going. It was the only one that I could really understand.

yeah but why would they make it easy for us. ha ha ha ha ha...not funny...

*Go with I wish there was an edit button

Jay and McFadyn were the wittiest and smartest, but Denethor's was the funniest, so I'm going to have to with Denethor.

@Dene Word. @azu It's all good lady, you're still cool.

Jay & McFadyn were the wittiest, but I fuckin' love that rap, so hard... Sorry guys.. Dethenor.

Glad to see I had an effect on you guys. My post was to make a critical yet mean veiw of each comic. If you guys don't like me giving you the honest truth then don't make comics for me to see. Yeah looks like Denethor will win for his going all black on us. And as to the length thing, I bet you all read it and just saw that I was the biggest ass here but I don't care. At least it's no longer quiet in here, :P. @ McFadyn: Well sor-ry! No, I know my comics kinda suck at the time but there's no way they are the worse because trust me I have seen at least 2000 comics on this sit and most of them get even worse. And I will show you that I can do better. I will SHOW YOU ALL. Laughs evilly, flips off McFadyn, then runs ou the door missing the crucial pair of pants he left at your mom's last night. Oh and hell yeah I invented humor! To give you a positive note becasue you had to bitch about the negatives, I did like the look of it, less inky than usual. Done in pen (:P)? @ Jay: You weren't angry with me were you? Or you didn't read my comment. Whatever. ...did you read all that? If you did put a 1 in front of your next response or tell me to go f*ckin die. Whichever floats your boat...unless your boat sinks.

I vote for Denethor. :D

I vote for Jay and McFadyn, because I believe in freedom.

I'm the classiest guy I know! (and the only guy I know)

Looks like Dene is going to choose to be a bit more classier than I am. Sorry I'm such a 'hick' leet.

Does that mean you're in the lead right now Denethor? x: -cheerlead!-

oh and l337, just vote next time. no one wants to read that.