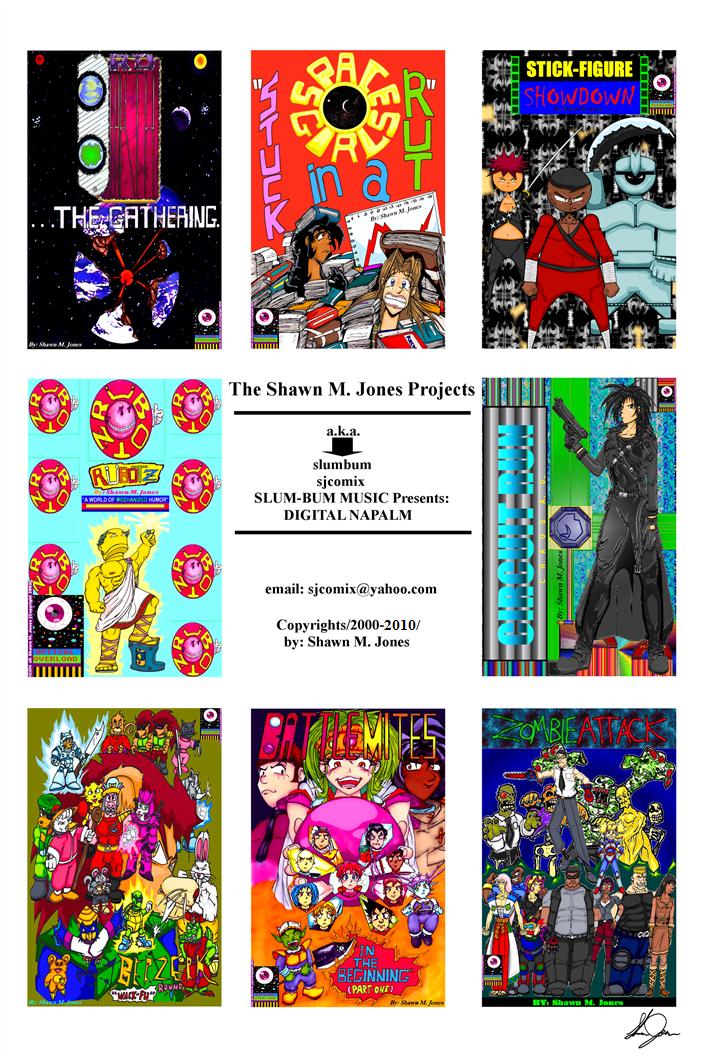 Is a futuristic Sci-fi epic about the depletion of natural resources, population growth, the renewal and survival of mankind.


SPACE GIRLS
Diane Summers â€¦witty and ambitious, Amy Rose…giddy and funny, are best friends who work for the same advertising corporation, they earn a lousy-pay and their repetitious duties are becoming boring. Wanting to make a career change, Diane an Amy are inspired by a newspaper want-ad for Space-Freighter pilots/operators, they apply, go through vigorous and at many time humorous training. Amy and Diane become Space-Freighter pilots/operators; they soon find out, theyâ€™ve got themselves into more then what theyâ€™d bargained forâ€¦dealing with a cheapskate boss, space pirates and pay cutsâ€¦due to lost shipments and late deliveries.


STICK-FIGURE SHOWDOWN
This is the comic for thatâ€™ mature audience, whom likes odd cartoons, action-packed Martial Arts and bloody-fights movies; â€”with this in mind, Stick-Figure Showdown was created!" Well…basically, when I draw the pages for this comic, I donâ€™t use any penciling to create the drawings, â€¦only pens, markers, templates and a ruler are used; the pages Iâ€™ve sent you, were created in this manner. I know it might sound strange, but I seem to be moving quite fluently in creating this comic, â€œmaybe itâ€™s the freestyle drawing..!â€


CIRCUIT RUN
The advancement of technology and the dangers of its abuse.


BERZERK
Ever wondered what a somewhat mixture of, POKÃ©MON, DIGIMON, DRAGONBALL Z with lots of comical humor and Martial Arts? Thatâ€™s what BERZERK is all about!


BATLLEMITES: (Saga-1, issue-1 cover).
Brats with magical powers cause chaos, takesover the world and the kids, who have to restore order to it.


ZOMBIE ATTACK
This is a dark comedy with lots of humor, plenty of gore and the coming togethernessâ€™ of (all walks of life), to simply survive a (crazed-zombie-horde onslaught).


I will upload comic/manga pages ever week!