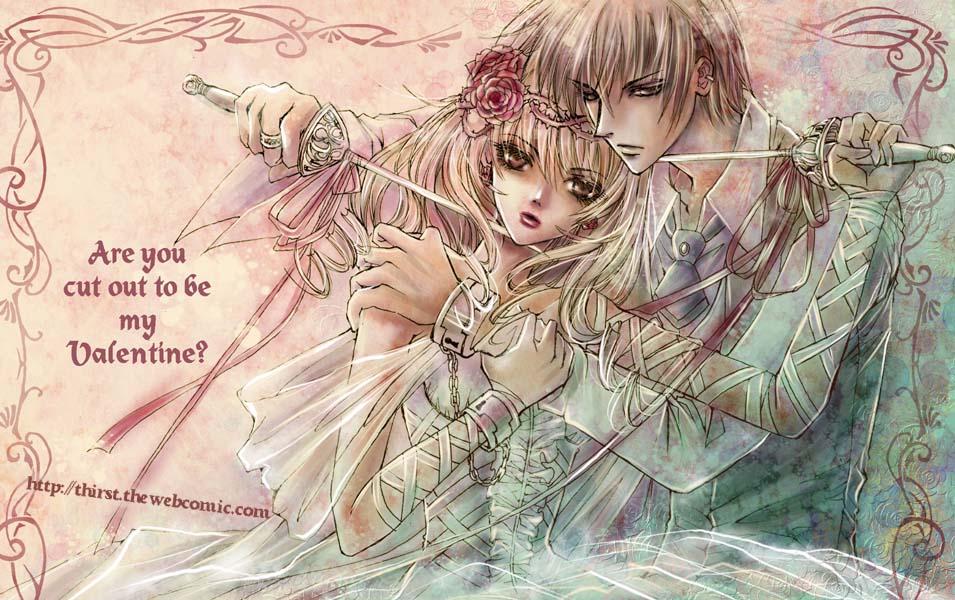 Every Day Is Valentine's

Yikes, Valentine's Day was a long time ago. Updates are kinda stalled while ANZU is busy with other projects. We'll do our best to get going again as soon as possible. Thanks for sticking around.
.
.
.
.
June '08 Update: If you want to see something cool while you're waiting, check out ANZU's new manga The Reformed. The style is way more shonen than you've seen here, and it stars a couple of bishies. It's in bookstores too for your tachiyomi pleasure.

*sigh* It really is lovely. I wonder what mysteries will fill this story of dark romance and lovely death life.

i'm asking this abit early but, who is that guy? he doesn't look like Micheal Romanus.

that picture is really beautiful, i love it! :)

wow this is awesome

bellagail - Yeah, if things had gone according to plan, this would have been finished just before vampires came back in style again. Now it's doomed to seem like a copycat.

*mutters* y does this pic remind me of tilight everytime i look at it? Well, ppl r still commenting 9 months after ^_^

ahhhhhhhhhh.... I just found this beautiful comic and it hasn't updated in a AGES :( please update!! :)

I cant wait to learn more about the different characters and the story line I hope you are able to update soon. This picture si so pretty They look like they love each other but at the same time hmm cant bring to words what all comes to mind but this is very good.

I love this pic... When will you start updating again?

That picture is done very well.

youve been gone for awhile D: i love your art and would like to see more, and the story line is pretty much wsome so far!

much love to this BEAUTIFULLY drawn comic....i would love to know what happens next^^

I love the art and want to know what is going to happen in the story. Keep up the good work.

beautiful art!! the mystery really draws you in as well :)

Beautiful artwork! Will have to read it now.

An absolutely gorgeaous comic! I was hooked from the very first image! You use of color is original and so enthralling, wonderful!