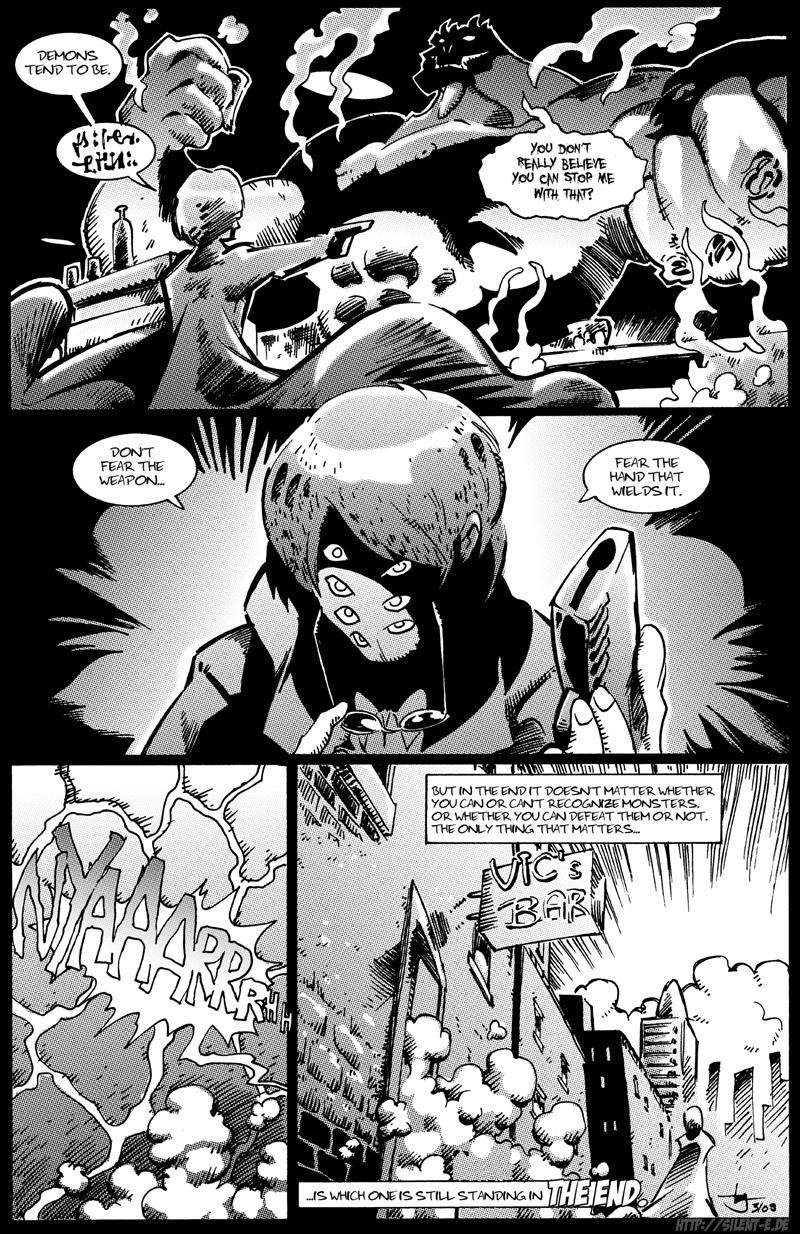 And so the demon is revealed!

This is the last of three pages of a short story I wrote and drew in February for the fourth volume of German indie comics anthology JAZAM!. It's being released these days, so I can finally share these pages with you.

Oh, and that's not a font - that's me improvising some sort of mythological language :D

I hope this 3-pager was a nice little appetizer for what's to come!

Jabali: Thank you very much! *takes a bow*

JNP: I'm afraid she's too cheap to afford more sets of glasses :D And I'm not quite sure which “sisters” you're referring to @__@

patoborracho: Yes!! :3 I'll delve into that further down the road.

JNP: I think I'm starting to get it… you're making me feel very slow! :3 Well, to answer your question, their exact relationships are hard to determine. Say, they were materialized from the same idea… or they express the same idea… they're like they're the same word… something like that.

mind_reader: Thanks a lot for the offer! I was a bit too optimistic in thinking I could work on four comics at once… so for the time being, three it is.

Say...abt, when is this going to make it's return? I am really looking forward to this. If you're struggling for art, I am here and sort of wanting to try my hand at working at other people's scripts (not just ironhands for reality)...so if you'd like...I could do another short like this one...because I need to see the update...this thing is amazing, you s4e!

I'm referring to the sisters you mentioned from 2 pages back [quote]JNP: Oh, if you knew! Countless sisters, one prettier than the next! It's true! But you don't really wanna get to know them... *cough cough* uh... can't give anything away...[/quote] =p

Oh! miss detective was a monster!!

I can't wait to see more! I wonder if she has more pairs of glasses XD Oh and... um... how close are the sisters "related"? Bah screw it, hook me up anyway. At least they can kick butt... or devour me after procreation o_O

A very unexpected twist! Very good stuff there! Though it was only three pages, it could have been a 12 page story...well done...this is fantastic stuff. Definitely one of my fav comics here.

yes, my palatte is definitely whet!