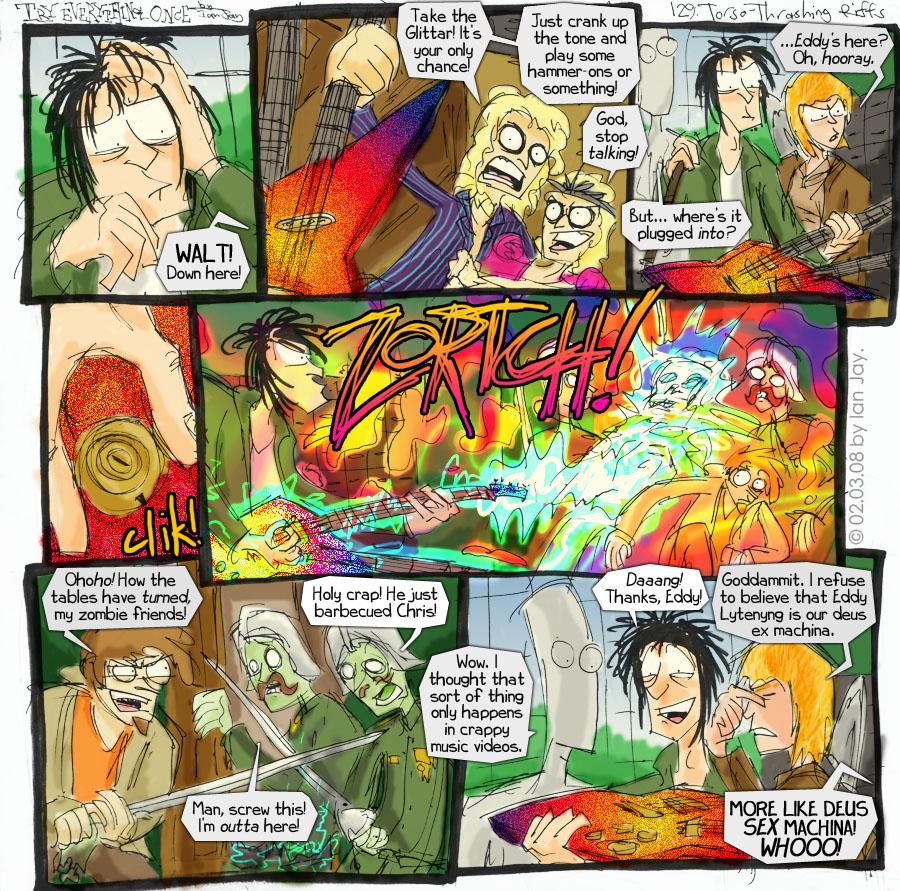 Hey, guys! Sorry it's been so long– I've been crazy busy. This page was fun to color, though– I really love doing the Glittar effects, despite the extra effort involved. …Oh, you didn't know the Glittar could shoot bolts of pure rock energy from its guitar neck? Well, now you do. The Glittar is that glorious. And you know what else is glorious?

In the dark days following the ignominous birth of the third millenium, the planet Earth was swathed in a gloomy, wraithlike shroud of decay. Violence, greed, and ignorance prevailed throughout the land, while values such as truth and beauty lay withered and dying from sheer neglect. As people all across the globe sunk further and further into numb oblivion, there seemed to be no hope anywhere, no inspiration to be found.

That is, until one day.

One day in February of 2008, when, charging forth upon the barren, grassy pampas of the Internet, came nine extraordinary men. Nine webcomic artists turned pioneers. Nine champions for a dying species. These fine gentlemen, these mighty colossi of their age, would be known and revered for innumerable eons hence as…

Yes, the Scienteers webcomic collective is up! Comprised of nine comic artists, every single one of whom have insanely awesome skills (and I'm not just saying that– they do, trust me), the Scienteers collective hopes to set a new example for the future of webcomics. They've also got comics news, heaps of promotion and advertising opportunities coming up, and (coming soon) an original webcomic series co-written by the collective members. And did I mention that yours truly is one of them??? Well, I am. Check out the site today– I guarantee it will rock your ass out of the top of your head and back into your seat. (Also, if you have any news you'd like to announce, email us at thescienteers@gmail.com.

In conclusion… The Polyphonic Spree's cover of Nirvana's “Lithium”, as sung by sock puppets. If that doesn't win you over right there, I don't know what will.

Oh god, I wonder what sex will be like with them.

Hey nice to see this comic is still going strong. Also congrats on being a Scienteer! Hope you guys get some good comics better known.

Wait, what happened to the glittar's strap?

The power of pure rock. Awesome.