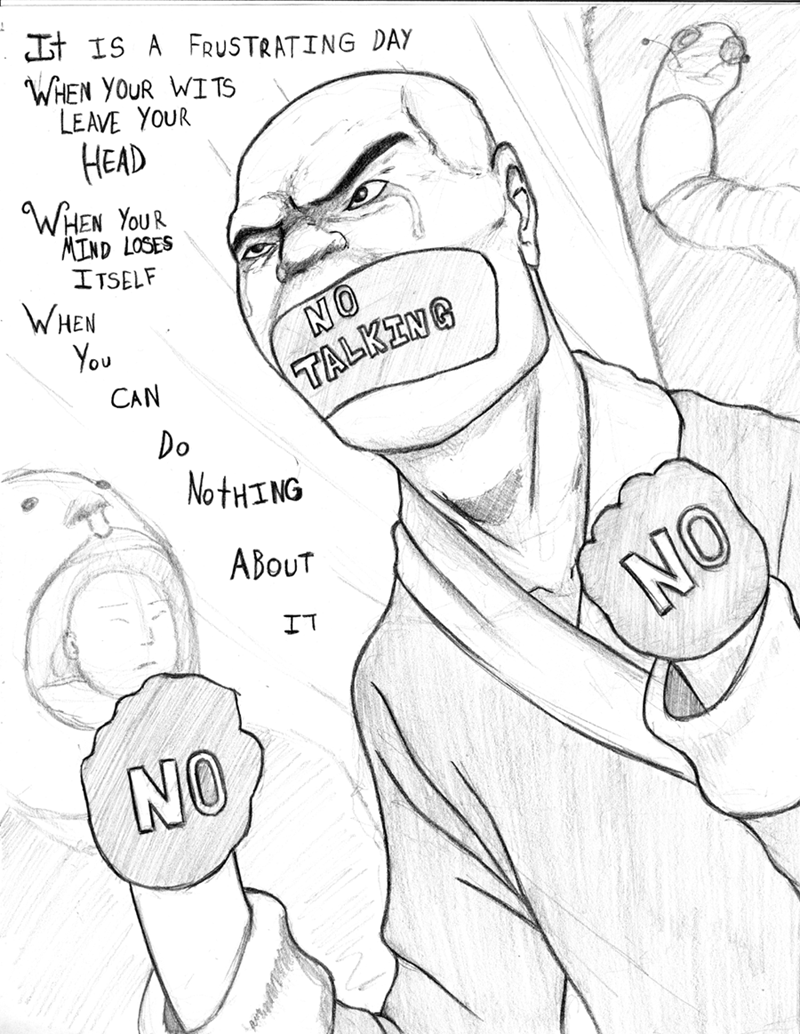 I've been thinking about a lot of things in the past few days, and I've come to a few realizations and make some decisions.

I'm sure most of you noticed, but the quality of Unhappy Star started to slowly decline over the last half of the pages (not that there are that many). It was incredibly fun for me in the beginning and every hour I put into it made me happy, but that started to go away the longer I did it. I thought long and hard about why that would happen, since it was so fun in the beginning.

The second part was the imposing of a structure on myself. I did a good amount of research both online and with print books on comic book technique/etc. that I said to myself “This is how it's done, so that's how I should do it.”

So that's how I did it! And it was great for learning, but after a while it didn't even feel like me anymore, if that makes sense.

So I decided this:

“Dammit, shit-assballs!” I was a little irritated.

That was my first decision. I thought about that some, and realized that what I really wanted to decide was this:

I'm going to do a comic that is based entirely on what I feel it should be, and I'm not going to try and make it funny every single issue. That's really really really hard, to be honest. Also, the structure, technique, and feel of said comic would be subject to change at any moment, like House of Leaves or the Principia Discordia.

Once I had decided that, ideas started to spring up in my head left and right and I immediately started drawing. I knew that this is how I had to do it if I wanted to keep having fun while drawing comics.


I only have one question, since it's more of a question on Drunk Duck etiquette than on the comic:

Do you guys think I should make a new comic to post these under, or keep them under Unhappy Star?


Note
—-
If this page doesn't make sense, it will in the next few pages.


Update
——
The new comic will be right here: http://www.drunkduck.com/The_Id/

Alright, I'll add this to the news post, as well. The new comic will be right here: http://www.drunkduck.com/The_Id/

I think that I'm going to seperate them, because it's not TOO drastic, but still different enough in form and function that it would be easier just to keep them apart. In fact, I'll do that right now.

I'm glad you've decided to just do what makes you happy and screw everyone else's expectations. If you're having fun making it, I'll probably have fun reading it. The important thing is that it makes [i]you[/i] happy, because otherwise you'll just end up hating it and abandoning it altogether anyway. Then it won't matter if anyone liked it. As for starting a new one or continuing with the changes in the old one, I don't think it matters that much here. Since it's so easy to point to a new one, there's no drawback I can see to either method. If it's a really [i]drastic[/i] departure, perhaps it would be better to separate them. Phew, this was kinda longwinded. :D

That's how it was in the beginning, but later on it was more like "What the hell do I do now? No, that wouldn't make sense. No, that won't work either. I'm sick of drawing this guy and these beards, but the plot revolves around both."

Really? You were putting effort into these? I thought that you did just think of an idea and then draw it! Just to let you know, the last comic where he's cursing and yelling about shoes... That was my desktop background for like, a month