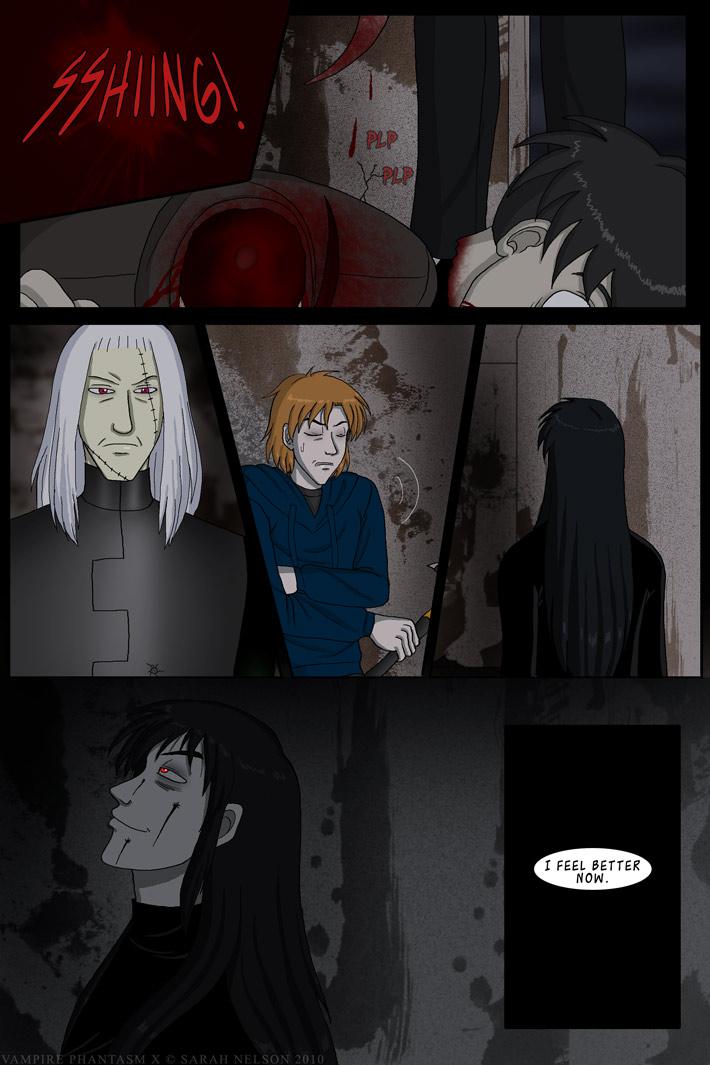 Aaand close with this song. XD

That's it…..HAHAHA. Hoyy, I'm actually terrified about how everyone's going to react to this. Please don't kill me.

A big message page will be posted here soon (with a ‘The End’ page at the same time), explaining what's happening next. Though I can say YES, THE MAIN VP STORY WILL BE CONTINUED NOW THAT VPX IS DONE. However, there will be an intermission before I get the main VP story going again.

This is how I planned to end it for a while now so I stuck with it. With Jack, having slaughtered all of those vampires, simply stating he feels better. If everyone finds it stupid…ah well, real sorry. Maybe it doesn't work as well in comic form as it does in my mind.
Don't get too pissed as it was only a backstory comic, and a rather experimental one.

The gist of it: Jack was driven insane and will continue to do Orlock's bidding, and Topaz, despite everything, decided to stay with Jack.

i don't really see how topaz is insane. all he did was hack up someone who intended to kill him and his unhinged mate. jack something of the proverbial pot, in any case.

Yaay! Congrats on finishing the Prequel! I can't wait to see you get back to VP! :D

I think that ending works really well, actually...melodrama doesn't really seem to be Jack's thing. This ending is scary and kinda unsettling; like Jack has finally gone irrevocably insane and the person he was before is definitely long gone. It's a pretty great ending of a beginning... Please, ma'am, may we have some more? XD

All he needed was some stress relief.

wow! I can'nt believe it's over, and I read it eagerly VP. The last thought of Jack is'nt at all stupid, I understand what he must have felt. You're very talented, Sarah. Keep it!

wow! I can'nt believe it's over, and I read it eagerly VP. The last thought of Jack is'nt at all stupid, I understand what he must have felt. You're very talented, Sarah. Keep it!

This is a very well written and fitting "end" for a prequel. It's neiter stupid nor am I pissed, I'm in fact very pleased

if i could rate this any higher i would!!