WELCOME TO THE WORLD OF STATIC SHOCK 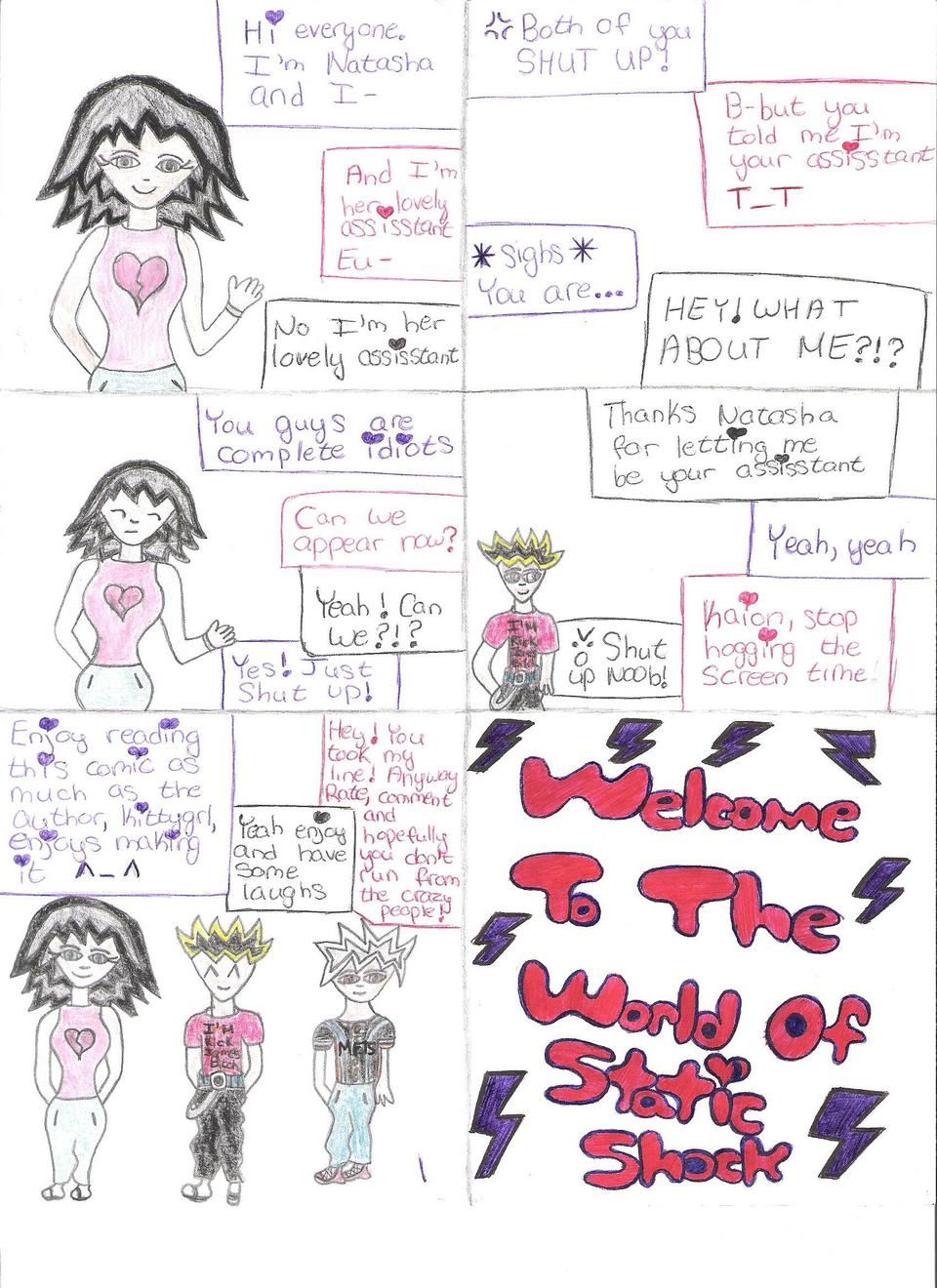 Hello all… o-o ZOMG IT'S FINALLY HERE!!! MY COMIC THAT I'M DRAWING!!!! WOOT WOOT!!! LET'S ALL HAVE A PARTAH!!!!! *confetti comes through ceiling and alcohol appears, random music plays* Ok enough of that… Moving on… Well this took a really long time so thanks you all for putting up with me ^^ lol. Anywayz critism is allowed (but not mean critism! Nice ones!) Like any advice on to how to improve my drawing skills would be apprecitated so very much! And hope you enjoy it!

{This comic is also based off of the show Static Shock}

kitty can you plz fill this sheet in for my new comic name: age(genin 12-13 chunin 14-16 jonin 18-30): hair color: eye colour: hair style: clan( if has one): jutsu type( fire style, water style etc if has one if dosen't but like base type of justs): animal based justu( if has one such as dragon flame, snake bomb, tiger claw, mud style snake bomb): summoinig(if has one: weapon( if has one like a katana or axw shaped kunai's): rank( chunin genin axcademy): status( rougue ninja, village shroudded in light( main village) ): personallity: Main jutsu(sahdow clone etc): best justu(shadow colone etc): Stringest justu:(resansengan): acresories: place of head band: figure( abs and crap like that or big): plz fill this in i put it up on my comic but nobody filled it in so plz fill it in

@Nighthawk: No worries... it's cool ^_^ I still love you @Everyone: Guys bear with me! I have ACT's this weekend and I have finals/regents coming up so I can't really work on the 2nd page! Sorry guys... just bear with me!

[color=red] @Howey: Well like I said before.. Later in the future I'm gonna do like a random comic with you guys in it but see I already have a story line going on.... but don't worry I'll figure something out! Promise! @B_D: I KNOW! THAT SHOW WAS THE SHITNITZ!!! Thanks again! Daisy!... Also working on next page so please be patient with me! ^-^ Thanks! [/color]

[color=purple]OMFG!!!!! This looks so KICK ASS! Man, Static Shock was the shit when it came on. OooooooooI'msoexcited2seethenextpage! Oh yeah, I fave now.[/color]

can i be in it to PLZ

@Howey: No but I decided to ask him be in it and he said sure! @Nighthawk: Cj's the one who's complaining saying "Hogging screen time" Kaion's the one saying "Shut up noob!" but yea... as you read the authors note it sys Kaion's black, Cj's red and natasha's purple!

I don't see why Euron is complaining about stolen lines. Since he stole mine. (what he said in this page is a line in one of my comics("Shut up noob!))

GASP! To much posting! Go directly to jail, do not pass go, do not collect 200$...hmmm dejavu?

@Howey: Ok it's basically about this kid named Virgil Hawkins and he has a best friend named Richie Folly. They both wound up getting superpowers from this gas, Virgil gets electric abilities and Richie gets super intelligence. Virgil names himself, Static Shock while Foley is Gear. They called these kids who have these superpowers Bang Babies or Meta-Humans. It was like THE BEST SHOW EVA!!! Well... when I was little XD Oh I forgot to answer your other que. Well Before I made this into a story but decided to make my story into a comic! So yea. It's basically just Kaion and Euron and other people from my school. BUT! I might make a comic that's just like random stuff that has you all in them. But first I wanna see how this turns out before I start doing another. @Godblaster: Thanks so much!

no worry's aalso faved .... hwait was statict shock that old cartoony show that had a super hero like guy that had the power of elcticity?

@Howey: Awww Howey! Thanks! Yea mom and bro dragged me Upstate on that weekend and like we didn't have any internet access.... I was stuck without a computer for 3 whole days! I was being tortured! @Pooni: I know! I luv SS too! @Nighthawk99: Don't worry! I won't let Gir steal your mouse now!

SWEET AND YAY KITT'Y BACK KITTY THIS LOOKS MAD AND I'VE NEVER SEEN THE STACRTIC SHOW BEFORE SO THIS IS GOING TO BE MAD AND ARE WE ALL GOING TO BE IN THIS COMUIC OR KUST YOU AND EURON AND KAION........ also on animania it was pretty boring when you weren't there....... but the pages were off the hook

SWEET AND YAY KITT'Y BACK KITTY THIS LOOKS MAD AND I'VE NEVER SEEN THE STACRTIC SHOW BEFORE SO THIS IS GOING TO BE MAD AND ARE WE ALL GOING TO BE IN THIS COMUIC OR KUST YOU AND EURON AND KAION........ also on animania it was pretty boring when you weren't there

lol. I loved the original Static shock. and this page was pretty random. Five and fave anyways. :D