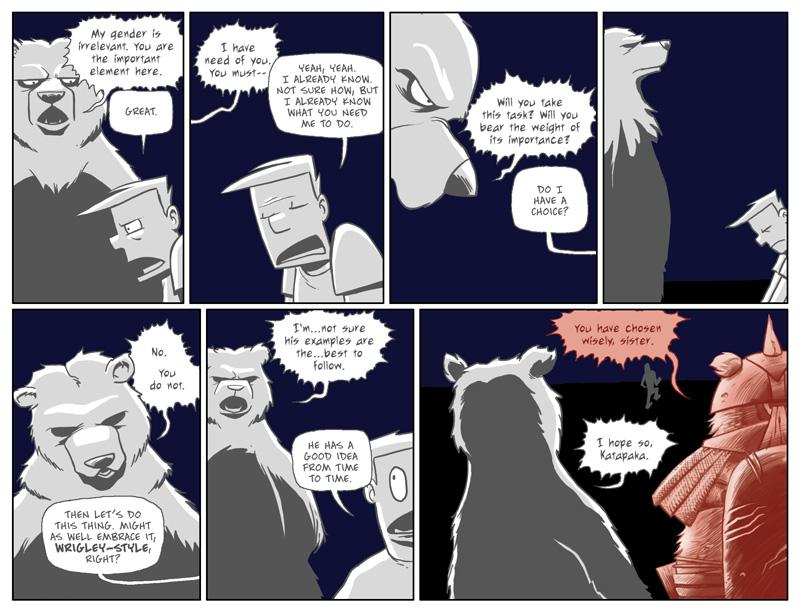 Phew. Finally back. I'm working off my old PowerBook G4 right now as MacBeth awaits his Hard Drive Transplant. It took a while to get everything configured and it's slower than MacBeth, but it will do for now.

This is the missing comic from a couple weeks ago, rounding out that week. I'm hoping to get all three of this week's intended strips posted this week so that I'll get back on schedule. It all depends on when MacBeth gets his new part.

The story gets back to the funny very shortly, so bear with me.

It's good to be back!

I was thinking to myself the other day: "You know what WAIU needs? MORE GHOST BEARS!" You didn't tell me you could read minds, man. I'm sorry I had those thoughts about your sister, but dude...she's HOT.

wb. the cheese is now warm

katyas - i get b's point though (not that i don't get yours, too). i mean, ultimately, the point of this is to get as many readers as possible, exploit us all, and then sell out (just kidding). but i'm serious about the "getting as many readers as possible" thing. and i came in on this strip and then looked and saw that this strip had been running for 3 years and had 2000 pages of archives to go through...i'd probably just pass (not get angry or anything...but i do like to pretend that i have other things to do than sit in front of my computer and read comics...like...y'know...stuff...). anyway, b, i'm not discouraging the funny, as you and i share much the same sense of humor. i'm just also trying to prevent you from beating yourself up for not having a joke every strip/discouraging yourself for running said strips without jokes. both are necessary, and so far this comic has been a nice marriage of both. unlike my third wife.

I agree with many of the commenters that the plot is important and there is no need to sacrifice it for laughs. When people stumble upon a new strip and are upset that it isn't "funny" it kind of ... irritates me. Yeah, maybe it isn't funny - maybe you don't know what is going on. Well - go read the archives! Usually it is worth it and usually you can tell by the quality of the strip you initially came across - art quality, etc., you know what I mean? I ran across something like this on another web comic I frequent - a certain page had come up that was integral to the plot, but not funny - and THAT was the page a critic decided to lash out at. Unfair to say the least, right? *shrug*

Oops...missed kokuorei - I'm glad, too. The current setup is kind of a stop-gap until I get MacBeth all fixed up, but I'm doing the best I can! b

bullsonparade - YEAH. This plot's gonna be TAR by the time I get through with it. justamusician - I try to maintain a certain level of balance. While the plot is important, the online delivery method demands that there be some humor for casual or first-time readers. Someone reading this strip, for example, would likely be unamused and confused. dudewheresmytard - Hills! JCsGF - Wow. Smoan. seventy2 - That's pretty much how I roll in general, so I think I can apply it to the comic process pretty easily. RichK - I'm a total Shakespeare nerd, so it seemed like the right thing to do! JCsGF (again) - Yep! For those not in the know, Katapaka is a play on JCsGF's real name and she's super psyched about it. b

Glad your back B! MacBeth...funny!

"Bear with me" Get it? Bear? Nidanume? (snorting laughter)

I agree with Justamusician. Plot is very important for anything to be a major sucess. Glad everything is working out again!

i think i just found the vein the needles have been looking for. awesome strip. i'm really excited to see where this story goes. and don't feel like you need to be funny in every strip...it's not like we're reading this for entertainment. but seriously, i like the plot exposition as much as i like the one-liners and bad puns.