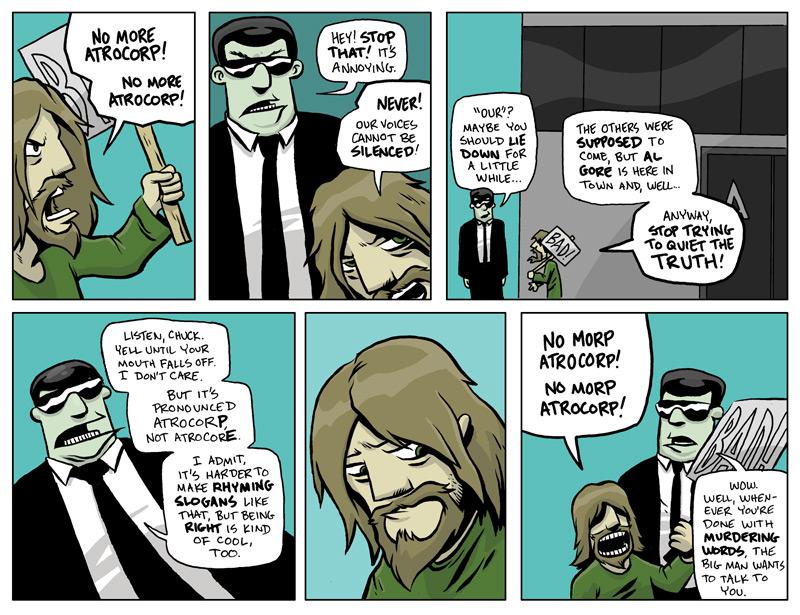 Meanwhile A Few Years Ago Part One

Okay, here's the scoop. MacBeth is still at the doctor. It seems to be touch-and-go, but I'm hoping he'll be okay and home by later this week. In the meantime, here's a little side-story that took place a few years before Chapter One.

For the uninitiated, this is what my art looks like when I use a brush instead of a tablet. I skimped on the backgrounds for time reasons, but I'll try and make up for that as the week goes on. The plan is to have this story run this week, but my mind is spinning and I want to take it further. Maybe this will become the content for a print mini-comic. Or not. If MacBeth doesn't get better, it may take over FOREVER. AND EVER!

ACTUally, JCsGF, it turns out we are BOTH wrong! According to my research, "Corp." - abbreviation for either "Corporal" or "Corporate" - is pronounced "courp" (with the "ou" sounding like in "four"); per: http://dictionary.reference.com/browse/corp. Interestingly enough, corp./Corporate, at its base, means simply a group of people united in a cause of sorts. VERY interesting. Thanks for pointing out my error - I love looking stuff up and learning new things!!

honourableone - PQ me or send me an e-mail (brandon@brandonjcarr.com) about your theory because I want to see how good at this you are! b

I think I know what is going to happen to the hippie, but I'm not gonna say after what happened the other times. Hope Macbeth gets better. Love that name.

seventy2 - That's positive news! n_y_japlander - Thanks! kokuorei - I'm tempted to actually use a sign like that at some random protest sometime. If it's a pro-something rally, I can make one that says "GOOD!" RichK - NICE! Yeah, I'm starting to miss him. PowerBook is chugging along, trying to keep up with me. trevoramueller - I think I'm going to get rantier the longer it takes, so you'll certainly be kept up to date. I'll also be fairly celebratory when he comes home. Either way, being posted will happen! Custard Trout - I always feel vague is the best policy when it comes to taking a stand. Adam Black - YEAH! BRING DOWN THE MAN! b

Good sign, straight to the point and nicely vague, so he can reuse it.

Hey, at least you're still able to update, and that's important! Keep us posted about the computer.