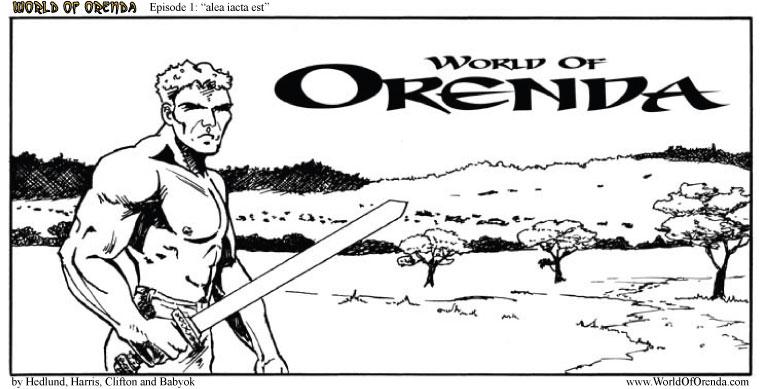 John BoormanÃ¢â‚¬â„¢s Excalibur had a huge impact on me, as did the John Milius Conan the Barbarian. Sure there were other films that I love and still remember fondly, but these two will always stick with me. Just last week my friends and I were quoting lines from Conan.

The music, the mood, the tone, it all reminds me of gaming when I was younger. Gaming wtih dice, not a joystick, that came later. World of Orenda was my attempt to recapture some of memories and to put that into a new world.

World building is a huge task, one that I didnÃ¢â‚¬â„¢t want to face alone. Not to mention that it actually goes against the best part of gaming, which is interactive storytelling. ThatÃ¢â‚¬â„¢s where Jordan and Allan come in. I became fast friends with them and they both seemed to share the same sensibilities that I have when it comes to storytelling.

What better way to test that theory than to build a world together and tell some stories set in that world? IÃ¢â‚¬â„¢m very grateful to have them on board for this project.

The easiest part of putting this project together was picking the artist. Scott Hedlund is an old friend and talented artist who just keeps getting better. I think youÃ¢â‚¬â„¢ll see that as this story unfolds.

ThatÃ¢â‚¬â„¢s it for a first post, thanks for stopping by and taking the time to check out our world.

Hey all, I'm "Hedlund" in the credits there. I do all the artwork for this strip. Hope you like it. Say hi to Rey, the lead character in our story.