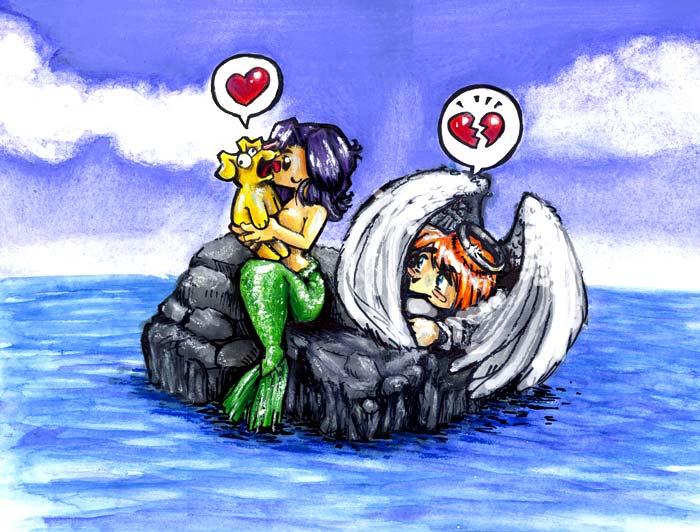 Once an orange angel was assigned to protect a yellow dog. His last chance before being demoted to purgatory, he has to put another life before his own desires for an entire lifetime.

Orange was not the most attentive guardian angel, but Yellow dog was by far the stupidest dog ever fathomed by man or God.
On the first day, Orange was distracted for a mere second, and yellow dog took a long walk off a short pier and fell into the ocean. He was washed out to sea while all Orange could do was watch helpless. After some time it seemed that Yellow dog would drown alone in the ocean, but out of nowhere a mermaid came along.

She scooped up Yellow dog, looking for a safe place to put him as she could not approach the mainland. She found a (very) small rock island and placed Yellow dog there promising to feed and take care of the poor stupid creature.

The mermaid was kind and spent much of her days caring for the Yellow Dog she now loved, but Orange was a different story. Orange loved the mermaid. He hated that Yellow dog got all of her affection and was too dumb to know how lucky he was. It ate at every bit of Orange's soul that the mermaid would never know he existed or of all the hours he spent thinking of only her.

Years went by, and as each one passed the Orange Angel grew more bitter, more angry, and most of jealous of the little Yellow dog. Until one day he could take no more, when the mermaid left he kicked the Yellow Dog into the ocean and smiled as he watched the dog drown. It wasn't until later when the mermaid came back and saw the dog floating in ocean, dead, did he realized what he had done.

She cried harder than she ever had. Her love was gone, and she too gave up living, spending her last few days alone and broken. The Orange Angel was sent to purgatory, forced to feel all the pain he had caused, left with his broken heart for eternity…

Hey what's with the no updates?

puppy love IS a powerful force!

I read this about an hour ago on your Creepy Carly strip, but now I'm reading it again. So with both ratings put together, you've got yourself a spanking 10!!

I read this about an hour ago on your Creepy Carly strip, but now I'm reading it again. So with both ratings put together, you've got yourself a spanking 10!!

I'm going to upload your Herb fan art sometime in the next few weeks because I'm taking a break to study. :D You still wear my shirt :D excellent! I guess the white rabbit thing and Herb being another name for weed probably excites them haha :D

I`ve seen this before :P Nice to see again!