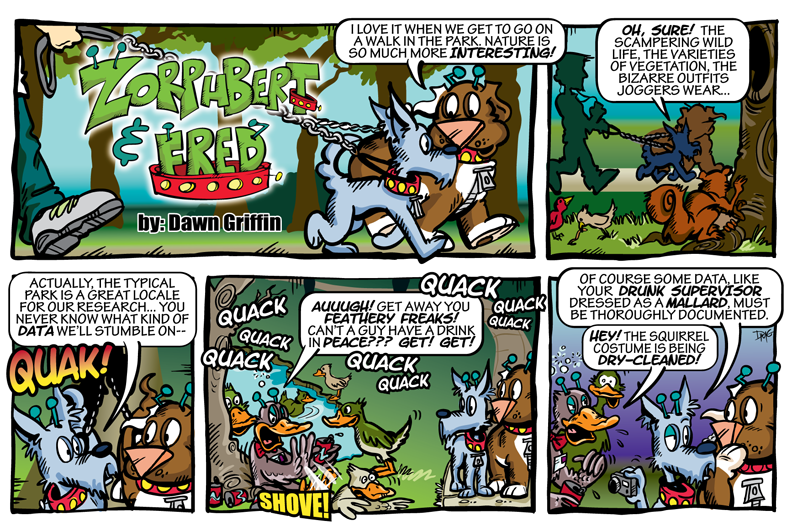 This is it, folks. But only on drunkduck, as I am perfectly available to all of you at my main site. One place, for all of your Z&F goodness! http://www.zfcomics.com

I truly and wholly appreciate all the support here, from all of my readers, fans, admins, the community as a whole. Drunkduck opened my mind to what a webcomic could be, what changes this world- this medium, is going through, and what I have open to me as a cartoonist. And truth is, it's wide open, folks. It opened my world from my little wood paneled room at my parents' house where in High School I would slave away making comics day in and day out, just to share them with my family and with syndicates (who sent such “lovely” rejections letters in response). Regardless if I'm making a living off of my art, I still get to share it with a wide audience, right at my fingertips. I hope drunkduck has had the same effect on all of you as well.

I'll be around, keeping up with your terrific work. I hope you'll come visit me as well!

Ah, no longer here on the duck, huh? Just (slightly) before I was going to try and get back into my own comic... still, its good that you're still doing comics, and it's just a click away to your new site :)

missed ya so much!

Man I have been so behind. I wondered what happened to you. I panicked for a sec there thinking you'd stopped the comic! :O I dunno what happened here but it really seems to be ghost-town-ish here at DD these past few months...

whoa, i gotta check out your new site!

Great strip! I wish you much success with your main site!

You have an excellent collection of work on here and I'm looking forward to keeping up with your strip in the future, too.

I'm pretty sure the canine brah taking a dump in my yard every day is of terrestrial origin.

Thats a great one you should still drop some here from time to time. Just stay a week or two ahead on your other one.

you can start here, if you already have a gmail account! [url]http://www.google.com/reader/[/url]

Thanks to everyone for the well-wishes and good thoughts. Although.. this is not a funeral, people! Seriously, get an RSS reader and start collecting all the terrific webcomics there are out there! I have my DD, and I have my RSS, and therefor a plethora of webcomicy goodness at my fingertips! Trust me, I felt the same way whenever someone else left DD... but my easy to use google reader fixed all of that. Wish I knew about it sooner! If you want some tips or help in figuring out this weird RSS thingamajig, just PQ me, I'd be glad to help!

Its sad to hear that Z&F won't update at The Duck anymore. I already have your main site bookmarked. I wish nothing but the best of luck to you.

Dawn, God bless you, and I hope your pencil and pen always work perfectly for you! All the best!!

Traitor! ;) Why? WHY?!!!! Just kidding! Good luck with your new site :) It's going to be less comfy visiting a different website for my weekly dosis of my favorite webcomics - but hey, that's exactly what I did before I found DD (through a comic that started off on DD and then moved to its own site, no less) So again, best of luck! :) Hope you'll stick around, I've got a little surprise coming up (check ABC for details)

It's kind of sad to see you leave the duck, but I've been looking around too and if you want to really be successful in this game you can't do it here. There's just way to much stuff here. I'm rootin' for you, pal and I'll follow your shenanigans wherever you go!

sad to see you go too. but keep moving forward as we primates say. you never know whats behind you XD

(6_6) I've got mixed feelings Dawn.... I have your site in my favorites on both my home and work computer... but I do not venture off this site too often, the ease of viewing my favorite comics on one site has been pampering to say the least... I can not promise that I will visit your site that often, but Z&F was one of the first comic strips I read on this site... and you, through this comic has taught me a few tricks and lessons on what to do on web comics.... So, I will visit you, Z&F no matter where it is hosted or posted.... Just sad to see you go!