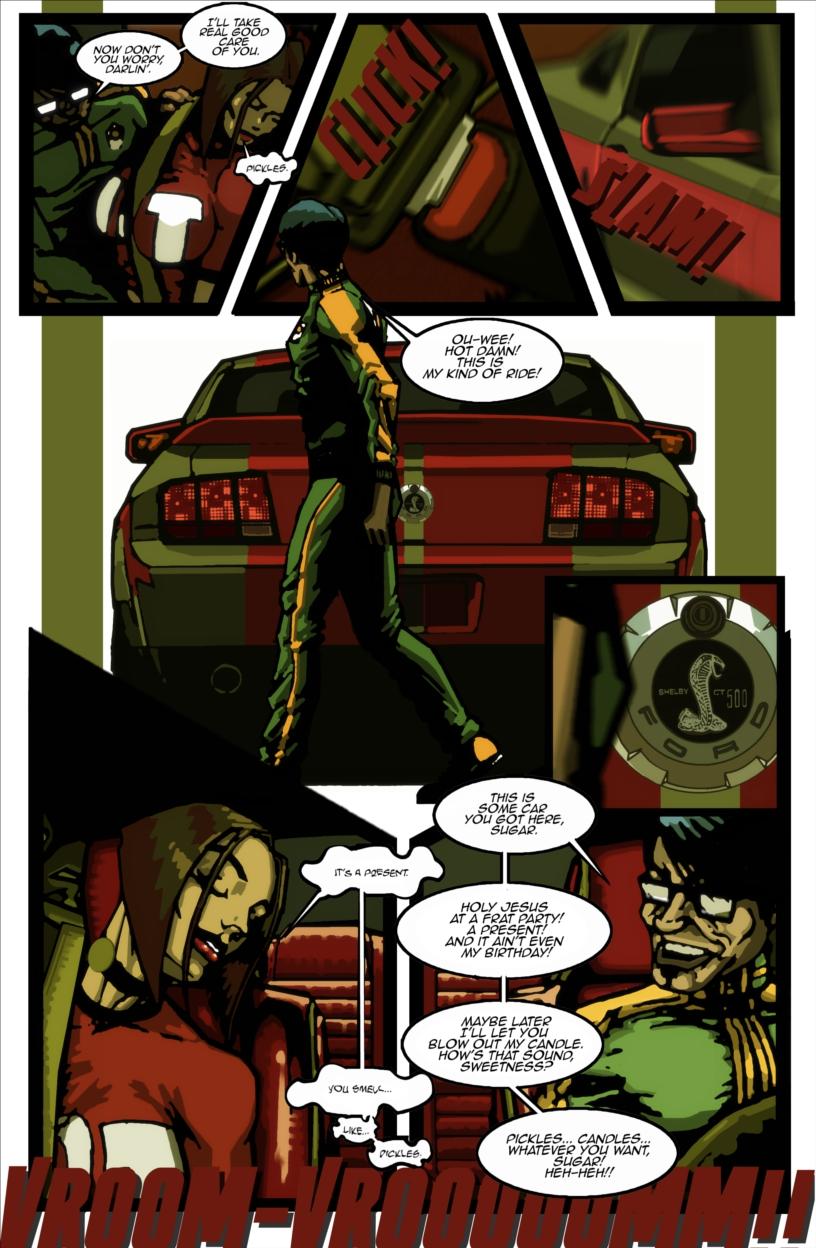 So I was all proud of myself last update thinking,
“Hey, I am getting the knack of this with updates.”
Well, that's last time I boast about being on time.

So gang, what are your thoughts on the comic so far?
I know we are only 11 pages in, but I want to get some feedback on atmosphere, art, storytelling, content, dialogue, etc.
Please don't be afraid to share in the comments below.
Hearing from ya'll helps confirm if I'm doing what I am intending with the story.
Some might want to wait til Chapter One is over, and I understand, but please any crit is helpful.

I appreciate all your comments.
thanks in advance.

If you like the comic, feel free to let others know.
I haven't gotten to the point of advertising on the web, with sites like Google or Project Wonderful, because I can't afford it right now and I'd like to build more of an archive.
But hopefully… someday, I can.
So for now, word of mouth is all I got.
So let the friends and family on Facebook, Myspace, Twitter, Chicken Wranglin' Quarterly, etc; know about the comic.
Many Virtual Hugs in advance!

See ya, hopefully, next week!

update 11/23/2009:
I know it has been quite a while since I have updated. My father had recently passed away and many other things which has made it difficult to work on the comic. But I am not quitting the comic. So I appreciate all the support and encouragement. I hope to have a new page soon.

My condolences. I know how life can get in the way. Hope you and your family are doing all right, and that you can continue soon, because doing something you love has a nice way of making things a little bit better. :)

Sorry about your father, I'm missing this comic, but I'll be patient.

Great page!!! Love the layout on this.

I'm really getting into it, nice rehash. Although of course I am partial to the old stuff, this is definitely getting me hooked.

stunning work, glad to have found it.

I agree with DAJB, you just could have called it "Shin blood/hound" or whatever the Japanese are constantly doing, updating their old franchises... I think I said it once before, this is one of these perfect comics to me. "Perfect" not in the sense that it can't actually be better (if that's not a contradiction), but in the sense that it all works perfectly together - the concept, writing, layout and artwork. Well, okay, I'd need to see blood/hound appear before I'll pass judgment :P But it certainly is a huge improvement over the original blood/hound, and you I was a big fan from the get-go.

She's hot alright, but...my mom taught me better than that.

You know I love it.

oh i know all abouts the pickles. looking good dude.

Not looking good for Ms Hottie! The art style and the approach to the story-telling is [i]so[/i] different from the original, you could have renamed it and treated this as a different comic. That way, you'd have been able to get a feature out of this!

interesting colors in this one... almost as sleazy as this guy is, heh. You should design some simple small buttons with your logo and post them here, so people can link you on their site. *ahem, me*

It's good to see a date rapist practice driving safety. That's right, always remember to buckle in your victims, kids.

Great page, layout, colour choices - I like the way you dealt with the word balloons too. The characterisations are strong too - everyone hates that guy!

I'm hooked. I've been a reader from the previous version. I must admit that I prefer this new version, the colors, the story and the new atmosphere.

Thoughts: I don't care too much for all that green. I do not like the guy at all. He is a creep and worse. When will Bloodhound make an apperance? At her door, I hope. Story is good so far, but kind of chilling. It's that guy. Art is as good as ever. I miss the rats...

The one interesting thing I can say is I feel like you've embraced the urban setting more than in your first version. But it is too early for me to want to say much :p

Obviously the artwork kicks ass but I also like your page layouts. I especially like the light and shadow as well as the colours. Either you know your colour theory intimately or you're a natural (or both). Your use of Photoshop effects are always an enhancement and never gratuitous. If this were on the news stand I would have picked it up just looking at the first page but I would be even more impressed with each page. As for the story... let me comment later. I'm not familiar with your comic but so far you have my attention. Just the pacing has me hanging on each update. Just take your time as long as it produces quality like this.

Art that's "commercial" - that is to say, it will reproduce well and translate into merchandise - without being simplistic. An interestingly distinct color palette. Great layout. 11 pages in, it's kind of hard to comment on the story per se, but you have a great villain. As for "HOT" girl - I'm not sure if she's a main character or a plot device. In horror tradition, she's slutty enough to "deserve" what's in the villian's mind, but perhaps not so slutty that she won't be saved. (Not being blond adds to her chances for survival.) schedule: Well, you have a complex, labor intense style, so once a week is a decent rate if you have a life. There's always a trade-off between story and art, how much will be shown and how much will be told. I'm making the completely opposite choice over at "23" - which is much more an illustrated story, and as that requires a LOT of pages, I am going for crude, loose black and white. In Dreamwalkers, I chose to model "real life" in grey and dream reality in full color, aiming for about a third of the comic to be in color, allowing me to keep up a three day a week update schedule. So far, since restarting the story and fixing on a schedule, I haven't had to blow it off. But I'd say that for artwork of this quality and technical difficulty - cityscapes, crowd scenes, cars - once a week is just fine, and it certainly has potential for print. One critique or comment; in a couple of your pages, I've seen "matte lines" around charactors, from layer merges, I assume. I'm not sure if it's a bad thing or a good thing, but I don't see it in this page. However, I could see it being worked into your overall style deliberately. Or, I could see you deciding to eliminate all trace. At any rate, if it is done, it should clearly be part of the look, even if it is a process artifact.

Yeah...I think this is gunning for a feature!

I personally love your style, and I'm really curious to see how this leads up to the main storyline. Good work so far! :D