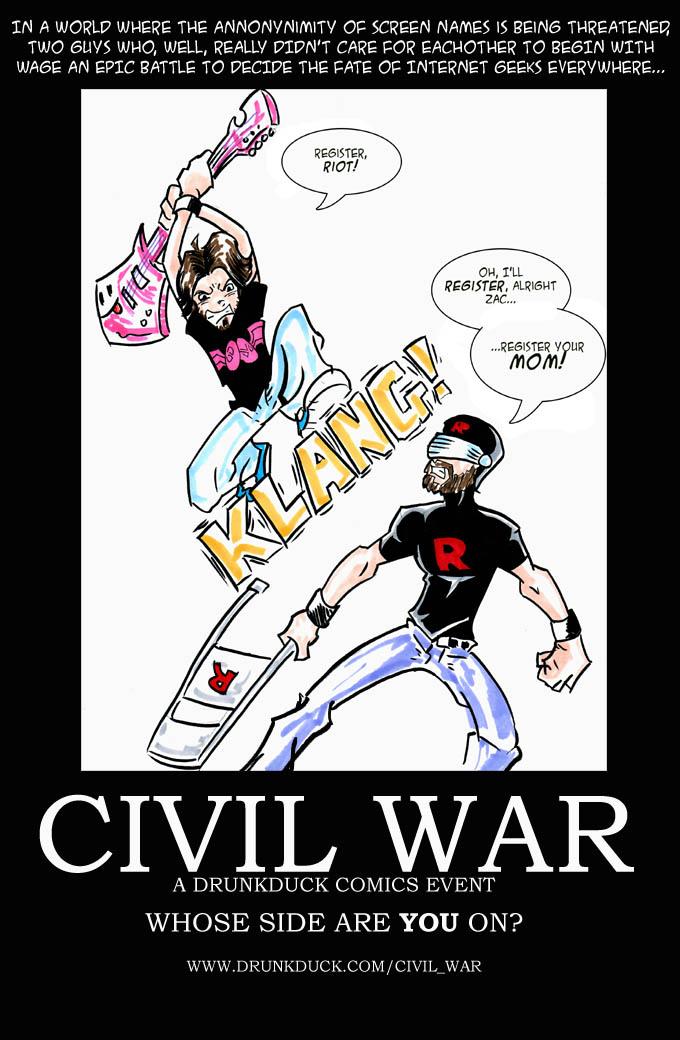 Hey, gang! Mr. Riot here.
So, while at Wizard World, Zac and I started battlinge achother in sketch form…sketches of us hurting eachother in various ways. This led to a fun-filled rivalry over the course of the con with everyone finding themselves dragged into it.

Then, it turned into this: The Drunk Duck Civil War.

The Story is such: A comment made in jest leads Zac and I to believe that all Drunk Duck members will be forced to change their usernames to their REAL names or be booted. Zac, since his username IS his real name, agrees. I, since mine isn't, doesn't…and so the line in the sand is drawn. Zac as the pro-registration “hero”, and me as the anti-registration hero.

The goal is to drag nearly EVERYONE here at DrunkDuck.com into this. As users begin to choose sides, they will be included in the pages of the comic on their chosen side.

WHOSE SIDE ARE YOU ON?

EDIT BY ZAC:
Okay Ladies and Gents…Just to clear things up. YOU WON'T Actually have to change your avatar name or anything. You can roleplay that your name is your username… Riot really is the Captain America figure no? Continue picking Riot's side! Anywho I hope you enjoy the next few months of Drunk Duck: Civil War! There's a lot planned and it involves you all! Anyways, Until We Meet again!
Zac
WHOSE SIDE ARE YOU ON?

*salutes Zac* Me and my cameo are with you.

changed my mind I want my username to stay the same next thing you'll ask is we need to know how your face looks so RIOT!!

IM WITH RIOT!!!! YOU WILL NEVER KNOW MY NAME!

We're with you Riot! All da way!

I hate pokemon (The children's anime series, that is, I'm getting diamond or pearl, the new pokemon vedio-game generation, soon.), but is that a Team Rocket shirt? >.>

oh god, this is going to be hilarious! I am with Riot!

I choose Riot's side. For two reasons: I think having your real name as your aliase is dumb since you don't KNOW the people who could be reading it(I'm paranoid ya'know.) and my name would be waaaaay to long for a screan name anyway since it's a first name, middle name, long last name, and my clan name. Hooray for Scottish heritidge!!! I get four friggin' names!!!! Eheheheheheheh!!!

I'd change my Username to Duke.I side with Zac.[I know I don't really have to change.I read the Author note.]