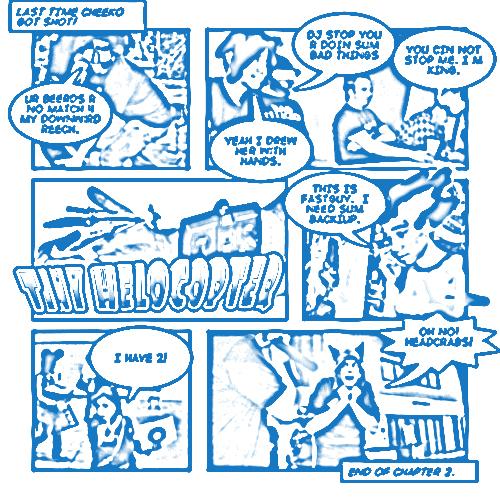 EDIT: REAL UPDATE THING COMING LATER TODAY. DRUNK DUCK DELETED MY NEWS ENTRY SO I HAVE TO MAKE A NEW ONE. CHECK BACK IN A BIT

Oh, it's april 1st?
I TRIED REALLY HARD ON THIS ONE. IT TOOK FOREVER TO DRAW T_T

ALL THE ROSTERS HAVE BEEN UPDATED.

In case you can't read blurry the Boxes from top left to bottom right say…or if you're lazy click here for a better REAL LIFE resolution http://content-comics.drunkduck.com/comics/c/civil_war/gfx/c5c9850b5f4584fbfea74579f7917904.jpg
:
LAST TIME CHEEKO GOT SHOT.

I have a game.
Why don't a few of you give a shot at doing the next page.
;) We'll see what happens.

I'm down for drawing a few, if someone else wants to write them.

And thats how it never got updated again... Anyone feel like doing a few pages? I might one I break up for the christams holidays :) It'd be nice to bring DDCW back from the dead.

Any ideas when this'll be updated again?

I still check this page daily...^_^; *sits depressed in a corner* Not that I update as often, or as much...

I find it comforting that this comic is updating just as much as I do.

Must know what happen to Cheeko must know! XP. Interesting page.

I don't think people noticed the contest in the comments.

Not to seem like all those impatient people who allegedly send you guys death threats, but I reeeeeeeeally miss this comic...

My brain feels satisfied with this conclusion. XP

My first reaon was, "WTF, did the account get hacked or sumthin'?!" Lol. Nice joke.

ok, not to be a downer on this, but wtf with the animating? I can't see what the hell's going on.

I think this is your best page yet.

I can't tell what the heck is gong on with this page. This one gets a major WTF?!!

I'm sorry, but something about ComicLife just makes me hate it. Fundamentally. Like, even when it's blank.

and this epic adventure just keeps rolling along!