Alright everyone. It has been almost 2 years since a Mafia game has been played. I have decided to give it a shot at bringing it back. The Awards are not as busy yet, so I thought this would be a good time. This game goes by the basic rules of mafia. In case you didn't know Mafia is a forum based role playing game where players play the part of villagers or mafia members who are fighting over the control of their town. This is a turned based game where each turn takes 24 hours and alternates between day and night. The villagers are more active during the day while the mafia rules the night. In order to win you have to communicate with the other players,
form alliances, betray or protect and do whatever it takes for your side to succeed. That's all you need to know really. The best way to learn the game is to play it and I will take special care to ensure that you won't get lost. Well now? What are you waiting for? Sign up so we can get this madness started!

Cycles will start around 8pm CST (1 am GMT). I will give fair enough warning if this deviates.

Night actions will go in the order that they are received. However, an RNG will be used to pick the first action that occurs.

(online) posts: 5,774 joined: 8-10-2007
These are the roles that may be assigned to participants of the game. I will not have the counts until the sign ups are over. I try to keep the roles proportionate.

TOWNIE ROLES
The townies' win condition is to find and kill all mafias.

Mayor
The Mayor is elected at the start of the game and has numerous roles. His special abilities are:
Seal of the Mayor: Increased vote count of 2
Desperate times call for desperate measures: Ability to declare up to two double lynches anytime during the game (must notify me during night cycle or early on in the day so voting is arranged accordingly). When double lynches are in effect each player gets two votes on two different people.
Did you ever know that you're my hero?: The mayor cannot be killed during the night while his bodyguard(s) are alive. Only the Mayor will know who the bodyguards are.
Let's celebrate!: On Day One, the newly elected mayor can declare an insta-lynch

Pardoner
As a check and balance to the Mayor, the pardoner is the runner up to the Mayor. He has the protection of the very same bodyguards as the Mayor and thus remains invincible at night. His special ability, however, is to pardon up to 2 people from being lynched at any time during the course of the game. He must notify me while voting is coming to a close (you'll usually be able to tell who is going to get lynched towards the end of voting) or right after I have ended it. I will wait a bit between votes being tallied and the shift into night when people are lynched so you will also have time then to notify me. The pardoner may not pardon himself and he may not pardon more than one person per day.

Bodyguard
Random townies will receive the role of bodyguard once the mayor and pardoner have been elected. The mayor alone will know who these people are. The bodyguard cannot be a mafia or special role, he can only be a regular townie. (Might delete this role and just give the Pardoner and Mayor extra lives instead)

Vigilante
You are the caped crusader of Townston. A masked man who has decided to take the law into his own hands. Each night you can target and kill someone who you believes to be a villain. Be careful who you chose though because you just might be taking out a friendly.

Paramedic
You have the ability to watch one other player during the night. You may choose not to use this ability also. When a player is watched he cannot die unless the number of people attacking him outnumbers the number of people watching him or his night lives. In other words if two mafia attack a person being watched by one paramedic, the person will die. A clue will not be left behind if he is saved, the town won't know who was saved.

Veteran
You've been around the block a few times and know how to escape an attack on your life. But for how long? The veteran gets 2 night lives, meaning he must be hit by 2 attackers to kill him (much like having paramedics watching over you, except you lose one life if you incur one attack). If a paramedic is protecting you will not lose a life for the hit the paramedic protects. If you incur a hit I will notify you the following day.

Paranoid
While pro-town, the paranoid is a wee bit unhinged by his experiences in the war. The Paranoid will kill whoever was the first person to target him in any way during the night, whether it be mafia or villager (such as a paramedic opting to protect him). The Paranoid is unable to NOT kill, but will only kill one person a night. The paranoid due to his disorder, he thinks he is just a townie.

Detective
You have three abilities you may use. You have the ability to ask me whether or not a specific person committed the murder and get a yes/no answer. You have the ability to, 2 times a game, ask me what alignment a person is. And for the last ability you may ask me how many mafia voted to lynch a specific person after the conclusion of voting (cannot use this on mayor election). You may only use one ability per day/night cycle. You cannot ask about both people in office.

Townie
You are a dedicated townie! Although you do not have any special abilities, you participate by solving clues, networking, and voting.

MAFIA ROLES
The mafia's win condition is to kill all townies or enough townies so that the numbers are equal or less than the number of alive mafias. Unlike townies, all mafias know who each other are. With the exception of the mad hatter and godfather, all mafia members can kill once per night cycle. A mafia cannot kill a mafia however.

Godfather
The godfather is the undisputed leader of the Mafia and has several special abilities in his arsenal.
Send him a message: The godfather is able to leave a severed horse head in the target's bed. This will scare the targeted player, causing him to go into hiding for the next day and night cycle. During this time the player can't perform any action at all. He can't vote for the next lynch and he can't use his powers if he has any. A person who's already been targeted with a horse head attack can't be targeted again.
Call in a favor: The Godfather can once per game, cancel a lynch. If this ability is used during lynching complications, the fight will be prevented.
Welcome to the family: The godfather can turn one of the villagers into a made man, causing him to become a member of the mafia and can thus share in their victory. The target has to be a willing applicant and thus can not be changed into a mafia member without his permission. This will alter his alignment, turning him into a criminal (if he isn't one to begin with), and thus he needs to be lynched/killed in order for the town to win. This will not alter the role of the player in any way and he will still have access to his original powers. This power can only be used once.
Behind the curtains: The Godfather doesn't dirty his hands since he has his goons to carry out his orders. The godfather will appear as an innocent villager to the detective. He's also considered to be protected if he's attacked during the nigh.
Now it's personal: The godfather has decided to take actions into his own hands. By brandishing his pistol the leader has taken to the streets. He gains the ability to kill once per night but looses all benefits he received from his Behind the curtains power. If the godfather is the only mafia member left, this power is automatically activated.

Mad Bomber
The mad hatter's special ability is to plant two bombs throughout the whole game on two specific players. He may choose when and who to plant these bombs. Should the mad hatter dies, kaboom! Those whom he planted the bomb to will die as well. He can also detonate a bomb whenever he sees fit. (A clue will be left in this case.) If the target dies before you do however, you lose the bomb.

Mafia
You are a regular mafia member. You get to stab someone in the face every night cycle.

SPECIAL ROLES
You play by our own rules and have your own win conditions.

(online) posts: 1,109 joined: 2-26-2008
i will play but we need to set up some kind of work around the pqs since the notification systems still doesn't work, maybe a chazty room for the mafia or something.

and you will all die.  the PQs will be your deathhhhhhhhhhh
You TOO can be (multiple choice)
link
Niccea at 6:16PM, April 23, 2013

(online) posts: 5,774 joined: 8-10-2007
I was just going to be a jerk and have y'all regularly check your PQs for stuff from me. Communicating amongst yourselves will be your own problem.

I was just going to be a jerk and have y'all regularly check your PQs for stuff from me. Communicating amongst yourselves will be your own problem. 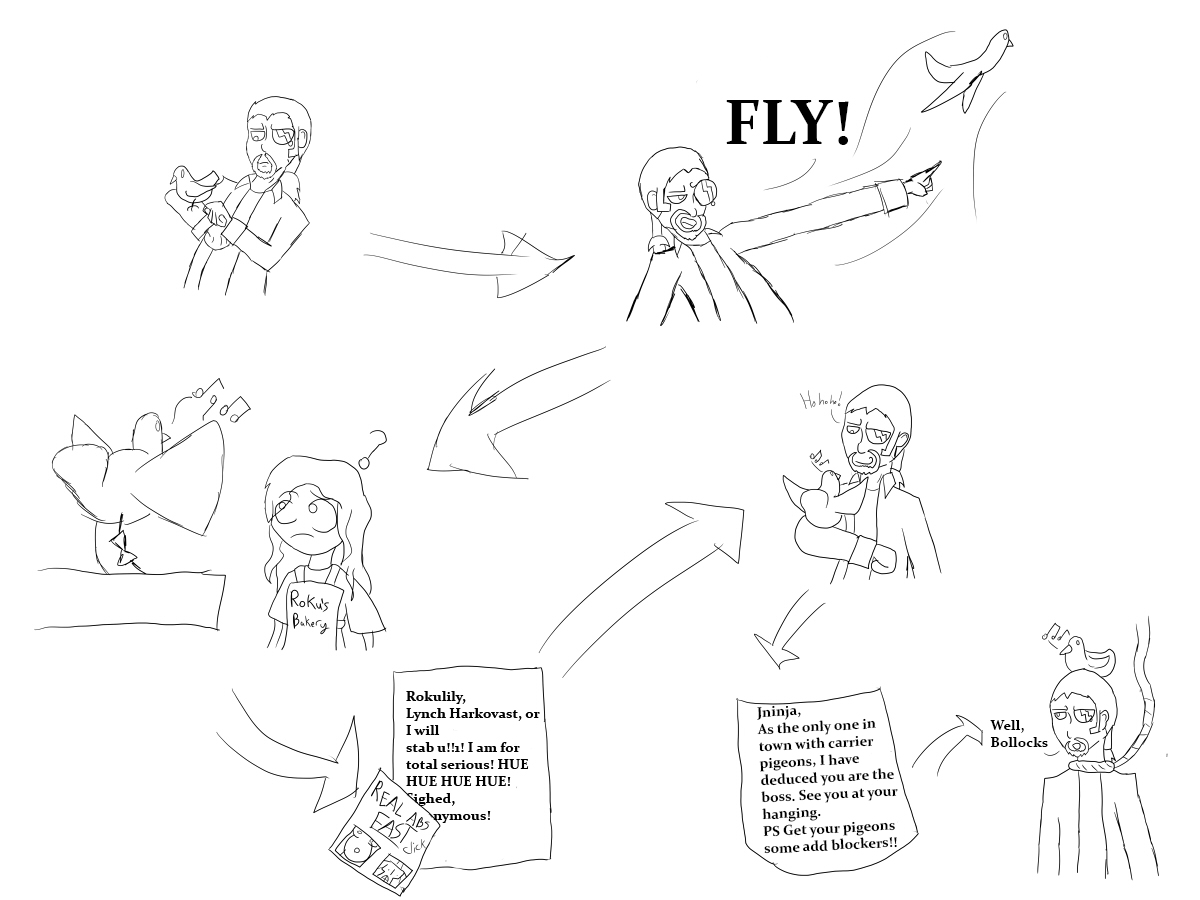 *starts tearing up* I  never thought that it would return. I'm genuinly tearing up here.

I ask, because I always lamented the fact that we never got to get to game number 50, which is L in roman numerals. The idea of being so close to the perfect excuse to do a Death note themed game is torturous.
Those were my two cents.
If you have any other questions, please deposit a quarter. 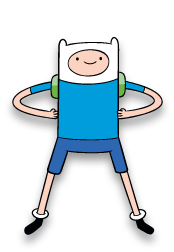 x
Niccea wrote:
I will not be giving this game the roman numeral nor will I reset the numbers. You both win. (online) posts: 2,154 joined: 8-23-2010
aw man. Biff went and killed the mafia thread before the game even got going. That's gotta be some kind of award. Pre-emptive killing and all.

Or is this game going to happen? If yes, then Jay should round up the newbies since he'll be taking most frequent aim.

(online) posts: 5,774 joined: 8-10-2007
Crocty left mafia even beforI haven't heard from her. I have been trying to get a hold of her for other reasons. As for the dutchmand. Got no idea who you are talking about. If it is the Vast. He really isn't on this site.

(online) posts: 1,165 joined: 9-25-2008
Aye, I can honestly say I have no idea what you mean by taking aim. If you are implying I will get a kill role and hunt them mercilously for sport, you haven't been paying attention to my record. Cause despite a decent sized career of mafia-ing, my direct kills are still in the single didgets. Now, if you mean I will get them lynched for arbitrary reasons, yeah, I'm your guy!
Why that's just crazy enough to walrus!
link
gullas at 4:40AM, April 30, 2013

And I'm sorry I didn't think of these guys earlier:  any word on Flying Green Monkey and Anthony Mercer?
You TOO can be (multiple choice)
link
TheFlyingGreenMonkey at 9:44PM, April 30, 2013