A bounty hunter who relishes both the thrill of the hunt and the large cash payment that comes with hunting down super-powered criminals. Ballista has always been willing to bend the rules in pursuit of her quarry, but after a couple of particularly reckless (and successful) captures, she found herself facing numerous property damage, endangerment and manslaughter charges.  This could potentially have been resolved, but Lena took offence to what she saw as ingratitude for all she had done for this country (and beyond).  She became a mercenary and assassin, taking particular pleasure in commission of contracts against those she considers to have wronged her: law enforcement, politicians and particularly the legal profession.

POWERS: Ballista has the power to cause any inanimate object she touches to rapidly  grow.  She can, optionally, include a time delay before the growth takes effect (up to around an hour). She can also undo the effect on touch. (It may or may not also lapse with time - I'm still working out the precise limitations).
Ballista has a pragmatic and inventive mind and has been able to leverage this seemingly minor power to take down numerous opponents above her apparent weight class.

Some of her favourite tricks include:
* Her namesake weapon - a mini-crossbow mounted under her wrist. It fires darts which grow (up to the size of tree trunks) in flight.
* A handful of thrown or rolled marbles become massive spheres (momentum is not lost in the transformation).
* standing on a small metal disc and growing it to reach great heights or even to launch herself into the air.
* using strategically-placed objects as “time bombs” (particularly messy in enclosed spaces)
* growing a person's clothes to encumber them. (This is especially effective against foes utilising power armour!).
etc.

For purposes of this story, when Lena realises she's been located, her first move will probably be to throw her coat in the face of her pursuer while growing it so her pursuer becomes entangled.
I'm not sure if she alone is enough villain for this story. She has the potential to be a major annoyance for the group assembled here, especially if their inexperience working together causes them to get in each other's way. 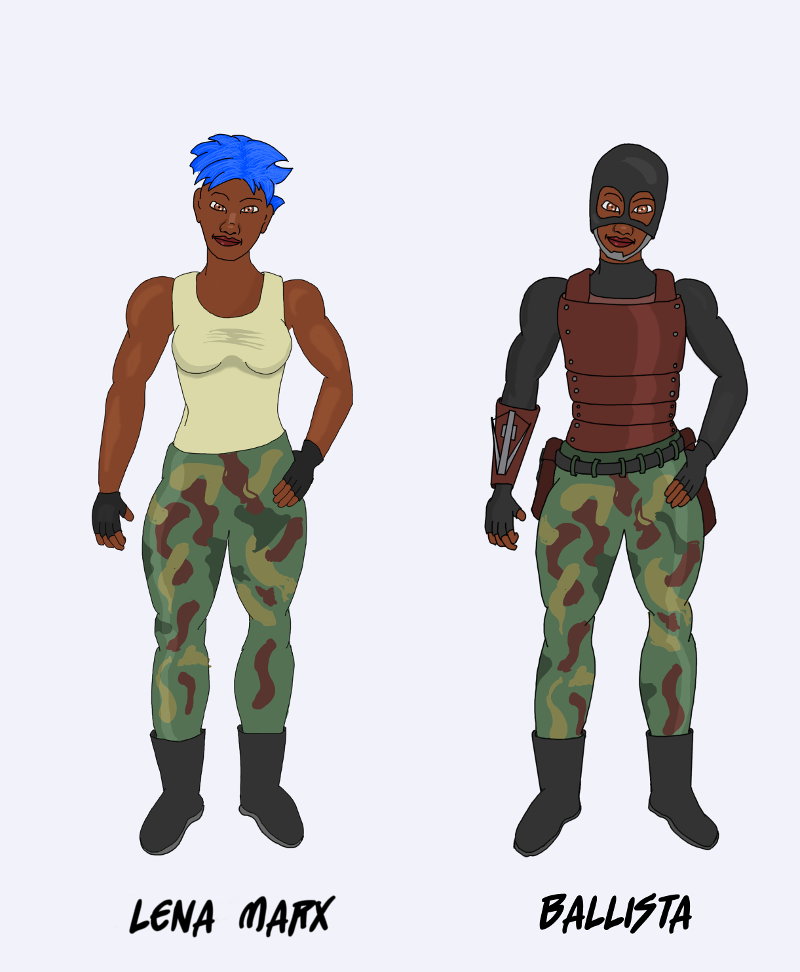 (online) posts: 329 joined: 4-24-2007
Interesting character and a really good design. I could see her and Militia having a nice showdown :D
I like my horror films like I love my burgers…Full of Cheese!!