(offline) posts: 100 joined: 9-21-2018
Long story short I walked out of the 2015 Peanuts movie about halfway in. Not because it wasn't faithful, which it was. Not because the CGI wasn't impressive, which on the contrary: it blew my mind the same way the Captain Underpants movie did. Not even because it didn't capture the spirit of Charles M. Schulz's comic strip 120% as someone who has read, seen, and even made parody comics of Peanuts in middle school.

In fact, I'm pretty sure this was probably the perfect Peanuts movie, alongside “Race for your life, Charlie Brown” and “Snoopy Come Home”. And that was probably the issue at the time: the movie was TOO perfect. Too spot-on. Too accurately faithful to the source material without adding something that wouldn't anger puritans. I KNEW LUCY WAS GOING TO DO THE OBVIOUS WITHOUT ACTUALLY SEEING IT HAPPEN, SO TOO PREDICTABLE.

And therefore too “been there, done that”.

What I'm basically saying is that I was more entertained by “It's a Mad World, Charlie Brown” (which was basically the English “Bring Me the Head of Charlie Brown”) or, if I was to be less vulgar, Coldplay's song.

But the reason I'm thinking about returning to it is because I just recently discovered “The Art and Making of The Peanuts movie” and, I have to tell ya, am almost jealous to tears by how passionate and personally ambitious they were at making sure you watched it by someone who gives a golden @#$% more than even the biggest fan in the world. 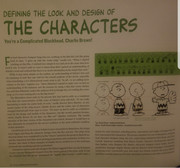 Just the amount of care and in-depth research they did on capturing every stroke, every subtle linework and even bodytype transition between each decade, which spanned half a friggin century since “Lil' Folks” came into being, almost makes me feel like the good in the world ISN'T weaker than the bad (otherwise I'd still be a fan of ANY Newspaper comic strips, period)

Yes, I'm still sort of grumpy by the fact they didn't even give Peggy Jean a cameo (while the first Fullmetal Alchemist anime adaptation at least had the decency to let Ling Yao appear for a brief yet glorious 3 seconds before receiving his big break in Brotherhood) but I can't deny that I feel guilty for having ignored what wasn't even your average animated movie with something that wouldn't even be this groundbreaking until “Into The Spiderverse” would come along.

So as someone who used to be a fairly big Peanuts fan yet gave it up due to blurring the line between passion and obsession, should I give it another chance?

Or should I at least just toughen up, finish seeing it and THEN be one to judge?

I know it seems like I'm making a big deal about it, but the movie took eight years to make. I'm having second thoughts about it in only four.
link
Your ad here, right now