(online) posts: 28,056 joined: 1-2-2004
I have one that I'm proud off. I can do perfect caterwauls on a number of ranges and creative variations.
It freaks the hell out of actual cats. Confuses the poor babies so that they come to me with big wide, fully dilated eyes and try and work out what's happening. :D

But it's absolutely useless and has no real world application except to annoy the shit out of people and frame cats for disturbances they didn't cause. XD

It's not so much useless as it is unnecessary (and subjective/biased/debatable) but I can give images a proper feel for the decade they're aiming in terms of imagery (if not music/film/etc.)

To make it more clear:

You know how people who try to make something look/feel 80sish usually end up making it look like something that anyone could've made in the late 90s/early 2000s?

It's because they're mostly using one reference in the form of a picture/movie/book they liked from ONLY that decade while everything else is based on their own knowledge/memory that they've accrued since that decade.

Here's an example of my own where I try to combine characters from an MLP:FiM fancomic with Akira Toriyama's style:

rather than emanate Toriyama's style, one could make the argument it looks more like something from FMA or some other early 2000s manga rather than one from the late 80s/early 90s. Another good example, in terms of music trying its best to emenate the early 90s yet mostly coming across as a synthwave remix version of 2006's “Here in your Arms” by Hellogoodbye is “TooTimeTooTimeTooTime” by The 1975:

An example where I don't do as bad of a job at trying to harness that 80s spirit is this pic I did for a comic, imo: 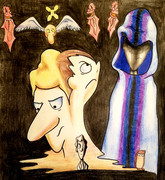 Rather than look for 80s references, I used a panel from the 1974 “Heart of Thomas” manga, combined with the stylistic colouring/linework from the cover of a “Casper the Friendly Ghost” comic from 1958, and added my own touches from today which would'nt have been available from either one of those decades while still making sure my memories/mental experiences were my only references. This gives me this equation/algorythm:

Now I like to think that great minds think alike because although I don't know what influences they used musically(despite the song being spot on nevertheless) BMTH and Grime's video for “Nihilist Blues” spot on captures the feel of 1997 by making it seem as if everything that is happening in front of us, regardless of the apparent modernist touches, came from a computer in 1975:

And that's an even better way of looking at how you want to gain influence from a particular decade: take the number between the year your aiming for and your current year and subtract the amount from the former. Your result will be your point of reference.

(offline) posts: 364 joined: 1-6-2004
Four-leaf (and up) clover finding. I've found hundreds of them on separate occasions, always spot the first one when I'm moving. If I'm not either walking or running, they're less obvious. I first started finding them when I was still in school on the cross country team, would collect them on the practice run of the course and dispense them to the team for “good luck.” These days I find them while out on walks with Nick, and he's always comically frustrated because he's never found one!

…I wish I could use this to find morels though, last time I found any they'd already been set upon by slugs!
link
usedbooks at 1:37PM, March 11, 2019

@Amelius ○_○ If thats a useless skill then I'd be amazed and intimidated at your normal skills.

(offline) posts: 383 joined: 10-13-2010
If anyone loses something sharp or pointy I can always find it for them … by standing on it. Lost lego. Found it. Lost needle. It's in my foot now. Can I market that one?
David ‘Gunwallace’ Tulloch, www.virtuallycomics.com

(offline) posts: 5,578 joined: 1-21-2008
As a polymath, every skill I have is practically useless and none are particularly cool. So I am doubly damned.

(online) posts: 3,339 joined: 2-24-2007
I also found out a couple years ago that I am really good at picking up and holding blue crabs with no fear or risk of getting pinched. If I liked eating sea food or catching crabs, it might not be useless. But it is mostly useless for me.

I can do amazing cartoon character impressions exactly one time and can never repeat it.

And I can make any conversation awkward and uncomfortable without trying.

You can use that in your job though :D

I'm pretty good at calming and catching animals, and dealing with aggressive ones too… The amount of times I had to rescue my stupid rabbit from the next door neighbour's backyard, carrying a full grown kicking and struggling adult male rabbit in one hand while I climbed a tree with the other.
Holding onto spooked, aggressive cats, sometimes more than one at a time.
Facing down big aggressive dogs…
Dealing with aggressive horses…
Lizards, snakes, spiders, emus, kangaroos…

I even caught two doves, one in each hand simultaneously, because they'd wondered into my house and couldn't get out- and I knew that catching them both at exactly the same time was the only way because the caught one would spook the free on and I'd never get it. So I had to sneak up silently and time my strike to just after they'd gotten over a periodic panicked flight and attempt at the window.

The trick with animals is dealing with them intuitively while also working out how they think and dealing with the realities and capabilities of the bodies (size, weight, teeth, claws etc), being very aware of the dangers.

Haven't had any practical use to that though.

Chameloncholic wrote:
I can disappear for years at a time.

Hahaha! Welcome back man! It's been quite a while…