(offline) posts: 9 joined: 2-5-2018
Good evening y'all (at least where I am). I'm here today to go over some updates regarding my comic series Coward of Valor. So to start.

Over the course of three years, there are now a total of twelve volumes to read, with ten in the main series and two side stories. I won't deny it's a feat but still, I'm not exactly satisfied with my work up until now. I find much of the writing and artwork to be amateurish and rushed, and though there is much to enjoy, I find a bit of ire in myself while going back to choice volumes.

So what does this mean? Well, I consider the comic you've been reading up until now to be complete. It is in its finished form and will receive no more updates aside from a short directory. This is because I will be doing the entire series over again from scratch.

From here on Coward of Valor will be separated into multiple books, and what I've made thus far (volumes 1-10) is considered Book One. I have started production of recreating every volume (now referred to as chapters for aesthetics) of Book One, improving the art, the script, and fixing little issues some (but especially myself) have with the originals.

So why separate the series at all?

1. I feel posting remakes of volumes to the already published series would cause unnecessary clutter and confusion.

2. And more importantly, I will also be continuing the series as I left off with every other chapter made. With every Book One chapter redone, it will be followed up with a brand new chapter, obviously going into Book Two. This is to insure people who just want to see the story move along won't have to wait TOO long, and of course to keep my own unwavering engagement to the narrative.

This means that Book One and Book Two will be getting updates nearly back to back, all with the original volumes available to read as well. I understand that this alone may cause some confusion, but I will do everything I can to guide readers new and old to where and what exactly to start with. At the end of the day, I find this to be the most comfortable and organized format.

So what can you expect from the remakes?

Well to start, as said before, I'm giving it my all to make the series look as nice as I can, taking my time on each and every page. I'd like to think I've improved dramatically as an artist over three years, and I mean to use the sharpened craft (and a proper pencil) to recreate scenes as they look in my head.
This includes tweaks to character designs, larger panels, and an overall more stylistic approach to each page.

Aside from art, you will find much of the script to be altered and improved, as well as scenes being reworked to fit with the Wanderealm's internal logic. You will also notice some entirely new scenes, especially in the earlier volumes, to expand upon the world and characters more than I did years ago.

There are no retcons planned that change the grander narrative. The idea being that aside from smaller scenes and details you could read the original series and move on to the new chapters with all the necessary information.

If you've been reading for the last what feels like forever, I have been working on a side story called Prattle's Tale. A darker comic set in the conquered kingdom of Grimmdar.
The idea is to explore some lands Val and company will never visit while also exploring more ideas for plots and characters within the Wanderealm. Unfortunately, while Coward of Valor has never been the cheeriest story, Prattle's Tale serves as such tonal whiplash to the rest of the series that I've kind of taken a distaste for it.
So my plans are to redo the first Prattle's Tale and create the others at a later time as its own separate story, so don't be surprised years down the line when I skip over Prattle's Tale in the volume list. The rest of the side chapters will be included with the main story as they more directly impact the narrative.

So when can I expect this?

I'd love to do my usual thing and say “NEXT WEEK” or “COMING TOMORROW WHHHOOOAAA!”, but that won't be the case. I am putting a lot more time into each page to ensure quality, so I'll need a little more time until you can see it.
Coward of Valor Book One will be coming on January 1st 2020 (mark your calendars I guess), so I hope you look forward with bated breath with what I'll have hatched up for this quirky little fantasy world. Until then I'll take any and all questions and suggestions about anything CoV related.

Here's one last huzzah for the old series and one quick over-sized look at the new. Ciao for now. - Matt 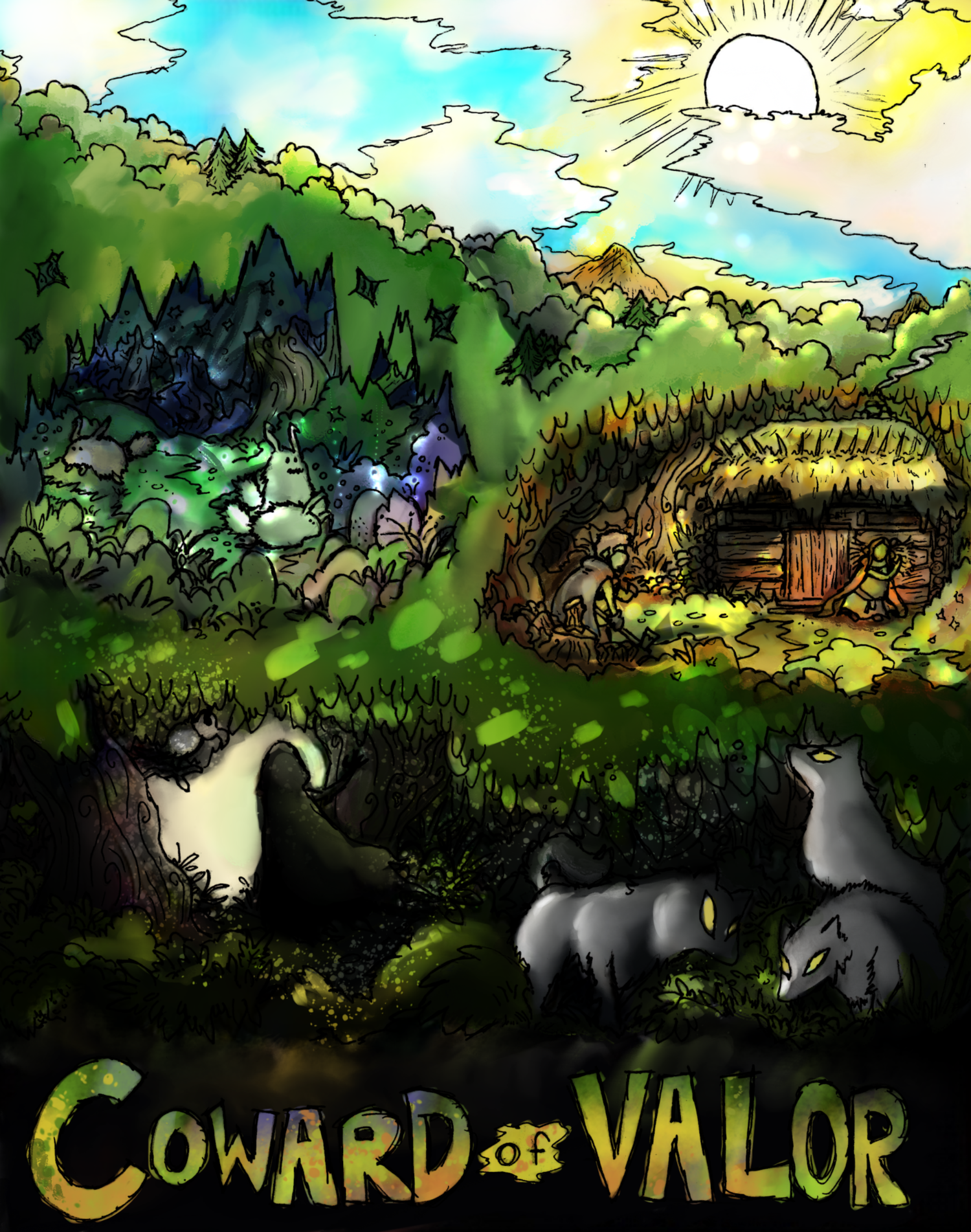