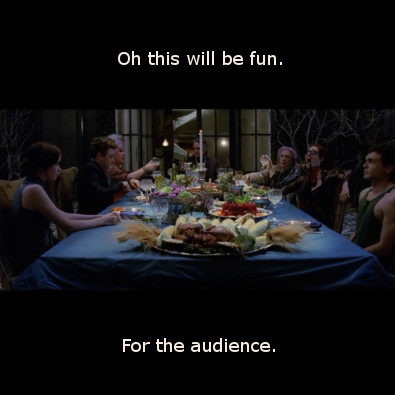 It’s the ultimate horror.
You are trapped with your very own demons.
You cannot escape- you will not be excused.
You will need to look at them, as they look back at you, and do a reckoning.

At least until dessert.

In my opinion, in all creative writing/art mediums, the table scene is the one where the characters really put themselves on the map, both in terms of their own personality and how they feel and act towards the other characters in the cast.

Forcing them to sit across or around a table and have to interact gives the artist (especially in visual mediums such as comics and film, but also in novels) the ability to bring brewing or underlying emotions, grudges, affiliations but also manners of manifesting it all to the forefront.

And it begins immediately! Just from them sitting down: where they pick to sit down, or forced to sit down in a rectangular table (which I think is the best type for such scenes) immediately implies a power structure or power grid between the characters. Likewise for the characters that for whatever reason opt not to sit down at all, or are forbidden to. The nuances and the impressions are endless!

And of course, after a table scene, the audience is far better informed about your cast that participated in it- and most likely have already formed emotional bonds and even possibly identified with one or more of them.

Because who hasn’t been part of a tense, awkward or chaotic table scene?

So have you employed a table scene in your comics to offset the relationships between your characters or even to flesh them out?

I can think of examples from any show that has an ensemble cast. All those staff briefing scenes in various Star Trek? The group meetings in superhero comics, the meal table talks in anime. Mob movies always have discussions (and murders) over pasta. And then there's two characters talking over a table for an entire movie like My dinner with Andre.

Interesting stuff! Never thought about this! Agreed on the value of the table scene. This made me think of that old movie "The Last Supper", where the group of young liberal roommates makes nice dinners for people they dislike politically and poison them.

My whole comic is in essence a table scene, although it's more of a coffee table. I like those kind of scenes, where all the action takes place in the minds of the cast. Character exposition and action at the same time.

Aw, thanks Oz! You guys inspire me to write them :D

VERY interesting. You're coming up with some great articles Tantz :D

@EssayBee: I love those movies too. Shows I watch have done homages to the "gathered detectives" motif as well. There's also Agatha Christie's "And Then There Were None" ("Ten Little Indians").

usedbooks--Glad you mentioned whodunits. Two of my favorites (although they're comedy whodunits) with great table scenes are Clue and Murder by Death. My favorite table scene that I've helped with is the one from Crossoverkill.

Ang Lee is a master of table/dinner scenes... They're key scenes in most of his movies. (Don't think I've ever had one in my own comics though...)

Yeah exactly! Twelve Angry Men is one huge table scene and it achieves everything it wants about all 12 characters!

I've had a couple table scenes - and you're so right; they're great scenes for establishing power, structure, and context, and for pivoting to a new direction in the story!!

Interesting. I've always LOATHED that scene in sitcoms, but it's interesting in a whodunnit -- often a scene of the crime or where the mysterious host announces his intentions. Never tried one myself. Kind of a miniature subgenre of bottle episode (which I've also not written but kind of wanted to). I might have to try one. My next arc (a Christmas arc) is lacking a B plot...

The next chapter of my RMS Olympic story line opens on a table scene. Of course that's literally has been on the drawning board since late 2012.......

Funny, thought you were talking about an actual family sit down like Thanksgiving or Christmas.