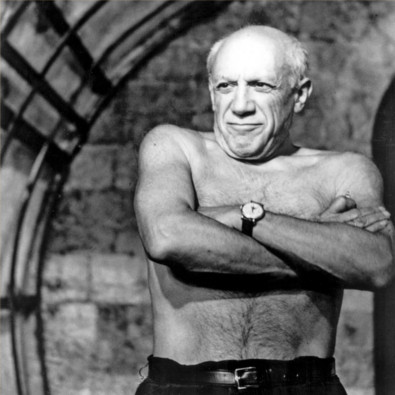 So this quote that, according to Google, is attributed to Picasso, popped up in my facebook feed, and now I want to talk about it.

At first I thought to make the newspost about plagiarism vs. inspiration, but it sounded something self explanatory, especially in a community of comic artists where everyone experiments with their own original ideas, plotlines and styles; one only needs to take a look at the front page thumbnails to realize as much (yes I’m paying all DDers a compliment!).

And it occurred to me to talk more about the process of artistic development that hides within this quote more than anything (and also that it proves Picasso was a negative little snark): we start off in developing our skills by copying copiously (I’m not sorry) from the work of others, more skillful than us.

It’s only after we’ve done that innumerable times that our own style begins to develop, and we start drawing independently. Hopefully, by then our personal style begins to emerge, too.
So what are we ‘stealing’ according to Picasso’s ignoble quote?

In my interpretation, we are stealing lenses through which we channel our art, be it the drawing aspect or the writing/plot-line aspect for comics. Lenses that have already been used by countless other artists before us, giving us a glimpse of the same world and the same themes we want to grapple with through different perspectives.

And so great artists use a vast array of several different of those lenses, from style to mood to storytelling method to genre, from subverting stereotypes and ‘tropes’ to expanding them to other roads not taken- and in doing so, such great artists create their own lens, for others to be inspired by and for others to ‘steal’ further down in order to create their own.

And so I end this rather philosophical musing of mine by saying that in the end, it’s unfair to call it ‘stealing’. It’s more like creating marble from sediment.

Have you ever felt, in current or in retrospect a process such as this? Have you ever taken an idea or a method or a style, and tweaked it to create something that is yours? Was it consciously done or intuitive?

Interesting take on this quote. I think some artists take it literally. For example, Jack Kirby said "if you like how someone draws hands, take those hands."

So which artist stole Picasso's shirt? This is a lesson I'm trying to get my daughter to grasp. She worries she is just copying others. My wife is an Art History major, and together we are slowly helping her to see it as a process to her own style. That copying is part of learning, and everyone has done it. Hopefully she'll get good enough to steal soon enough.

Art is one of the quintessential things about being human... Sure, we draw tidbits (ideas, styles, etc...) from others, but then we turn around and make art ourselves that's a new creation, that others see, and maybe take from... It's so organic - warm and fuzzy...!!

It's one thing just copy that image/ drawing line for line, stroke for stroke.(anyone can do that) But it's whole other thing to learn how that image was created. Once you figure out how that artist he draws his characters/style. Now you stole it. But here's the catch, for you understand the mechanics of how artist built the piece, you need be helluva artist. Gotta be able think and see like an artist. Anyways, that's how I see the quote.

Finding your own artstyle is a long road and you'll always improve with the help of seeing the world through different eyes, though i think i'd use inspiration not stealing as the right word as stealing indicates something else in my head (stealing artwork, copying directly).

I've been using this quote for decades. I steal all the time. That's the truth behind the quote. A good artist merely imitates another's work. A great artist takes it with both hands and makes it his own. Figuratively stealing it. It's no longer what it was. You have made it your own and when you take something belonging to another and make it yours; that's stealing. And a good thief never just gives back what has been stolen because it is theirs now.