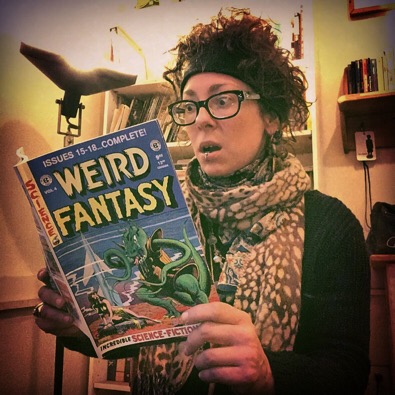 Welcome back, gang! Er, can I call y'all “gang”? Is that too informal or too assumptive about your willingness for complicity in my extra curricular activities? Eh, too bad. Once you're in the gang, there's only one way out. Now, while you're letting that sink in let's get back to beginnings, shall we? If you missed last week's exciting installment, don't worry, it's still on the internet. Because everything what happens on the internet stays on the internet. Forever. Yep. Everything. I'll give you a minute to let that sink in too.

All the images here are taken from my own collection and credited as adequately as possible. You might say, hey, there's no web comics in here! But this is a web comic site! What kind of charlatan are you, anyway?! Listen, I'll level with y'all- I'm at least like, ten kinds of charlatan, and a couple of those kinds ain't even been invented yet. And while there are certainly differences between comics published exclusively online and comics published in print, I think the fundamentals of good comics and good storytelling are the same regardless of the medium or mode of transporting that story from its creator to your eyes. So without further ado, let's get this started.

You've heard of the X-Men right? Anyhow, it's hard to believe in this day and age, but at one time the X-Men needed an introduction. Yeah, I know. Crazy. 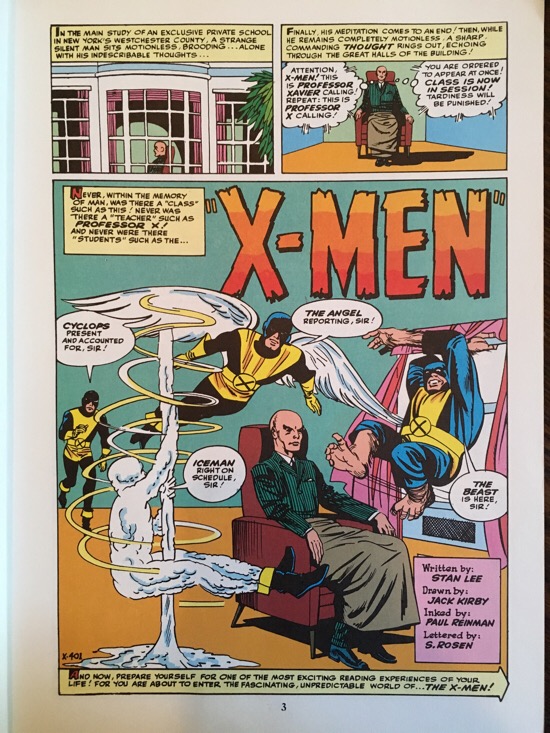 from X-Men #1, Stan Lee and Jack Kirby, 1963 Marvel Comics.
I'm starting with this example because it doesn't get much more simple and straightforward than this. Granted, comics were a little different fifty years ago, but this still works pretty damn well. Immediately we're told where we are, what's going on, and who the principle players are. Okay, no ordinary school, no ordinary teacher, no ordinary students. Got it. In the next few pages each of the four X-men displays his mutant powers. Cool stuff. 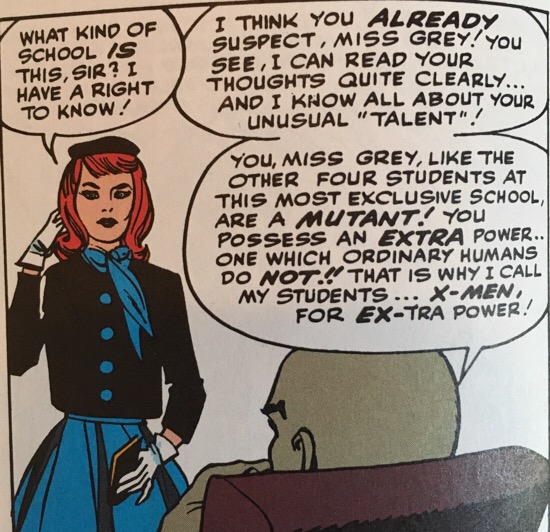 from X-Men #1, Stan Lee and Jack Kirby, 1963 Marvel Comics.
The introduction of an outsider into the comic's world (here, Jean's arrival at the school) at the beginning is a commonly used trope for a good reason: it allows the creator to introduce the reader to the world by having the outsider learn about it. It's natural for her to ask, “What the hell is the purpose of all this?” in her position, so the reader's same question gets answered. This gives the Professor the opportunity to tell the reader about mutants. Good mutants, bad mutants, all that. Speaking of bad mutants, oh snap let's cut to our villain, one such bad mutant named Magneto! So all this is in the first eleven pages. Out of the way. It's easy to see why this works: we're given information as we need to know it, and just enough information to understand and enjoy the conflict and action that follows. (spoiler alert: Magneto tries to pull some of his old bullshit and the X-men have to stop him!) 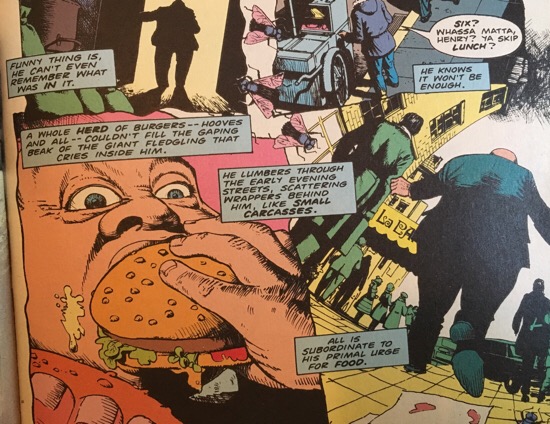 from HELLBLAZER #1, Jamie Delano and John Ridgway,Vertigo/DC Comics 1987
Okay, what's this? Definitely probably not like, our hero. So… 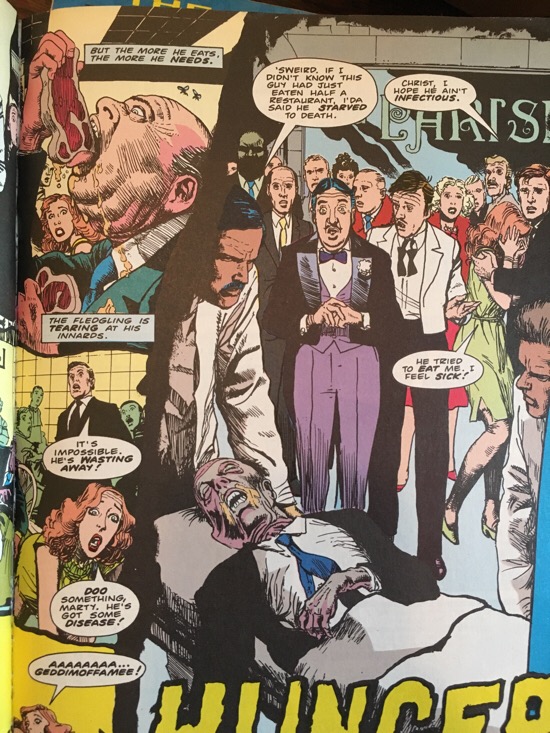 from HELLBLAZER #1, Jamie Delano and John Ridgway,Vertigo/DC Comics 1987
No seriously what is this? Exactly. We open with this bizarre and possibly not normal death scene (spoiler alert: it's totally not normal) before we're even introduced to our hero, John Constantine. And we don't have the Professor here to give us a handy concise rundown. In fact, when our titular hero does stumble on the scene he doesn't know much more about what's up with the weird shit than we do. But you know what? He's gonna find out, by golly. See, this does two things: it starts like any good detective story, really, with a mystery for our detective to solve. But it also allows the creator to show you exactly what kind of detective (spoiler alert: it's totally not a normal kind) Constantine is, and what kind of character too in how he goes about his, er, business. 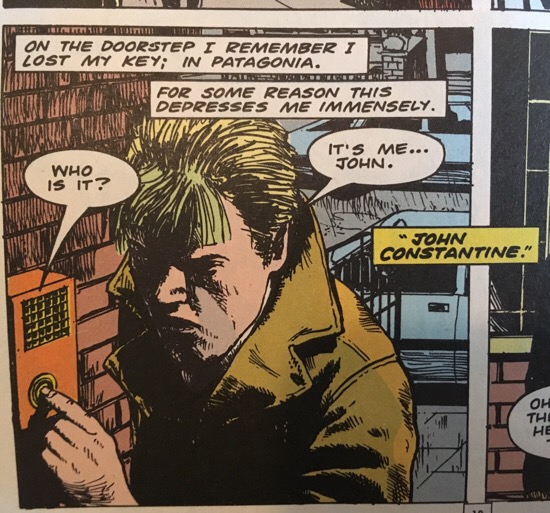 from HELLBLAZER #1, Jamie Delano and John Ridgway,Vertigo/DC Comics 1987
Much like the previous example, we're thrown into the present tense with the characters as the action unfolds, but in this case we're working towards finding out the who/when/where/why stuff as we progress through the story instead having it handed to us at the start. Some titles really stretch out this “what the hell is this about and where is it going?” part to create suspense; some stretch it out for quite a bit; and some are Grant Morrison, and feel like maybe they never really actually have to tell you at all. 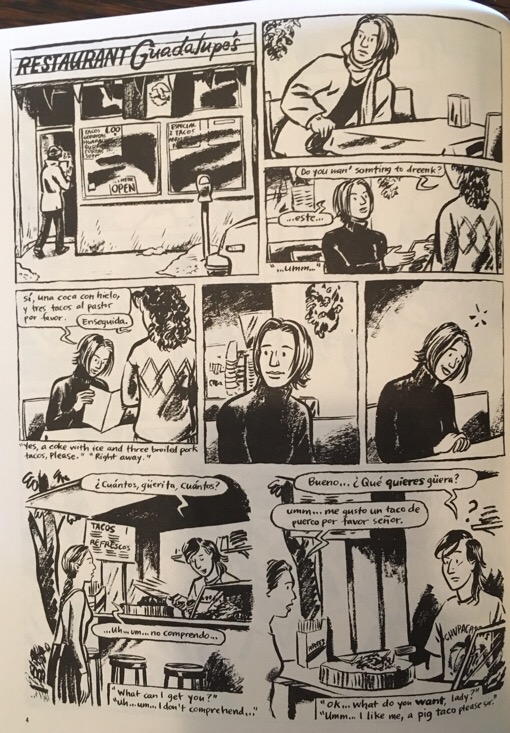 from LA PERDIDA, Jessica Abel, Pantheon Books 2006.
Okay, now for something completely different! This one here's an interesting example because it starts in the present, but after the main action of the story has reached its climax and resolution, and alternates scenes from the narrator's memory of her past. The narrative details a young woman's journey to Mexico to like, find herself or something, and in this opening scene she's obviously reflecting on a younger, less experienced self. At first the juxtaposed present/past scenes are lighthearted, but then they take a turn that let us know we're in for a different kind of story. (spoiler alert: shit gets real) 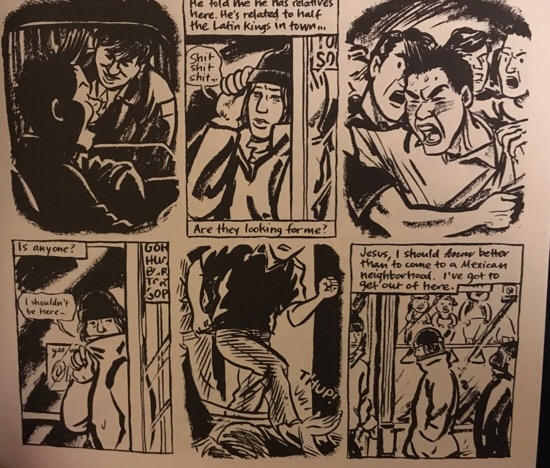 from LA PERDIDA, Jessica Abel, Pantheon Books 2006.
This kind of “looking back” opener often creates more questions for the readers than it answers, which is good on account of it keeps you reading, right? Why are these dudes looking for her? Or not? What could this lady have possibly done? It's another way of working towards those answers, except here we're working backwards to uncover them instead of forwards. 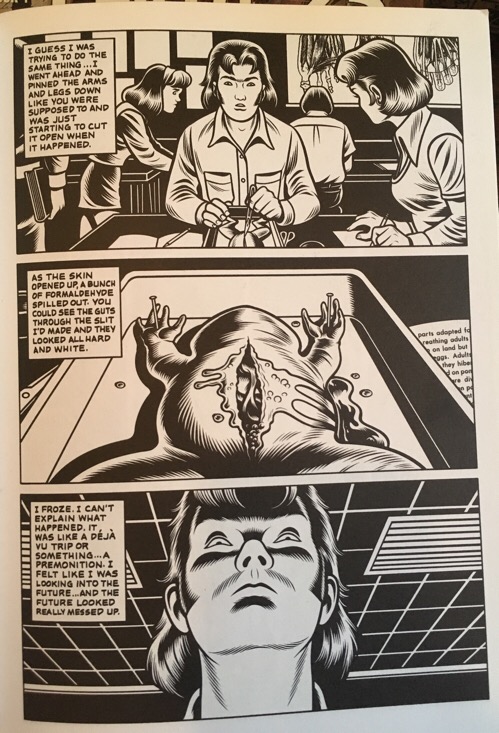 from BLACK HOLE, Charles Burns, Pantheon Books, 2005.
Foreshadowing! Here we have the narrator, speaking presumably from after the narrative has occurred, remembering something that happened before the story really starts. Again, it's a way of hinting at what kind of story we may be in for here. (spoiler alert: the future is really messed up!) 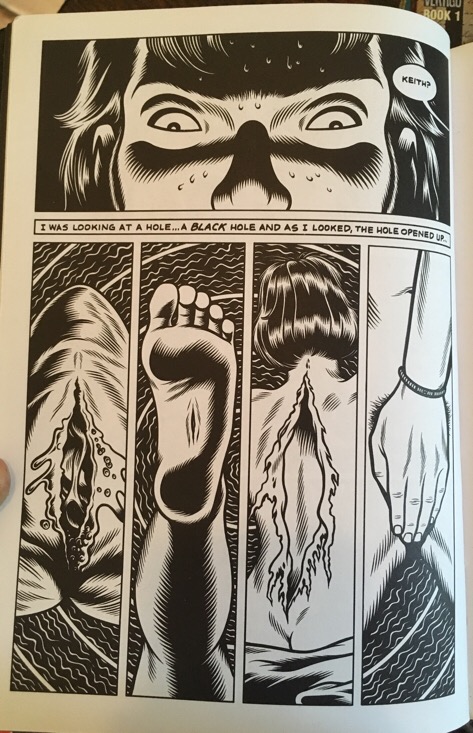 from BLACK HOLE, Charles Burns, Pantheon Books, 2005.
I gotta say that this book is one of the most visually stunning, masterfully sequenced graphic works out there. Seriously. And here we're introduced to some of the visual motifs and symbols that will reoccur throughout the narrative. In the same way as the previous example, this “looking back” or “memory” opener serves to preface the main narrative by setting a mood. By forcing the reader to wonder what is being hinted at, and what to make of the scraps of information they're starting with, these unanswered questions also provide a prompt of sorts of themes to keep in mind as they progress through the story. 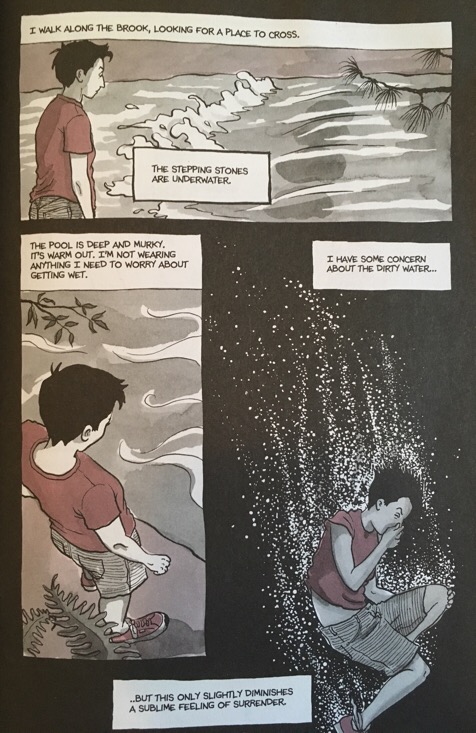 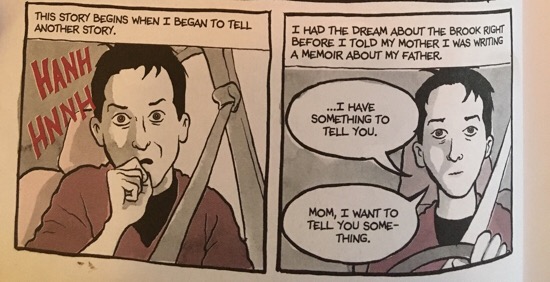 from ARE YOU MY MOTHER?, Alison Beschdel, Mariner Books, 2013.
This one here is probably one of the most ambitious and complex as far as its structure, so the weird self-referential start here is fitting. The narrative weaves in and out of the present, where the author is writing not the book that we're reading, but the book before that, but also unbeknownst to her this book; and into her past, her mother's past, their shared past, their shared present, an obscure, scholarly work on child psychology, the life of its author, dreams, therapy sessions… What sounds like a jumbled up mess with an idiot like me describing it is actually a brilliant if cerebral narrative structure. Now, this is the kind of thing you write if you have a New York Times bestseller and and publishing contract and plenty of time to lay out your super-complicated plot, or if you don't have to worry about explaining why the guys in funny costumes are fighting the other guys in funny costumes before, right?

Anyhow, those are some varied starts to great comics in my not-really-all-that-humble opinion, and uh, pretend I wrapped all this up in a nice little conclusion and I'll see y'all next week!

Great essay with some good examples. I've used several in my own work not that any here would know.

Whoa! This is some kind of advance story telling technique 😊

Who was there with me reading silver age comics fresh off the press?...uh..wait a minute...nobody?

Wow! This is amazing! I knew of course that beginnings offer a lot of creative potential for comic authors, but I don't think I ever truly realised before just how much.

Some great food for thought here, thanks for putting this little lot together, I enjoyed it wholeheartedly.

This is just excellent!! Very informative and a joy to read in its own right!! Cudos!! I've considered getting 'Black Hole', and now I really want it!!

God examples of all these concepts, Makes it all more real. I like how it gets darker and more complex as we go through it too. Especially with the last one, quite a contrast with X-men!