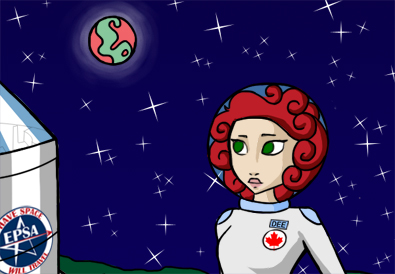 My city had a massive snowfall on Boxing Day this year – the day after Christmas, for you non-Canadians. Nothing too unusual for a Canadian winter, but even so the city always seems to grind to a halt when it happens. After having a neighbour help him get his car unstuck and then helping two other neighbours with the same task, my dad remarked that he thought this was one of the reasons that Canadians are a little bit different than Americans: this kind of environment necessitates cooperation over individualism.

It got me thinking about how our environment and cultural background affect the art that we create, even when we have access to influences from all over the world thanks to the internet. Canadian culture is a little bit hard to pin down, as we often just define ourselves in contrast to our neighbours South of the border. But there are a couple of concepts that I was raised on that have definitely worked their way into what I create.

The first is the ideal of a “mosaic” rather than a “melting pot.” The idea here, for those of you who weren't entrenched in this stuff growing up, is that people coming to Canada don't simply assimilate to a uniform Canadian national identity, but rather contribute to our collective culture by bringing their own cultural background with them. If you check out the first page of my comic, the influence there is pretty explicit and was intended as a sort of tongue-in-cheek reference. I wanted to create a place where diverse cultures and types of people were celebrated as being an asset, and something that makes their planet unique.

The second is that as a child I was always told that Canada was a peace-keeping nation rather than a warring nation. As an adult I know that’s more myth than reality, but it's still something that I absorbed into my worldview. I was also raised by Buddhist parents and in a community with a large Mennonite population. Basically, nonviolence was an important aspect of my background growing up. It may be partly as a result of that, that I've never had any inclination towards featuring any kind of combat in my comics or other art, other than maybe the odd slapstick-y sucker punch. I didn't even notice until someone pointed out that Dee's ship has no weapons.

How does your cultural background - national, religious, or otherwise - affect your work?

@HippieVan & @bravo1102: That's some great interesting info. Thanks for that! I knew that Platt is often linked to Mennonite communities, although I'm not sure why, and also that there used to be and possibly still is a significant Platt-speaking community near New York, I think in Hoboken and North Bergen, where immigrants from Northern Germany landed in the late 19th and early 20th century. So what you're saying totally fits the picture. Btw. Pennsylvanian Dutch is something completely different, although I could probably understand most of it.

This is a subject I think about a lot. We have the illusion of a global shared culture because of the internet and shared language, but there are a LOT of striking differences. I had to think about those a lot initially when I created Pinky TA- if I had too much Australianisims in there Americans just wouldn't get it... But reather than trying to fake an American feel I tried to make it more neutral, but also have some more Australian type personalities in there to spice things up and add a touch of flavour.

On a visit to San Diego was the first time I ever saw a bus driver greeted by name! Al the passengers seemed to know him and he knew all of them to. It was very strange for me to see.

I didn't know about the multiple bus company thing till I visited Sydney. It was really, really crap compared to the state run system we had in Perth- more expensive and the tickets weren't transferable between other buses (even with the same company !) or other modes of transport.

There has been some recent research looking at 18th Century newspapers in Pennsylvania and it revealed that fear of foreign immigrants is not new, nor are any of the arguments or rhetoric. Awful funny to read an editorial about foreign speakers who refuse to assimilate and are taking all the jobs and it's Benjamin Franklin writing about the Pennsylvania Deutsch decades before the American Revolution.

My next door neighbor spoke Platt deutsch as well as Sudd deutsch. In my high.school German class i had learned Haupt deutsch with a Bavarian accent. ;-D Then there's the different English my mother and father spoke when they met. She was a New York City bobby soxer and he was a rural Virginia boy who had run away to join the merchant marine. Took weeks before they fully understood each others supposedly common language. By the way my wife is descended from Mennonite Germans who settled in Pennsylvania and much later Hungarian immigrants. I'm Slavonic Low Russian and Jamestown Colonist English man. It's not a melting pot so much as a mosaic or patchwork quilt. A whole bunch of different elements coming together to make one thing but still maintaining separate identities. Like the US official motto: "out of many: one" E pluribus unum.

@PaulEberhardt: A bit of a geographical oddity, there are actually lots of Low German speakers where I live! Well, relatively speaking, I mean. They're mostly older folks in the small towns surrounding the city where I live, but my university does offer courses in it. :) As I mentioned in my newspost, we have a significant (German) Mennonite population here. A lot of my small-town friends who are my age know a few words and phrases, but weren't taught to speak it properly.

These days, I draft the pages either in English or in Platt, translating them into the other afterwards, but the cultural influence is always there. I came up with most of the characters in 2006 during a bout of homesickness while studying down in Bavaria. I guess, that's typical for Europe; you just have to drive in any direction for a while and you'll find yourself in a completely different culture, even if you stay in the same country, "German culture" being mostly a grudgingly accepted common denominator. Especially Gundula and her great-grandson are very Northern German characters, in that they are both stubbornly set in their ways and very outspoken, usually maintain a dry and cool, yet not unfriendly, cold manner (except when someone or something gets on their nerves), and they do enjoy a stiff drink. I'm told these traits are typical for us, anyway. I don't really think much about it, you see, I just do what I want and nothing else, just like any real Northerner would. ;)

Master the Tiger is obviously very much about my specific cultural background. I tend to capitalise on that every so often, if the fact that I do a version in Plattdeutsch isn't already a giveaway. I mean, let's face it: it's a minority language, and it can't possibly have that many speakers around the world, let alone ones who read webcomics or who can use a computer for that matter. (Nevertheless, it must be said that at least in theory there are probably more active Platt speakers than, for example, of all the far more well-known Celtic languages like Irish and Scottish Gaelic and Welsh combined. There are some in the USA, and apart from its official status in Germany it's also a recognised minority language in other countries, e.g. in Mexico - see https://en.wikipedia.org/wiki/Low_German if you're curious). At any rate, Platt is a treasured cultural heritage in my region, and my comic is very much shaped by the language and the culture it is part of.

I think it more than evident in my case XD But you are very right! The way we approach the cosmos is greatly filtered through our culture/cultural background, in the same way that we always do arithmetic in our native language, no matter how fluent we are in other, formally learned languages. One thing that is definitely cultural to Greeks is a deep set suspicion of the "state" and every concept of government (unless it is Swiss). It hails back from the time of the Turkish occupation and its crazy, cruel laws against Greeks, and unfortunately was only reinforced by the puppet governments of Greece's forming years as a modern country (after 1830)... and right now, as is more than clear, we're getting even more reinforced to consider the state our natural enemy to survival and/or prosperity. That has led Greeks to always have contingency plans, and always look for loopholes in state legislation.

Lol. I didn't know cities could have multiple bus systems until I visited Buenos Aires. Rural US has *no* public transit, though. Pain in the butt.

@ub: haha, Canada and the US are indeed different - I didn't even know having different "bus companies" was a thing! The city runs all of our buses, and they're subsidized by the municipal government. I can't imagine how expensive the fare would be for a privatized bus system. I definitely recognize a lot of the drivers on the route I take most days, but have almost never spoken to any of them.

@HippieVan: Biggest "city" in WV, and my friend knows the drivers on her usual route. There's only one bus company, though. It's like the demo city in a video game. XD

@usedbooks: Yeah, I live in a mid-sized city and I can't say I've ever greeted a bus driver by name! I do always thank the driver or wish them a good day when I get off the bus, though.

Biggest cultural influence was thanks to my wife, who's Cambodian. Her folks fled Cambodia at the end of the Khmer Rouge's reign, so I heard some stories, which helped shape Savunn's character in Fusion, and I'm sure influenced the story a lot with the Darmar storyline. Other than that, general geek culture had a huge influence as well.

I grew up in a small town and went to college in what passes for a"city" in West Virginia. I work in nature-prominant places where you have to travel 40 minutes to get groceries. My comic is set in a big city. I love traveling to cities, but not having lived in one, I'm sure it colors my comic in strange ways. Like characters greeting their bus drivers by name. I also love surrounding myself with pets and wildlife -- and I can't stand anthropomorphism. So my comic contains pets acting like animals and a lot of background wildlife where it fits.