Improve Your Drunk Duck Award Winning Game By Creating a For Your Consideration Page! 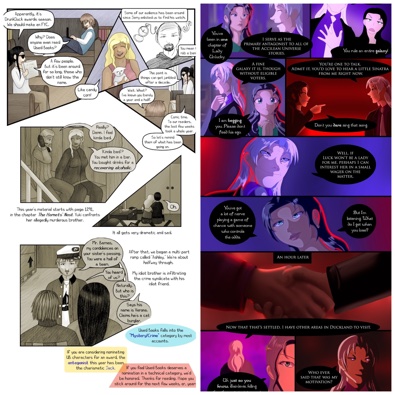 FYC Examples by usedbooks and Whirlwynd

In less than one week, voting will open for the 2017 Drunk Duck Awards. In the past, the initial voting comes in the form of a Google Doc where you fill in nominations for comics that are the best fit for each category. Once the nominations for the comics have been counted, the top nominees for each category are sent to the judges to deliberate and select the winning comic.

Currently, For Your Consideration (FYC) pages are being excepted this week. FYC pages are like mini commercials or banners to get your comic to the forefront of the voter's mind when they are filling out nominations early in the awards selection process. You see, if you create a FYC page, the likelihood that your comic is nominated for a specific category goes up, way up! Niccea loves submissions and posts them directly on the 2017 DD Awards webcomic.

Here are the official categories that will be on the ballot next week:

Best All Ages Comic:
Child-friendly comics that the whole family can enjoy.

Best Community Project:
Comics and projects that bring together a variety of DD members for
massive synergy! (DD Awards are not eligible, for giving ourselves an
award would create a paradox vortex from which there is no escape.)

Best Drama:
A story focused on a real world setting and is character-driven with a focus on emotions. Courtroom dramas, medical dramas, crime dramas, romantic dramas, high school dramas (but when is high school not dramatic?), etc.

Best Horror Comic:
The dark, scary, and twisted. Monsters, psychological thrillers, and
ax-wielding psychos all have their place among these wonderfully
horrific comics.

Best Humor Comic:
Gags, jokes, lols, roflmaos, and such. Format and subject matter aren't important. It just has to make you laugh.

Best Parody/Tribute:
Comics that use the characters, worlds, or creations of other creators. It's not copyright infringement! It's an homage!

Best Philosophical/Political Comic:
Make-you-think comics that address deep topics from the spiritual and philosophical to the cultural or political.

Best Sci-fi Comic:
A form of speculative fiction so named because the fantastical
elements are rooted in or explained by actual or fictional scientific
theory.


Best Superhero Comic:
Too super for other categories.

Best Character Design:
The artistic design of the characters. This includes anatomy, facial
expressions, and clothing (but not speech, mannerisms, or
personality/actions).

Best Comic Layouts:
The components of visual storytelling that harmonize the artwork
into a page and direct flow and pacing. Includes panel shape and
position, placement of speech balloons, lettering, and general
readability.

Best Dialogue:
It's all about what they say and how they say it.

Best Plot Development:
The overall story composition and pacing, and the use of storytelling elements.

Most Improved Art:
The comic that shows the most artistic improvement between July 2015 and now.

Best Protagonist:
Contrary to popular belief, the protagonist is the main character of the story whether they are good or evil.

Best Antagonist:
Opposes the protagonist. Doesn't necesarily have to be evil
incarnate, it could be Superman in a comic about Lex Luthor for example.

Best Supporting Character:
A noteworthy secondary character; can be good, bad, or other.

USER AWARDS
Outstanding Achievement Within the Community:
The
user that will win this award is always there to particpate in the
community no matter what. These people show their support for the site
within the forums and by participating in community projects.


Most Dedicated Creator:
That creator who seems to be a page-making machine, every day on
time – or maybe the one who has been at it forever and has a thousand
pages of the most amazing quality – or the one who is updating five
different regular comics on a schedule. Whatever they are doing, they
sure are DEDICATED.

Most Supportive Reader:
Maybe they leave the most comments or the most insightful ones, or
they draw wonderful fanart, or they are always available to discuss your

script ideas or send you cards when you're on hiatus.


Best Newcomer Award
Awarded to a newcomer who has come to the site who has really stood out. They could be creators or dedicated readers

Create Your Own Award
Didn't see the proper award for the comic/person you were thinking of on this
list? Make one up. Create your own award and give it a winner. Best
awards will be chosen by a dedicated team of judges.
Last call to make changes to categories (and to help with a short description for the Drama A.ward)

Readers' Choice Award: Presented to the comic that received the most votes overall.


So spend a little time working on your For Your Consideration pages for greater returns in the Awards Season.

Please submit all FYC pages in a PQ to Niccea at:

Jason Moon, if you haven't worked it out yet, upload it to the Image Locker in the User Control Panel (Or elsewhere) then PQ the link (Not the http://media.drunkduck.com one, click on it and it'll give you the proper link). You can put it in "[img][/img]" tags if you want, but I don't think it's completely necessary.

Well the world did without one last year because I was on hiatus but this year definitely. You see if your comic is marginal and barely read, but you do a superlative fyc? Mobilize the vote and before you know it the nominations roll in. ;) as we all know from some recent elections, it's not always the wisest voice that gets the votes, more often it is the loudest.

I cant figure out how to send an image in a personal quack. Cant seem to copy and paste an image either :(

OMG, it's THAT time of the year again! Let's see if I can make a FYC page this year. xD

hehe, yeah it was sorta hard for me to make a consideration page with just a couple categories (I wanna be considered for ALL categories haha)... But, I think it's okay to make one for categories you think best fits your stuff... I requested to be considered for 'Best Completed' and for any other a voter deemed worthy...

I really don't expect to win anything either but I have a lot of fun making pages for the award show. I'd say give it a try anyway! (PS, my FYC page is totally an invitation to anyone that wants to collaborate on a mini storyline for the show, muhahaha)

Same as Mika, Part of me wants to put something together, but one look at the categories and it's like, there are so many better fits for everything! Still, might be good for a laugh though. Would be nice to see some more FYCs up though, there's a couple where I still have no idea what to vote for!

I would but I have extremely low self esteem with my works. And I really have no idea what good they'd try and be nominated for. Hopefully there will be some more though this year looks slow for them :(

I'll be accepting FYC pages until the end of next week.

Well, I need to get some time to make a FYC page.