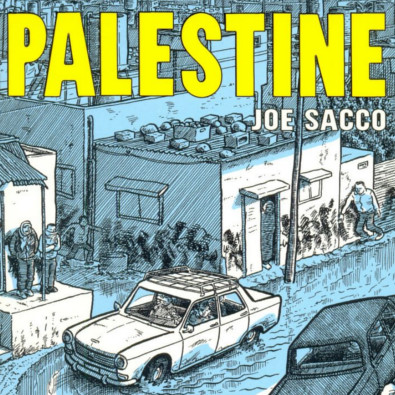 Considering that a lot of comics have politics embedded in their stories or worldbuilding or actively part of their characters’ parameters, what would constitute a political comic as opposed to a comic containing politics?

In my opinion and from the general descriptions of this budding genre, a political comic is one that depicts a close account and insight into a political, historical or social situation, utilizing the plot and storyline to give the readers an experience of that exact situation.

Whereas the political cartoon uses hyperbole and satire to deliver an opinion on an event or political issue, the political comic uses the power of storytelling and immersion into a realistically presented setting.

Stellar examples of political comics would be Maus, Palestine and of course the example I use super often Persepolis.

Through the pages of a political comic, a reader can gain knowledge and experience along with visual representations of what is being described. It’s like looking through the photo album of some other person’s life, and that makes every frame more powerful- perhaps even the motivation to research and learn more on the same issue.

So a political comic is not necessarily about politics (as in political party activities and the like) but it definitely is about how politics shape reality in our world and the impact of those political agendas in human history.

When I started making Without Moonlight, my intent was to introduce the reader to a period of Greek history that is unknown compared to its ancient counterparts, but still just as rich and powerful if only one would take the time to know about it.

I also purposefully didn’t use historical figures as main characters (that will be soon making appearances) because I wanted to avoid painting them in the hue of my own opinion about them by giving them my own narrative/artistic interpretation (especially since most, if not all, are controversial figures), and instead created characters that are avatars of people that lived in and/or survived that era, famous and not-so-famous.

Hahaha Rawdale, you could never do anything political...

I don't write anything deep. No philosophy or politics for me. I can appreciate them in others' works -- but only if I have the mood and energy. Deep stories drain me. That said, I loved Gulliver's Travels. My literature teacher advised me to pick a different book. Nope. I also love everything by Terry Pratchett. And I just watched History of the World Part One for the millionth time, so I guess I do like political stories a great deal - in satirical packages. Maybe my brain is wired to view all our social constructs as ridiculous and demands them to be presented as such.

I have considered making political comics but I don't really follow politics. ;-)

Joe Sacco's work is a must read for everyone I feel. It's a masterclass of not only political comics, but of comics journalism. Ex-Machina was also a political comic though the world was obviously a different reality than our own as one of the World Trade Towers survived 9/11. The premise in a nutshell is an ex superhero becomes the Mayor of NYC and you get glimpses of his brief career in flashbacks as he handles crisis after crisis in the city. It's written by Brian K. Vaughn and was coming out at the same time as he was doing Y: The Last Man and is often overlooked. One of the best war books also came out at that time... DMZ , which covered war journalism and politics surrounding it.

I usually stay out of politics in both fantasy and real life because I am a lover not a fighter and I feel such a topic usually puts me in a position where I don't want to be. What can I say? I have too much love to give, but in the case of ones with history behind them especially when told through the eyes of someone in the middle of it, it can be very insightful. It also gives us a more accurate picture of what was going on and though the real one may not be pretty by any stretch, these kinds of stories need to be told otherwise they remain romanticised and watered down. The true story needs to be told.

I occasionally do political comics. They tend to be the least funny ones I do because they usually deal with issues that frustrate or anger me and I feel I have to say something.

As for my own work it tends to get lost behind the boobs and dolls. Who notices the uneasy peace between the Aordians and Diamorians, or the treaties governing space and then my views on the apathy and Russian fatalism in the Soviet Union.

There were some war comics back in the day that went into politics behind the conflict. There were some good Korean War stories. Some of the Charleton comics did as well as broader storylines in the DC titles like The Unknown Soldier and even G.I. Combat and Blitzkrieg started out promisingly. Marvel's The Nam.

I'd be very interested to read that Falklands War comic!

That Palestine comic looks interesting. That sort of thing is a good primer to the exotic and hard to fathom (for outsiders) events that happened around the world. I'm not big into comics, but I did read an interesting comic book take on the Falklands' War when I was in high school. Persepolis was autobiographical, but fictionalised things like Maus and Without Moonlight work just as well. One important thing to remember: If you're doing a war comic then they're doing a political comic, even if your war and world are fictional. War is just the bloody, ragged edge of extreme politics.