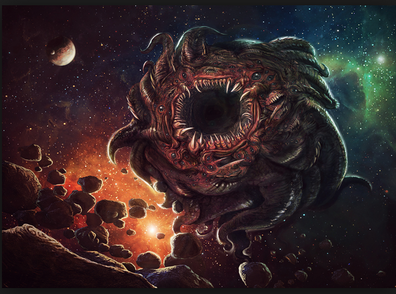 So you've got your maniacs, masked or otherwise. Scary! Or how about savage animals from, whether realistic or altered in some way? Or maybe monsters like vampires, zombies, were-folk and…er…mummies are your jam? Or what about ghosts, spirits and alien beasties?

When it comes to horror fiction, though, none of it is as frightening as the cosmic horror story. Created and exemplified by H.P. Lovecraft, of course, this is horror about the unknown and the unknowable.

Bizarre critters and incomprehensible forces that can destroy our entire planet (and beyond) with barely a thought. From strange places that don't follow our own laws of nature, these Abominations are terrifying by their chaotic power as well as their ‘otherness’. 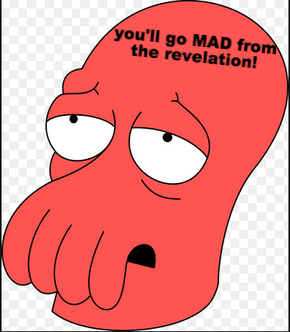 I guess these kinds of stories are metaphors for existential fears that our lives as humans are as meaningless and futile as they are fragile. A deeply chilling thought!

Do you like cosmic horror stories? What are some of your faves?


I have to go now; I hear the *shloop *shlurp of something pushing against my front door…

Looks like some of us prefer Lovecraft Lite ;) -- http://tvtropes.org/pmwiki/pmwiki.php/Main/LovecraftLite

I also have a preference for stories with Lovecraftian elements that have a more positive or hopeful element. Much as I love the terrifying notions of those Horrific Others, give me a Hellboy or a Sisterhood or a Doctor Strange to stand against that overwhelming hopelessness and darkness!

@Bravo: Nice! See, I can deal with Cosmic Horror as long as there's people like Sisterhood of the Golden Goddess that can (often successfully) fight them without it feeling like just hopeless luck when they win, and without the feeling of just it being just a temporary reprieve; that the Cosmic Horrors will inevitably prevail in the end... cuz nuthin' matters!!

@kimluster: now you know how and why I developed my concept of the sorceresses and the Sisterhood of the Golden Goddess. They are the representatives of the Gods of Light who fight THE THINGS MAN WAS NOT MEANT TO KNOW in the universe. Searsha once faced down Deep Ones and Yog-sothoth. Jennessia fought followers of Hastur.

Love Lovecraft. Read everything by him and most of the other authors who added to the Cthulhu mythos as well as Poe who really presaged and hinted at a lot of it. In all the stuff I've done it's always there but they don't necessarily talk about it.

Great article Banes! Lovecraft is my favorite horror author (sorry Stephen, you're so close XD). The space itself is a massive source of horror, everything, from books, movies, videogames and of course comics, the scariest/dangerous things come from space.

Great article Banes! "The Thing" and xenomorphs from "aliens" always terrified me as a child. There is a xenomorph comic that is scary. As a kid I loved reading the comics that had predators hunting xenomorphs and creatures on other planets.

Love this sort of stuff! (And what a coincidence that this is the sort of stuff that is being foreshadowed a bit in Fusion for an upcoming story.) The concepts of things defying comprehension and things lurking in and out of time really gets the mind churning. For all the praise Walking Dead gets, I think the cosmic apocalyptic world of Mike Mignola's Hellboy universe (especially B.P.R.D. and the Abe Sapien stuff) is a lot more interesting (and a far superior series, IMO).

Ohhhhhhhh man! I read that title and was instantly involved! We love us some cosmic horror, so much so we went and weaved it into our own story! The birth of cosmic horror is really a reaction to a society both intrigued and terrified of science as it began to strip away the notion that man was the centre of god's eye. We were on the cusp of this burgeoning knowledge that we were at the mercy of a universe that had no consciousness let alone one that took care to ensure our happiness. Cosmic horror is at its best when you feel that there is not rhyme nor reason to living or dying; that the powers that be could wake and all of this could fade away like a hazy dream. When all your laws, all your morals are striped from you and you are left standing naked, staring into the void and it stares right back at you... ...And it doesn't care.

Hrrmmmm... I have an appreciation for Cosmic Horror, in the same way someone can appreciate Opera but not really like it. I think it may be related to my belief that we humans have true freewill (despite what naturalistic determinism infers...) and that what we do, who we are, in some way... matters! Cosmic Horror takes that sort of thinking and flushes it down to places we Were-Not-Meant-To-Know!! But ya know... in a way, maybe that's sorta the point - I find 'not mattering'... horrifying! Even with movies and stories that hint at Cosmic Horror, I prefer the idea they can be defeated... somehow! Like in Hellboy, when ol' Big Red used his WILL to choose to not be the Gateway for the Cosmic Monstrosities to enter our world... And he stopped them! I sorta toyed with that in The Godstrain. While the Godstrain never appeared as a classic cosmic horror, it was obviously extremely powerful, and largely unknowable... but Kimber Lee still managed to win out.... Or did she...?!! }:)

Could anyone reccomend me a good scary cosmic horror web comic?

The doom that came to Drunk Duck.

They're great! They make the evil far less tangible and comprehensible.