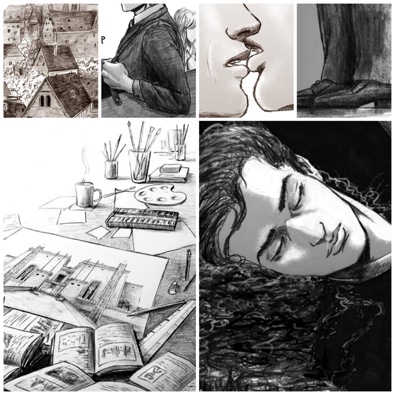 Apollodorus Kratos is a dashing, young artist and scholar of archeology stuck in the shadows of his deceased father and floundering relationship with his female colleague. He is generally an observer who captures secret glances of couples at train stations in his sketchbook. After speaking publicly at a conference, he crosses paths with something or someone from his past.

The comic is read right to left and makes use of artfully crafted grayscale and sepia toned color schemes. The usage of neutral colors is very pleasing on the eyes and complements Kratos' sketchbook drawings.

If you want to experience the true longing of a hidden love, then read Reversion by Kabra Kare, rated M!

Thank you for your recommendation! =)

Yes, it is reminiscent of Tantz Aerine's work (that's a pretty big compliment)!!

Reminds me of Tantz Aerine a bit, fitting because she's Greek as well. Lovely style!