The Use of Customs and Folklore 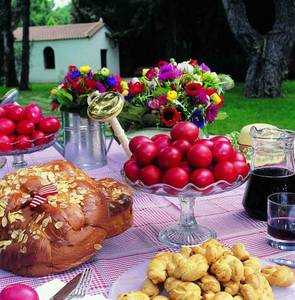 It is Orthodox Easter Week, and currently it's Resurrection Saturday, easily the most important day in the Greek Orthodox year. In Greece there are a ton of customs and festivities that have been taking place all through the Holy Week, culminating to today and tomorrow, Easter Sunday. One can argue that for Greece, Easter is more important than Christmas.

So thinking about what to write for today, I couldn't get the idea of customs and folklore out of my mind, and I thought to discuss the narrative value they have in webcomics (and other narrative works as well).

Displaying holidays, religious or not, and the customs attached to them is a great way to illustrate the outlook and approach of a culture to the cosmos and the human condition. What is important, what is celebrated, how it is celebrated serve to pull the audience in the culture and make them partake and experience it, and thus identify with the carriers of that culture more. If then that culture is threatened by some outer element, then the audience will care and worry about its survival, thus raising the stakes of the story.

In the same manner, adding cultural elements and customs to the story can tell us a lot about the characters of the story as well!

How much a character complies with the customs, in what way they comply, how much they invest in them or whether it is simply pedestrian for them says a lot about a character's connection to part of their own culture, and even elements of the society they have grown up in, or historical times.

For example, a lot of the customs traditionally observed in Greece didn't take place during the WWII occupation, or did in very odd or cryptic manners. A lot of religious ceremonies took on political and revolutionary meaning.

I also observe some of the customs associated, say, with Easter in Greece, but not others, and I have reasons for both partaking and not partaking in them, and that says a lot about me and my religious and social convictions as well, to the person that knows about them.

In the same manner, adding this sort of flavour to our characters and our settings makes everything feel more ingrained and more realistic, helping provide a more encompassing experience of the story for our audience.

I'd say it's practically impossible NOT to put some your own cultural background into a comic. Every now and then I get comments about how much people learn about mine and I'll grant that I sometimes include parts of it on purpose. But just as often I'm not even aware of having put any of it in there until I'm told.

I remember an orthodox Easter celebration done by expatriate Georgians (the Caucasian republic, not the US state), who were so kind as to invite me. Boy, they know how to party! :)

Gunwallace: haha! Well played, sir. // Bravo1102: Yes of course, for everything there is a golden ratio. If things are too crammed in, it won't feel natural anyway as nobody (not even in Fiddler on the Roof where they had a dedicated song to customs) observes tradition every single day. At least not official stuff. As for Easter, that makes two of us ;) // Zaptoid56: Clearly it wasn't a place for a charming fellow like you :) // Ozoneocean: I put that in just for you. :P

Customs are always good to put in a story with international travel. I declare, just the sound of the latex glove being put on is sure to get a reaction. ;-)

Putting in customs and folklore is so easy when creating a fantasy world. It's hard not to overwhelm a reader with tons of customs just to show off the created world. How I miss that kielbase dinner at my grandmother's sister's house way back when I was a kid. As a child I always wondered why we went the week after everyone else had celebrated Easter. ;)

Had to get that out of my system! ^_^ I have never thought of adding this dimension to Piny TA. I don't think I will... It would be really cool in Bottomless waitress though.